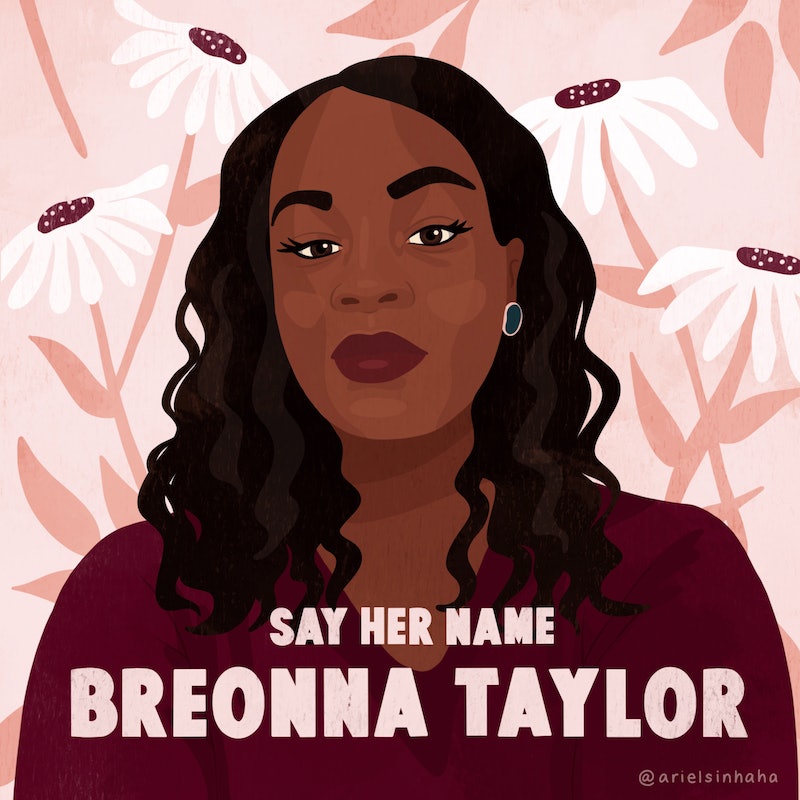 On Mar. 13, 2020, three plainclothes police officers used a battering ram to enter Breonna Taylor's apartment unannounced, with a "no-knock" warrant, looking for a suspected drug dealer in an ongoing narcotics investigation, according to CNN.

Taylor, 26, and her boyfriend, Kenneth Walker, 27, were sleeping when the police entered. Walker thought someone was breaking into their home and shot one bullet out of self-defense, according to the Courier Journal. The police shot at least 22 rounds, hitting and killing Taylor with at least eight. The shots also flew into a neighbor's house, where a pregnant mother and her 5-year-old were asleep. Upon further investigation, the Louisville Metro Police Department (LMPD) discovered that the suspected drug dealer didn't live at Taylor's apartment and was already in police custody at the time of Taylor's death. Demands for justice for Breonna Taylor echoed across the U.S. after no formal arrests or charges were made in the immediate weeks following her death — and continue a year later.

Taylor's death is one of many killings of Black people by the police, among them George Floyd, 46, and Tony McDade, 38, whose deaths sparked a reckoning for racial justice across the country. Taylor was an essential health care worker, working at the front lines of local hospitals during the coronavirus pandemic. She was an award-winning emergency medical technician, and she hoped to one day become a nurse. She would have turned 27 on June 5, 2020.

"Too often, the Black women who are victims of police brutality take a backseat to the men who suffer the same," Cate Young, a freelance writer, and creator the #BirthdayForBreonna campaign tells Bustle. "It stung that her death was not seen as critical enough for people to take to the streets, and coverage of the protests has not named her."

The #BirthdayForBreonna campaign included a series of tangible actions and virtual protests to honor Breonna Taylor, and amplify the stories of Black women killed by police. Young, with the help of activists Victoria Wilson, Jane Shin, Jill Cartwright, Zosha Millman, and artists Ariel Sinha and Ayla Sydney using Taylor's birthday as an opportunity to inspire people to honor Taylor and fight for the justice she deserves.

In the months after Taylor's death, both local and national changes inspired by Taylor. As of June 11, an ordinance called "Breonna's Law," banning no-knock search warrants and mandating that officers wear body cameras during searches was unanimously passed in Louisville, Kentucky, according to CNN. That same day, Kentucky Senator Rand Paul introduced the Justice for Breonna Taylor Act, a bill prohibiting no-knock warrants entirely in the U.S.

Following the death of David McAtee, a Black restaurant owner who was shot and killed by the Kentucky National Guard during a June 1 protest in Louisville honoring the deaths of George Floyd and Breonna Taylor, Steve Conrad, the Louisville police chief, was fired. On June 23, the city's new police chief, Robert Schroeder, fired Brett Hankison, an officer-involved with Taylor's unlawful death. On Wednesday, Sept. 23, 2020, a Jefferson County grand jury decided to indict one out of the Louisville, Kentucky police officers for the murder of Breonna Taylor. Detective Brett Hankison was charged with three counts of "wanton endangerment" in the first degree by a grand jury, a charge significantly less severe than manslaughter. The two other officers involved in the case, Sergeant Jonathan Mattingly and Detective Myles Cosgrove were not indicted. This decision comes more than half-a-year after the 26-year-old was killed in her home by the Louisville police.

While these efforts along with the indictment of Detective Hankison are an important step in combating police brutality and systemic racism, they are a small step in the fight for justice. Here is how to continue to demanding justice for Breonna Taylor.