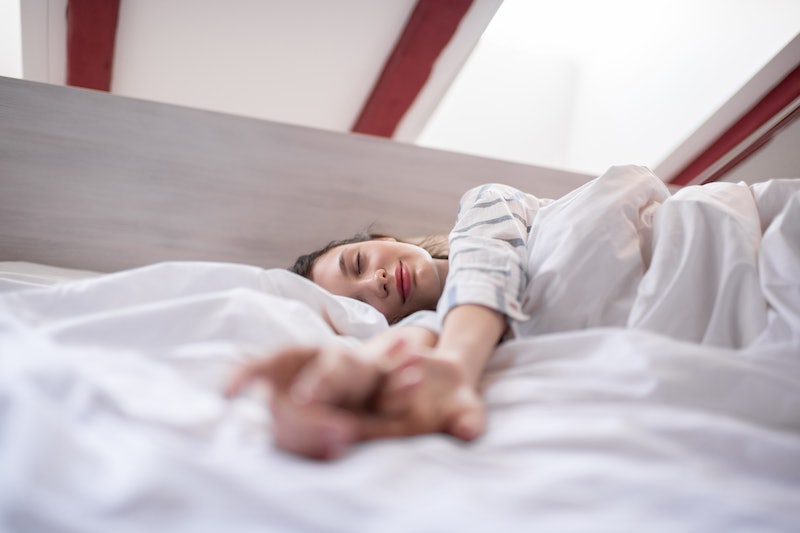 If you absolutely must spend seven to eight hours asleep, wouldn’t it be great if you could spend that time with, say, that guy you met on vacation a few years ago? You know, the one who took your heart on a Vespa ride, Lizzie McGuire-style? It sure sounds a lot better than the doomsday dreams you’re having most nights.

TikTokers have long understood the appeal of figuring out how to dream about someone, from saucy romps with forbidden lovers to transcendent visits with loved ones from the other side. Videos that use the #dreams hashtag have 3.5 billion views. Many of them feature dream hacks, like how to make a cameo in someone else’s dream or how to have a lucid dream. And while the concept of bossing the sandman around might remind you of the antics you’d get up to at a middle school sleepover party, there’s actually nothing far-out about influencing your dreams so that a certain someone shows up.

According to dream analyst Layne Dalfen, there are very practical ways to intentionally dream about someone. “All parts of the dream are parts of you,” Dalfen says. “You're the director, the producer, all the actors, and the playwright.”

Even if you’ve tried and failed to manifest your great-grandmother into your dreams so you can ask her about where her funky snake ring came from, Dalfen says that your dreams are never random. “Who appears in your dream, your dream story — it’s always a reflection of what’s going on with you, and once you uncover it, you’ll realized how sophisticated the unconsciousness is,” she says.

The key to intentional dreaming, she says, is getting in touch with your subconscious and looking for signs you might be missing in the dreams you’re already having.

How To Dream About Someone

When people talk about having control over their dreams, they’re usually referring to lucid dreaming, where you have awareness that you’re dreaming. In a lucid dream, you have conscious influence over what happens, so you could theoretically bring in whoever you want to see.

According to Rebecca Robbins, Ph.D., resident sleep expert at Oura Ring, lucid dreams are common, but hard to study as all the data relies on self-reports. If you’re up for the challenge of lucid dreaming as a way of controlling who you dream about, Robbins points to the techniques of Stephen LaBerge, Ph.D., a leading lucid dreaming researcher. Robbins recommends LaBerge’s suggestion that upon waking, “You focus on a unique event that took place in the dream, then recite, ‘The next time I am dreaming, I want to recognize that I'm dreaming’.” This pathway to the lucid state — and other pathways that are popular on TikTok, like sleeping in different rooms, or sleeping and waking at the same time nightly, or in cooler temperatures — don’t work for everyone. But when you are able to lucid dream, it’s because you’ve managed to keep your brain in a slightly active state while dreaming; that’s why you’re able to hold onto a degree of consciousness even while asleep.

Another way to increase your chances of lucid dreaming is to simply spend more time sleeping. Robbins says that much of lucid dreaming is accomplished in a REM state, where “memory consolidation improves, and learning and problem solving happen.” This is the most mentally active state of sleep; the more time you spend in it, the greater chance you have of experiencing a bonus, extra-active REM cycle that veers into lucid territory. You’ll know you’re there if you’re suddenly aware of the fact that you’re dreaming, at which point you can call upon your desired guest.

How To Dream More Intentionally

Another way to dream about someone is to make them a fixture in your subconscious. Then, you’ll let your mind do the rest of the set design and storyboarding for you. Think about the time you spent all day stressed about a work presentation, and then dreamed about showing up for work in the nude with a corrupt file. The presentation meant a lot to you, so you couldn’t avoid the spillover into your dreams. When you’re focused on someone in the same way, they’re more likely to pop up in your dreams.

“A dream is the conversation that you're having with yourself, and it's always something that you either thought about or that happened to you,” Dalfen says. “So when we go to sleep at night, we prioritize the one thing that's bugging us the most, and all of your dreams are going be about that same subject,” she adds. The key to dreaming about someone in particular is to make sure that they’re living rent-free in your head.

If you want to be “bugged” by a certain someone in your dreams, Dalfen says to spend some time meditating before bed. “As you’re falling asleep, try to imagine a periscope coming out of the top of your head calling to them.” Another method is to start thinking about them earlier in the day. “Write it down on a piece of paper and keep it with you and look at it a couple of times and ask yourself what you want from this person, what problem you want them to solve, what you hope to learn from them, what spending time with them would mean, and then put paper under your pillow.”

How To Interpret Your Dreams For Missed Signals

If you’re spending a lot time thinking about someone, but they’re not showing up in your dreams, Dalfen says to look harder. “You might think that you did not dream about the person that you wanted to dream about, but you probably did; it's just that the story or the pictures didn't look how you imagine them to look, because the language of the unconscious is the language of metaphor,” she says.

For example, if you had a dream about a childhood pet when you were trying to have a dream about John Mulaney, take the time to zero in on what your childhood pet represents to you. Cute and cuddly? Sure. A reminder of youth? OK. A lesson in responsibility? Why not. Dalfen says to go even deeper. “What are the personalities traits that you attach to that symbol? How do they make you feel? What were they doing? What do they mean to you?” Answering these questions might make you realize your dreams are more inline with your waking desires than you realize. Maybe Mulaney showed up in the form of the Cosmo the dog to share an ice cream cone because Cosmo always reminded you not to take things too seriously, which is an association you have with Mulaney, too. It might sound like a stretch, but Dalfen says the subconscious is “just that clever.”

Why You Can’t Make Someone Show Up In Your Dream

If you are completely unable to draw any connection between John Mulaney and Cosmo, don’t push it. But maybe think about why you’re trying to dream about John Mulaney in the first place. Dalfen says that if you’re not dreaming about someone, you probably don’t really want to. “It has to be someone or something that is deeply resonating with you, touching your core, and you are looking for a solution that only they can help you find,” she says.

“Some people think about somebody consciously because they're already thinking about them subconsciously,” Dalfen says, explaining that this is why it seems easy for these people to cast their dreams. When someone is truly on your mind in a meaningful or impactful way, they will show up in your dreams in some form — and likely remain in a recurring role until you figure out why you wanted them to hang out in your dreams in the first place.

Do you miss your ex, or is there something off in your current relationship that has you looking for answers in the past? Are you thinking a lot about your aunt, or is she kind of woman who stands up for herself in a way you aren’t in your waking life? When you understand why you want to spend time with the people on your dream cast shortlist, you have a much better chance of actually having a meaningful nighttime rendezvous.