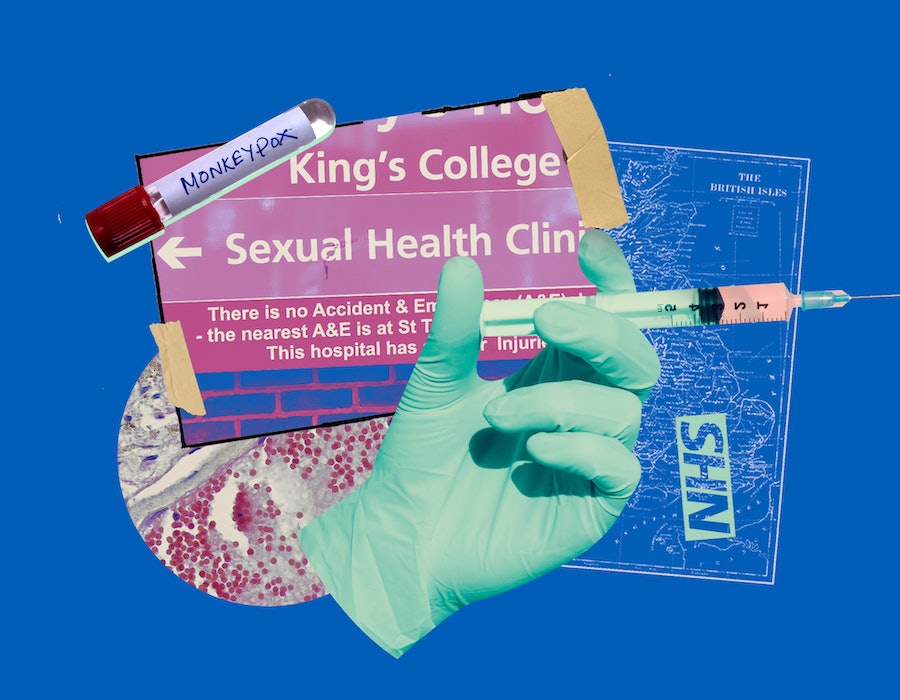 As the Monkeypox outbreak continues in the UK, those most at risk are being encouraged to get the Monkeypox vaccine. However, on Aug. 15 it was reported that the UK’s Monkeypox vaccine rollout faced significant delays due to dwindling stocks and delayed deliveries. Per the BBC, the UK Health Security Agency (UKHSA) claimed it is trying to “expedite delivery” of a further 100,000 doses. The agency predicted that the UK’s current supplies will run out in August, and isn’t expecting new doses to arrive until the end of September. In an effort to combat dose shortages, three NHS sites in London and Manchester will be offering eligible patients smaller but “equally effective” doses of the Monkeypox vaccine.

As of Aug. 17 an estimated 33,199 people had received the Monkeypox vaccine in the UK, “one of the highest numbers of doses in the world” accordign to the UKHSA, which procured 150,000 doses for the UK. However, campaigners are calling for more to be done. Speaking to Bustle, leading sexual health activist and co-founder of I Want Prep Now, Greg Owen, said speeding up of the vaccine rollout in the UK was critical. “It’s vital that we move fast while we still have the opportunity to contain this outbreak,” he explained.

“For Monkeypox, we already have a vaccine that works, but the government hasn't ordered nearly enough doses. We have to ask ourselves, why? We need equitable access, where no one gets left behind,” Owen explained.

Echoing Owen’s concerns, the Shadow Women and Equalities Secretary, Anneliese Dodds, told prime ministerial hopeful, Liz Truss, that she is “gravely concerned” by reports of a Monkeypox vaccine shortage. “Those most at risk from this disease need action on vaccines now,” the Labour MP wrote in a letter obtained by Gay Times.

The World Health Organisation (WHO) declared the Monkeypox outbreak a Public Health Emergency of International Concern On Jul. 23. According to international research published in July 2022, 98% of cases outside of endemic regions had occurred in men who have sex with men (MSM), and 95% of those infections had occurred through sexual activity. As of August 22, there were 3,207 confirmed cases of Monkeypox in the UK.

Keep scrolling for everything you need to know about getting the Monkeypox vaccine in the UK.

What Is The Monkeypox Vaccine?

Monkeypox is caused by a virus similar to smallpox. Therefore, a modified version of the smallpox vaccine — otherwise known as Modified Vaccinia Ankara (MVA) — is being offered to those most at risk of contracting the virus, as it should provide a good level of protection.

The use of the MVA vaccine was recommended by the Joint Committee on Vaccination and Immunisation (JCVI) to help “prevent or reduce the severity of the Monkeypox infection.”

The vaccine currently being offered in the UK and Europe is being distributed under the name Imvanex.

As mentioned, three NHS sites in the UK have begun offering mini doses of the Monkeypox vaccine to maximise the use of the current vaccine supply. This involves giving a patient a 0.1ml dose rather than 0.5ml. Some studies suggest this method will still offer significant protection against the virus.

“Adopting this tried-and-tested technique will help to maximise the reach of our remaining stock, including the 100,000 doses due to arrive in the country next month — potentially enabling us to offer protection for many more thousands of people,” Dr Mary Ramsay, Head of Immunisation at UKHSA, said in a statement.

How To Get The Monkeypox Vaccine In The UK

If you’re unable to contact a clinic directly, it is advised that you call 111 for advice. Other useful resources for information on the Monkeypox vaccine include the Terrence Higgins Trust Direct Helpline.

Following the social media accounts of your nearest sexual health clinics could also be an effective way of keeping up to date with your local Monkeypox vaccine rollout.

As stocks of the vaccine run low in the UK throughout August and September 2022, securing a new appointment for a pre-exposure vaccine will become increasingly difficult. As per the BBC, it is believed those who already have a scheduled appointment should still receive a Monkeypox vaccine.

The MVA vaccination is free and only available through the NHS to eligible groups. As of writing, those eligible are being offered one single or a mini dose of the Monkeypox vaccine.

Who Is Eligible For The Monkeypox Vaccine In The UK?

According to the UK Health Security Agency (UKHSA), those currently eligible for a Monkeypox vaccine in the UK include healthcare workers who are caring for and who are due to start caring for a patient with confirmed monkeypox, gay, bisexual and other men who have sex with men (GBMSM) who consider themselves “high risk,” and people who have had close contact with a confirmed Monkeypox patient.

The UKHSA advises that you should get vaccinated as soon as you’re invited to do so. If the Monkeypox outbreak in the UK continues to rise, a second dose of the vaccine might be offered to those most at risk at a later date.

The UKHSA state that people who fall outside of these eligible groups might be able to get a vaccine once supplies increase.

More like this
Gen Z Are Twice As Likely To Identify As Queer, According To New Data
By Sam Ramsden
What The UK Blocking Scotland’s Gender Recognition Bill Means
By Sam Ramsden
Here’s Where The NHS Nurses’ Strike Currently Stands
By Sophie McEvoy
The UK Government Is *Finally* Banning Conversion Therapy
By Sophie McEvoy
Get The Very Best Of Bustle/UK
Sign up for Bustle UK's twice-weekly newsletter, featuring the latest must-watch TV, moving personal stories, and expert advice on the hottest viral buys.