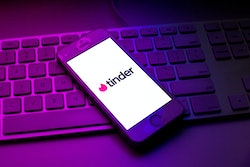 If the true story of Netflix’s The Tinder Swindler — where several women were scammed out of thousands of dollars by a man they met on the dating app — has you worried about your dating safety, you’re not alone. It’s an online dating horror story that nobody ever wants to experience, but unfortunately, it does happen.

A 2021 report released by the Federal Trade Commission revealed that people lose more money on romance scams than any other type of fraud. In 2020, losses due to these types of scams reached a record high of $304 million. That’s up 50% from 2019. But if you use dating apps, you know it can be tricky to spot red flags when you’re behind a screen.

“When it comes to online scammers, it's not just a dating profile that will reveal who they really are,” Susan Trombetti, matchmaker and CEO of Exclusive Matchmaking tells Bustle. “It’s their interactions along with their profile that throw up red flags.”

For example, you’ll want to tread lightly with anyone whose profile only consists of photos of them on jets, expensive vacations, and flashy cars. While flirting with someone who appears to live the life of luxury can be exciting, “it's bait for you to click and go for it so they can rip you off,” Trombetti says. Of course, this isn’t the case for every single person who flaunts their wealth on dating apps. But if anything seems “too good to be true,” it probably is.

Below, experts reveal some signs you may be talking to a scammer on dating apps.

More like this
35 Sexy Texts To Send Your Partner
By Griffin Wynne and Carolyn Steber
8 Flirty Games To Play Over Text With Your Crush
By Lexi Inks
Jess & Anya Are The High School Sweethearts Who Gave Love A Second Chance
By Jessica Morgan
I Want More Sex But My Partner Has ED. What Do I Do?
By Sophia Benoit
Get Even More From Bustle — Sign Up For The Newsletter