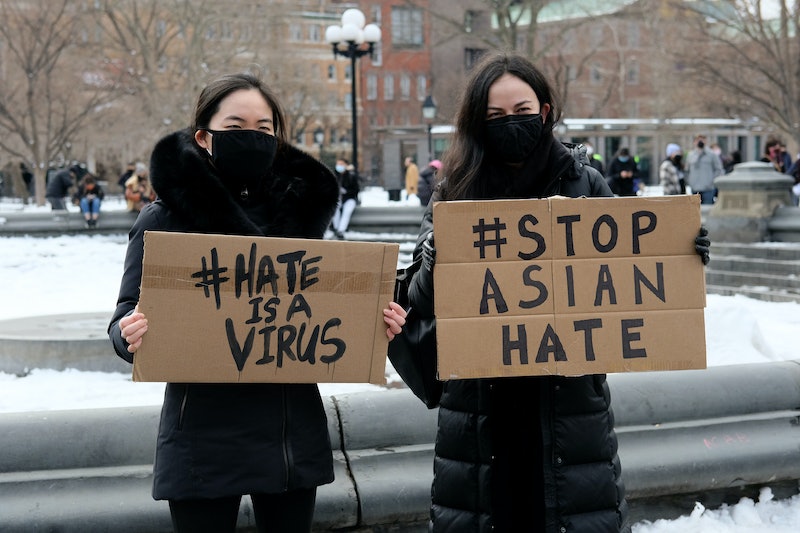 Over the past year, racist rhetoric around the pandemic has inflamed anti-Asian violence across the country. On March 16, eight people, six of whom were Asian women, were killed in mass shootings at three different spas across the Atlanta, Georgia, area, the Atlanta Journal Constitution reported. The 21-year-old shooting suspect was taken into custody, and authorities have not released information about the shooter’s motive, per CNN. The mass shooting follows assaults on Asian American elders in California in January, which triggered a national conversation about how to support Asian American communities following the racist attacks. After the fatal violence on Tuesday night, people on social media are continuing to call for solidarity with Asian American communities, particularly low-income and working class ones.

Hate crimes fueled by anti-Asian racism rose by 1,900% in New York after the start of the pandemic, according to the Queens Chronicle. The paper reported in September that from March to May 2020 alone, over 2,500 race-based incidents against Asian Americans were reported across the country. The Stop AAPI Hate campaign found that one in six discriminatory incidents reported against Asian Americans since the pandemic began were committed against young people.

If you want to show solidarity, you can join AAPI-led efforts to combat anti-Asian racism. That can involve reporting racist incidents or donating to the families of Asian elders. Asian Americans and Pacific Islanders are less likely than other racial and ethnic groups in the U.S. to have access to needed mental health resources, according to a 2015 study, so you can make sure your friends and social media networks know how to access AAPI-specific mental health care. While you're at it, make sure you speak up when someone makes anti-Asian "jokes" about the pandemic, too.

These ways to support Asian American communities in the face of racist attacks are just a starting point, because taking care of each other is a must.

More like this
19 Latinx Therapists & Mental Health Experts To Follow On Instagram
By Kaitlyn Wylde, Naydeline Mejia and Lexi Inks
I Tried The Ice Barrel's Cold Therapy Tool & Now I Like Ice Baths
By Allie Flinn
Got Brain Fog? Here Are The Best Supplements For Memory & Cognition
By Carolyn Steber
Here's Why Your Knee Hurts When You Bend It
By Carolyn Steber
Get Even More From Bustle — Sign Up For The Newsletter

This article was originally published on Feb. 10, 2021