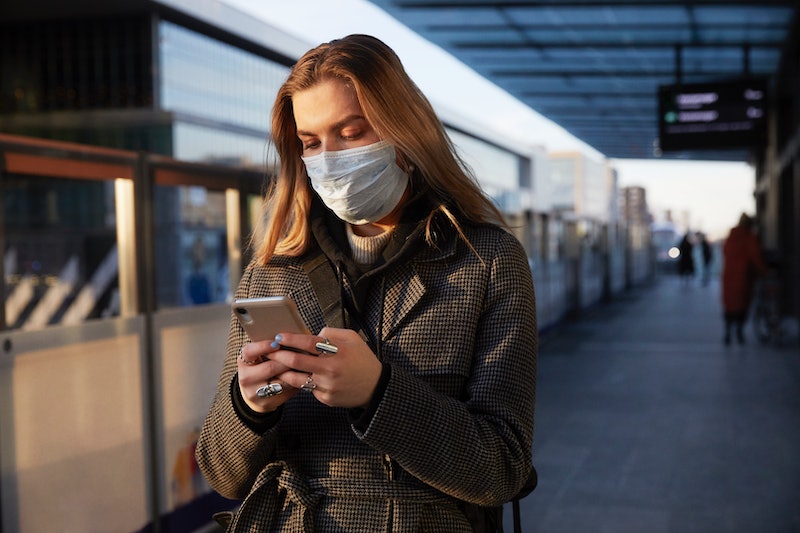 Concerns surrounding the effects of the COVID-19 vaccines on fertility, pregnancy, and the menstrual cycle are causing many to refuse or delay getting the jab. A survey of 55,000 Britons conducted by Find Out Now last December found that more than a quarter of 18- to 34-year-old women said they would decline the vaccine, compared to 18% of respondents overall, with many citing worries about fertility.

With numbers this high, it’s likely that someone in your life is concerned about reproductive health, but conversations about the vaccines’ safety can be difficult to navigate. Health is a private, personal matter that people can be unwilling to talk about, and widespread misinformation can hinder open discussion even further.

If you’re keen to open up a dialogue with someone about reproductive health and the vaccine, it’s important to take the right approach. You’ll need to make sure you have strong, factual evidence to point to as well as an understanding of where people’s fears come from. What you say may be just as important as how you say it.

With this in mind, I spoke to Dr Erika Aquino, public engagement manager at the British Society for Immunology, and Dr Fatima Husain, spokesperson for the Royal College of Obstetricians and Gynaecologists, for some guidance.

How To Approach The Conversation

The first thing to think about when approaching this topic is how exactly are you going to speak to your loved one. Understanding and empathising with their concerns is the first step toward alleviating them.

“Try and understand where they’re coming from,” Aquino says. “If you find out specifically what they are worried about, then you can adapt the conversation.”

In addition to tailoring your talking points to each individual, Aquino also suggests bringing in your own experiences to back up your arguments, avoiding too much scientific jargon, and being mindful not to come across as patronising.

“Try and understand where they’re coming from. If you find out specifically what they are worried about, then you can adapt the conversation.”

She adds that you should be prepared to be turned down. “That person may just not be ready to have that conversation, but leave the door open,” she says. An initial refusal to engage may turn into a productive discussion once they feel up for it. “As family and friends, we are a trusted voice, and you can have quite a big influence on their decision making.”

Facts To Know About: The Vaccine & Periods

Empathy and a listening ear go a long way, but you’ll also need some reliable facts and figures to turn to during the conversation. First up: vaccine and periods. Some are concerned that the jab may disrupt their menstrual cycle, potentially affecting reproductive health in the long term.

As of July 2021, the Medicines and Healthcare products Regulatory Agency (MHRA) had received reports from roughly 13,000 people that the vaccine had affected their menstrual cycle. The side effects included early, late, missed, heavy, and painful periods.

Although this seems quite concerning at first, Dr Victoria Male, a reproductive immunologist at Imperial College London, offered a potential — and benign — explanation. As she told the BBC, vaccines interact with the immune system, which the womb is a part of. It’s possible that the vaccine temporarily affects immune cells, which are responsible for building and breaking down the uterus lining that the body expels during your period — thereby triggering spotting, or earlier and heavier periods.

“Because periods can be affected by lots of different things, you can't assume it's all from the vaccine.”

However, it’s important to note that the link between the vaccine and changes in menstrual cycle is currently unproven. According to Husain, the side effects 13,000 women reported to the MHRA could also be due to many other factors, including other medications they’re taking, the contraception they use, or stress. “Because periods can be affected by lots of different things, you can't assume it's all from the vaccine,” she says.

Facts To Know About: The Vaccine & Fertility

Husain also points out that the evidence so far suggests any changes to periods have been temporary, affecting only one or two cycles, and are harmless in the long term. That is good news for those worried about fertility, whose concerns may have been exacerbated by social media misinformation.

Over the past few months, a slew of conspiracy theory posts arguing that the vaccine is part of a worldwide sterilisation project have been spreading online. Apart from those outlandish claims, unclear communication from the government is also to blame.

An earlier version of the guidance published by the U.K. government stated that it was “unknown” whether the Pfizer vaccine had an impact on fertility, which was used by vaccine sceptics to raise alarm online. The MHRA guidance has since been updated, with the following statement published in August 2021: “There is no evidence to suggest that COVID-19 vaccines will affect fertility and the ability to have children.”

There were similar numbers of accidental pregnancies between the control group and the vaccinated group in trials for the AstraZeneca, Pfizer, and Moderna vaccines.

Although pregnant women weren’t included in the initial COVID-19 vaccine trials, we know that there were similar numbers of accidental pregnancies between the control group and the vaccinated group in trials for the AstraZeneca, Pfizer, and Moderna vaccines. In total, 57 people became pregnant during the trials. That would indicate the vaccines had no effects on people’s ability to get pregnant.

Facts To Know About: The Vaccine & Pregnancy

While some are concerned that the jab may affect their ability to get pregnant, others are worried that once pregnant, the vaccine may jeopardise their pregnancy and endanger the baby. But evidence that the vaccines are safe in pregnancy is also robust. Six studies across four countries involving more than 40,000 pregnant women have shown that the vaccine doesn't increase the risk of miscarriage, preterm birth, stillbirth, or congenital abnormalities.

Husain encourages her patients to get vaccinated before trying for a baby to ensure that their pregnancies are not disrupted by severe infection with COVID-19 — which can cause much more damage to both mother and baby than vaccination.

“My message is very, very clear. I’ve had too many stories of my patients who are pregnant, who may or may not be high-risk, and who have ended up quite ill. I really don’t want to see any of my patients having to suffer like that; that’s why I would strongly support them getting the vaccine.”

“These risks can be protected against by having the vaccine during the pregnancy so that by the time they get to the third trimester, they have immunity built up,” Husain explains.

“My message is very, very clear,” she adds. “I’ve had too many stories of my patients who are pregnant, who may or may not be high-risk, and who have ended up quite ill. I really don’t want to see any of my patients having to suffer like that; that’s why I would strongly support them getting the vaccine.”

Understanding Distrust In The Medical System

You’re now equipped with all the evidence and arguments you need for conversations with your vaccine-hesitant loved ones. One last thing to keep in mind is that distrust of the medical system doesn’t just appear out of nowhere, and understanding the social and historical circumstances within which it emerges is crucial for addressing your family and friends’ worries.

In 2001, University of Maryland academics Diane Hoffman and Anita Tarzian published a seminal paper titled “The Girl Who Cried Pain,” which explored the issue of pervasive gender bias in medicine. And it appears not much has changed in the 20 years since. Women routinely feel unheard by their doctors, especially with regards to reproductive health issues like endometriosis.

Distrust of the medical system doesn’t just appear out of nowhere, and understanding the social and historical circumstances within which it emerges is crucial for addressing your family and friends’ worries.

In the past, medical institutions in both the United States and the United Kingdom have also subjected marginalised communities to medical abuse and experimentation, which adds yet another layer of justified wariness.

Vaccine hesitancy is a complex phenomenon, stemming from both valid and unfounded concerns. However, the fact that these conversations are difficult doesn’t mean they should be avoided all together. A well-informed and empathetic attitude, which takes into account the historical and social context within which fears around the vaccine arise, is the best way to approach a conversation with the vaccine skeptics in your life. As Aquino puts it, “It’s important to [create] an open and safe space for them.”