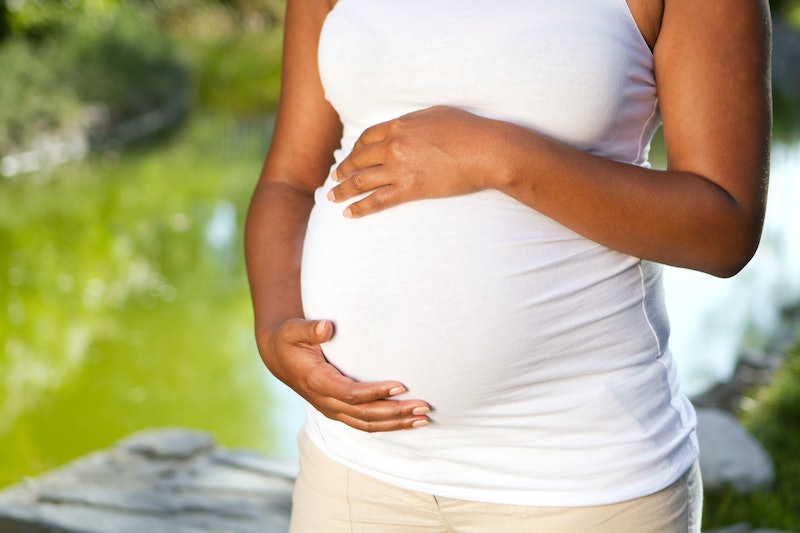 A harrowing study conducted by Queen Mary University London indicates that black women are 1.5 times more likely to experience a stillbirth compared to white women. And another report from Mothers and Babies Reducing Risk Through Audits and Confidential Enquiries (MBRRACE-UK) reports that black mothers are five times more likely to die due to complications during childbirth. Why exactly are mortality rates for black women during childbirth higher? A recent episode of BBC's Woman's Hour has reignited this conversation surrounding black women and maternal mortality, and we need to pay attention.

These worrying statistics could be happening for a variety of reasons, including socioeconomic factors, other health complications, cultural differences, not being listened to, and less access to antenatal care. Speaking to the BBC,Dr Ria Clarke explained:

"We know if you have an unsuitable working and living situation, if you live in poor housing, which impacts on health and outcomes, you can see how that might impact on mortality. We need to talk about the fact black women may not feel that they will be taken seriously, which might make them less likely to disclose how they are feeling."

Professor Shakila Thangaratinam, who spearheaded the report for Queen Mary University London, said there are various factors leading to stillbirths. “The increase in stillbirth risks for black women could be attributed to various factors such as social and environmental conditions, reduced access to antenatal care, and potential increased rates of foetal growth restriction.”

Whilst the report is shocking, it's not totally surprising to me. Talking anecdotally to family members and black friends with children and reading testimonies online, almost all of them had a story to tell about mistreatment in hospitals, or their pain at not being taken seriously. Even someone as high profile as Serena Williams had a near-death experience during childbirth, after her symptoms were dismissed by nurses, thus nearly killing her. And Beyoncé opened up about her preeclampsia after giving birth to twins.

Sadly, there has been a historical mistreatment of black women at the hands of medical industry in the West, which has resulted in a mistrust in the profession. The 19th century physician hailed as the “father of gynaecology” James Marion Sims, invented the vaginal speculum, which is still used today. He was also the first person to develop a consistently successful operation for vesicovaginal fistula, a complication from childbirth. But many are unaware, the field of gynaecology was born out of violence towards black women. As the Washington Post reports, Sims experimented on enslaved black women often without any anaesthesia, meaning some medical advancements only happened at the expense of black women's pain.

The Guardian also reported in 2017 that black patients were half as likely to access pain medicine compared to white patients, which could be due to the false notion that black people have a high pain threshold. Sadly, most studies and reports on racialised medical treatment, including those surrounding black mothers dying, are held in the U.S., making it difficult to quantify the failure of the medical industry for black people here in the UK. It means black mothers have had to rely on experiences in the U.S. to validate their own. This is why these reports are so imperative. It's opening a much-needed dialogue of racialised mistreatment in the medical industry in the UK.

Whilst these reports are distressing to read, uncovering how the British medical industry is letting down black women will only help find a solution to the problems and oversights that are killing black women at a disproportionate rate.

More like this
Gen Z Are Twice As Likely To Identify As Queer, According To New Data
By Sam Ramsden
25 Inspiring Quotes From Black Women To Celebrate Black History Month
By Kyli Rodriguez-Cayro and JR Thorpe
24 History-Making Black Women You Probably Didn't Learn About In School
By Ayana Lage and JR Thorpe
What The UK Blocking Scotland’s Gender Recognition Bill Means
By Sam Ramsden
Get The Very Best Of Bustle/UK
Sign up for Bustle UK's twice-weekly newsletter, featuring the latest must-watch TV, moving personal stories, and expert advice on the hottest viral buys.