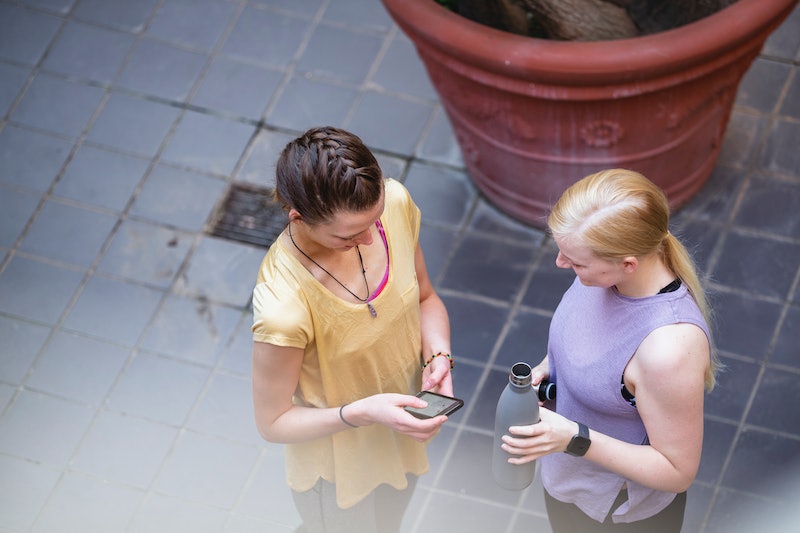 After a year indoors, all Alyssa, 34, wanted was to do something normal: sit outside at her favorite neighborhood bar and have a beer. But as thrilling as it was to see people she knew pass by on the street — other former bar regulars, or neighborhood friends she hadn’t seen during the pandemic — she cringed hearing her rusty attempts at routine social greetings. “How’s it doing?” she heard herself screaming to acquaintances.

“I feel like an under-socialized puppy,” the Georgia-based marketing and public relations professional tells Bustle, “either skittish around people I haven’t seen in a while, or overly enthusiastic, jumping all over folks to hug them without remembering to first ask, ‘Hey, is it OK if I hug you?’”

Alyssa is like countless others who, quite literally, don’t know what to say to people they haven’t seen since before the pandemic. With 43% of Americans fully vaccinated and beginning to party like it’s 2019, they’re grappling with how, exactly, to talk to those COVID made them lose touch with. Though 61% of Millennials say they’re comfortable socializing as of mid-June, a late-March poll found that 38% of Americans felt like they’re no longer able to make small talk. Given the emotional toll of the past year, too, a casual “how are you?” doesn’t exactly open the door to post-pandemic friendship.

In early May, Muriel, 34, who works in nonprofit management, decided to force herself to go back to her office two days a week — not because it’s required, but to help her get reacclimated to being around people again. After her first journey out post-vaccination — an all-day job interview with a prospective candidate she’d be hiring, in late April — she slept until noon the next day. “It was exhausting thinking of every detail all over again. Can I touch the coffee machine? Should I sit farther away from him?” She says her tolerance for talking to people has never been lower, and even as she’s excited to reunite with friends and co-workers, she feels like she’s privately mourning the quiet time the past year afforded her. While she feels excited and engaged while socializing, she almost always needs a nap afterwards. “Just needing to be on the whole time after not talking to anyone except my husband and dogs for a whole year [is really challenging].”

For Alyssa, re-learning how to socialize means navigating both her pandemic-induced awkwardness and guilt over being absent from people’s lives for a year. “It can be hard to explain to friends you are reacquainting with, ‘Hey, I didn’t hate you last year, I was just trying not to die,'” she says, stressing that she was also working seven days a week to keep her business afloat. Saying as much to people goes a long way, she says, especially coupled with her excitement for getting to see them again.

Whitley Louvier, MFT-LP, a New York City-based marriage and family therapist, tells Bustle that she’s been suggesting her clients be “gentle” in engaging in any conversation with someone for the first time since the pandemic. “A lot of us struggled immensely last year … and being mindful of this is an important part of easing back in.” In lieu of better ways to ask, “How have you been?,” Louvier recommends people send check-ins via letter, email, or text with thoughtful messages before seeing someone IRL, allowing both parties the time to figure out what they feel comfortable sharing — whether that’s details about the loss of a loved one or a job, or the stress of sharing a limited number of square feet with a partner 24/7 — when they see each other again.

Even if you botch your words at first, sometimes, just saying anything at all is all you need. “I often joke with friends that I went through a personality pivot," says Muriel. "I used to have so many interests and now I can just talk about plants.”

More like this
What Are The 7 Types Of Rest? Experts Explain
By Carolyn Steber
30 Clever Ways To Slide Into Your Crush's DMs
By Griffin Wynne, Carolyn Steber and Lexi Inks
21 Signs You're Not In Love Anymore
By Sara Altschule, Kathleen Ferraro and Carolyn Steber
How To Politely Reject Someone Who Keeps Asking You Out
By Laken Howard and Lexi Inks
Get Even More From Bustle — Sign Up For The Newsletter