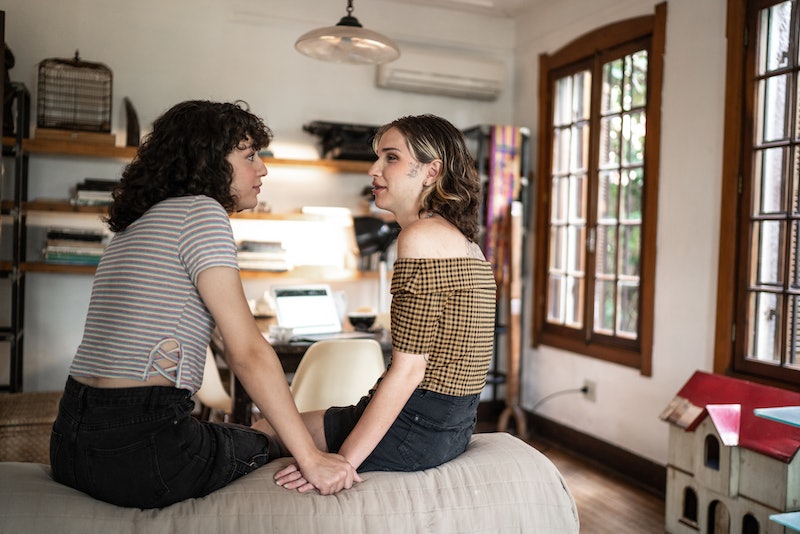 You don’t have to be a therapist to understand that healthy communication matters in a relationship. In fact, research shows that people tend to be less satisfied in their relationships when their partners use detached, angry, or destructive communication styles, and more satisfied with positive, helpful communication styles. But there are some issues that are easier to talk about than others, like how to tell someone they’ve hurt you. It can be harder still to share something so vulnerable while also ensuring your partner doesn’t get defensive.

Dr. Danielle Forshee, Psy.D, LCSW, explains that if telling someone they’ve hurt you without getting accusatory feels daunting, that’s normal. “We want to be careful not shame to the other person, because that's going to make it worse. But it’s hard, and we all mess up. We're human after all,” she tells Bustle.

But your fears about your partner, friend, or family member’s reaction shouldn’t stand in the way of expressing your concerns. When it comes to those difficult conversations, Dr. Forshee explains how to prepare, what to consider, and what to say to someone who has hurt you deeply.

When you’re sitting with uncomfortable feelings it might be tempting blurt something out right after an argument, but Dr. Forshee suggests taking a step back first. “Organize your thoughts outside of the heat of the moment, when you are in your rational mind,” she explains. Essentially, your mind will be calmer and better able to process your feelings with a little space. “Take some time to really reflect on what you're most upset about and why,” Forshee adds. Some people may also find it helpful to write down key thoughts and feelings in advance of telling someone they’ve hurt you.

You might know exactly why you feel hurt, or it may feel really confusing. Forshee recommends investigating those feelings. “It could simply be something from our past that’s been triggered on a subconscious level and we're not so in tune with it, like something that happened to us that we put away and compartmentalized. That's where people need to consider looking into what this situation reminds you of. Is this something that I've been sensitive to for a period of time because of something that happened to me in life?” These types of probing questions can help you further articulate your thoughts.

2. Give Them a Heads Up Before You Talk

Forshee explains that it’s impossible to predict what kind of baggage someone might be bringing with them in any particular moment. Maybe they’ve had an awful day at work, or maybe they’re stressed about an upcoming doctor’s visit. As a result, launching into a potentially fraught conversation without getting a sense of someone’s mood first might not set you up for the most productive conversation. Some couples or friends might be very detail-oriented and want to sit down at a specific place or time, but there’s no need to be that structured unless it suits you. Forshee suggests throwing it out there by asking something like, “I’d like to talk about last night. Where are you with things? Are you ready to talk? I am, so just let me know.” That way, they have the space to alert you if they’re not in the right headspace for an in-depth conversation.

Timing really does matter. “I would definitely suggest that you talk a time where there's nothing imminently pending that either you have to do for the rest of that day or night, because you don't want your brain to be focused on another task that's pending. You need to be completely focused and actively listening to the conversation,” Forshee explains. Similarly, she adds phones should be put away, kids should be babysat or put to bed for the night, and you should be side by side or across from each other so you can see each other. Some people may want to get out of the house to a more neutral location; a walk in the park or a visit to a restaurant would be other good options. If you’re in a public, however, keep yourself accountable and in check to avoid distraction, Forshee adds.

If you’re looking for advice on how to start the conversation, Forshee points out three distinct parts of your statement to hone in on. First, objectively summarize the situation that hurt you. Then, identify the feeling it triggered in you. Finally, explain your thoughts about the feeling. So for example, you might try, “Yesterday, you gave me a lot of unsolicited advice about a problem I’m having at work. I felt really hurt and attacked by that, because it made me feel like the problem was all my fault and I brought it on myself.” When all else fails, Forshee boils it down to explaining, “This is what happened. This is how I felt about it. These are my thoughts on it.”

From there, you can then share with them what you need instead, like, “I’d feel really supported if you simply listen to me when I’m upset, and wait for me to ask before offering advice.”

While it might be tempting to go over the nitty gritty of a fight that set you off, try and keep that part of the talk brief and reflect on your thoughts and feelings instead. “If we talk about what we believe our partner's thoughts, feelings, or intentions were, that creates defensiveness,” Forshee explains. It’s natural that someone could get annoyed in a conversation if they believe you’re mischaracterizing their intentions.

“We can always fight about the things that happened, and it's a losing battle. In that case, it is the both of you against each other. Whereas when we're talking about the emotional part that was meaningful and keeping that connection, it's us against the problem,” she adds.

6. Don’t Be Afraid To Take A Break

When you’re telling someone they’ve hurt you, tensions might be high. And even if you’ve followed these strategies perfectly, you might notice that you’re becoming agitated, or the other party is getting defensive. In these moments, Forshee notes that it’s important to be accountable for your own behavior. It might be wise to suggest taking a break for a half hour and returning to talk later when you’ve cooled down. And if you’re struggling to find the words, steal one of Forshee’s quotes: “I feel like we'd be better off having a conversation at another time when we're both in a calmer place.”

When someone has hurt you deeply, diving into an old wound and figuring out what to say can be just as painful. But with a little preparation and the right environment, you’ll be able to express your thoughts clearly and hopefully reach a resolution.

More like this
So, How Soon Is Too Soon To Move In Together?
By Jessica Estrada
8 Flirty Games To Play Over Text With Your Crush
By Lexi Inks
Passive Aggressive Examples To Look Out For In A Partner
By Jessica Estrada
35 Sexy Texts To Send Your Partner
By Griffin Wynne and Carolyn Steber
Get Even More From Bustle — Sign Up For The Newsletter

This article was originally published on Dec. 31, 2015