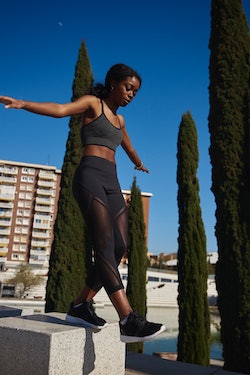 If running a marathon doesn't sound like your jam, you might want to consider walking a marathon, a trend that became popular on TiKTok during quarantine. Videos are characterized by vlog-like check-ins over the course of a very slow, 26.2-mile journey. On average, these walks take about 10 hours or more, depending on how many snack, bathroom, and stretch breaks you take on the way. Videos with hashtags like #iwalkedamarathon and #marathonwalk now have over millions of views.

Lindsay Stevens, 25, one of the first users to post a walking marathon on the app, tells Bustle that she felt inspired by how people were using their free time in quarantine. On a walk with her sister, the idea of walking a marathon came up and they decided to commit to it, despite feeling entirely unprepared. "We wanted to do something memorable and rewarding to overshadow the eeriness of quarantine," she says.

Feeling inspired? Here's everything you need to know about hitting the pavement from some of TikTok's most viral marathon walkers.

Start Prepping Ahead Of Time

First, establish that you have no injuries or medical issues that make extreme fitness challenges dangerous. You might need to check in with your doctor if you're unsure. Despite it being walking challenge, it's still incredibly taxing on the whole body. Spoiler alert: athletes of all ability levels were left very sore and exhausted by the challenge.

You'll want to start getting hydrated a few days before the big trek. Jenna Baker, 26, learned this lesson the hard way. "We had brutal headaches the day after the walk and other people told us we probably needed to hydrate way more ahead of time to be more prepared." Stevens drank water infused with electrolytes to ensure her body was as hydrated as possible going into it.

You'll also want to make sure that you have a sturdy pair of walking or hiking shoes that are made to withstand miles and miles of pavement contact. "I made the mistake of wearing running shoes, which I have since learned are different from walking shoes for a reason," Stevens says. "Walking shoes support your feet better for the pounding they get when you're walking, and wearing the wrong shoes can cause pain and complications," she adds.

Map Out A Route & Make A Plan

Before you leave, have a trail mapped out that includes access to water, restrooms, rest stops, and snacks. For a walk this long, you'll want to journey along public paths and sidewalks so you're never too far from a resource you need. You'll also want to plan out timing, while keeping the weather in mind. "The morning of the walk, we left our house around 5:30 a.m. because it was supposed to be over 100 degrees in San Diego that day and we wanted to beat the heat," Steven says.

For Kelli Peterson, 18, who made a solo trek, coordinating with someone at home was a crucial part of the plan. "My dad kept in contact with me the whole time and was able to see my progress, as I was going solo," she says, citing safety as a motivator.

You might also want to plan breaks with friends and family along the way if possible to keep your momentum up. "We met my family and roommate for lunch, we stopped by their mom's house, my boyfriend's parents house and another friend's house to rest, visit, and take bathroom breaks along the way, which made it even more enjoyable," Baker says.

After slathering yourself in sunscreen, you'll need to pack water and snacks, even if you plan on stopping. Keep your bag light enough that it doesn't hold you back. "I'd recommend keeping blister BandAids and a few extra pairs of non-cotton socks handy," Stevens says. "Cotton socks aren't moisture-wicking, so you need athletic socks that are going to wick away moisture so painful blisters don't form halfway through your walk," she explains.

Baker packed some iced wash cloths to keep her cool during the hottest hours of the day, which didn't take up much space, but other items, like layers of clothing, became cumbersome as in the height of the walk. Because she had planned out a visit with her family on her route, she was able to drop off items she no longer needed. "Once I got rid of some of the things I didn't need in my bag, I was much happier with the weight of things I was carrying," she says.

People who have completed the marathon walk generally say they have no regrets, but are quick to admit that it was hell getting there. "The beginning was pretty easy and we had adrenaline to sustain us, but around mile 11 (five hours of walking), our feet began to hurt," Stevens says. She adds that her pre-existing achilles tendinitis flared up at that point, too. For Baker and her crew, hip joints, knees, and sciatic nerves were feeling the burn. "We were definitely very tired and very much hurting," she adds.

The final stretch is just as magical as you'd think. "I honestly expected to be more mentally exhausted at the end of the walk since it took us 12 hours to complete, but we were super energized mentally, and just completely wiped out physically," Stevens says. "We pretty much limped to the finish line with huge smiles on our faces and very tired, sore feet." Though she considered giving up at points, she mustered motivation from "good music" and "cheers from friends and family."

For Peterson, the experience was more thrilling than excruciating. "I generally thought it was going to be more tiring and difficult but I had quite a bit of energy and was able to endure the hot weather throughout the walk," she says.

Anticipate A Day Off Your Feet

"I did not anticipate having any injuries afterwards, but I had to get some physical therapy on my achilles," Stevens says, maintaining that it was still worth it. "When the physical therapist asked how I injured my achilles and I told her I walked 26.2 miles, it was hilarious to see her confused reaction," she says. Baker was also surprised by how many aches and pains were present the next morning.

Blisters, joint pain, tendon inflammation, and dehydration aside, these marathoners recommend the challenge. "I don't know that I necessarily need to do it again but if someone else wanted to check the accomplishment off their bucket list, I would definitely encourage them," Baker says. "[T]hey are more than able to push through and make it happen."