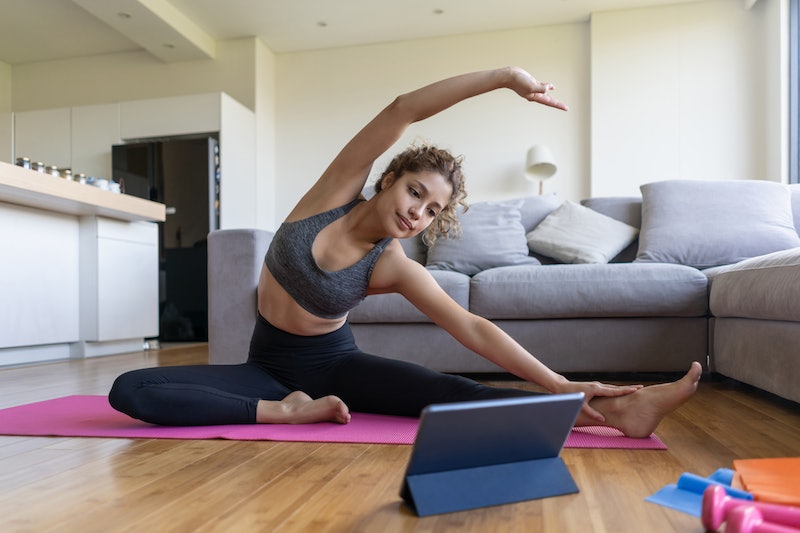 You turn to yoga to soothe your frayed nerves, but sometimes you sink into lizard pose and your heart starts racing. You're trying to ground yourself and be present in your body, but a swarm of heavy emotions makes you want to pull out of the pose and never return. If you think you're the only one who's so bad at yoga that it freaks you out sometimes, rest assured that it's super common ⁠— certain yoga poses can trigger strong emotions for lots of people.

"It isn’t unusual to go into a yoga class feeling fine only to be hit with a wave of unexpected emotion," says Kathryn Budig, a yoga instructor for the online yoga platform Glo. "I’ve seen people move through it — letting their tears mix with their sweat — while others have cried quietly or even excused themselves from the room. It’s all completely natural even though it may be unexpected."

How Yoga Affects Your Emotions

Maybe your discomfort from stretching your hips during pigeon pose elicits an intense emotional response, or ending your practice by lying down on your back might activate your water works. Those surges of feels make complete sense, says Kelly Clifton Turner, a yoga instructor and the director of education for national yoga chain YogaSix. "Hip openers such as pigeon can be intense while in a prone position, which allows great introspection and release," she tells Bustle. "Other poses from the 'heart-openers' or backbends such as camel can also bring people to tears. Savasana is also a pose that a lot of people break down in." Sure, you're "just" lying on your back, but Clifton Turner says you're not the only one who's got a tough time dealing with the release.

Yoga is a practice that's supposed to calm you down, so it's fair to ask what gives. Getting so emotional might actually be the key to making your session worth your while. "It’s been theorized that unprocessed emotion and fear stores itself in the pelvic region and the surrounding muscles," Budig explains. "As one releases physical tension in their hips, it isn’t surprising that emotional tension may want to escape as well. It’s an opportunity to drop out of daily distractions and into your body, which often means coming face-to-face with avoided or non-excavated feelings."

You're doing it right when you're letting yourself get vulnerable, Clifton Turner tells Bustle. When you're pushing your hips up and chest open during an intense backbend, for example, it's all about exposing yourself. "It draws from the deep vulnerability and bravery asked of baring your heart and throat, not knowing what's behind you," Clifton Turner says. Even with savasana, you're opening yourself up to stillness — which is especially difficult in such a "go go go" world.

How Do You Deal With Intense Emotions In Yoga?

It's hard to figure out whether you should drop out of camel pose or breathe through it until the end. When such intense feelings are catching up with you, do you stick it out or let yourself rest? "Sitting in discomfort can lead to break downs and breakthroughs," Clifton Turner says. "Am I moving out of the pose because I'm afraid or unwilling to doing the work, or because I'm putting myself at risk? I can usually tell the difference. It's also OK to not be up for diving into the emotion on a particular day. That's yoga too — choosing how to skillfully engage with the world and responsibilities that surround you."

In moments that you feel up to it, Budig suggets letting your feelings run their course. "Give your emotions permission to live," she says. "It might not be easy or pretty, but a yoga room should be a safe space to process and heal." When your discomfort is primarily physical, definitely listen for the modification cues that most instructors offer throughout class. But when you suspect that your response to the pose is mostly emotional, experiment with sticking with it for a while. "If the uneasiness is coming from a mental or spiritual place, stay in the pose as long as you trust your teacher and the space you’re in," she suggests. "It’s always OK to ask for support or help if you feel overwhelmed." When you're practicing at home, that might mean having a friend on standby to text after your session, just like you might after a tough talk with your therapist.

Even if you're not catching extra feels in the deepest of poses, though, you're not "doing it wrong." Clifton Turner says that everyone stores emotions differently in their bodies, so it's alright if something that gets one person crying doesn't punch you in the face. Regardless of what you're feeling or not feeling, she says, remember to do what you should always be doing in yoga anyway — remind yourself, always, to breathe.