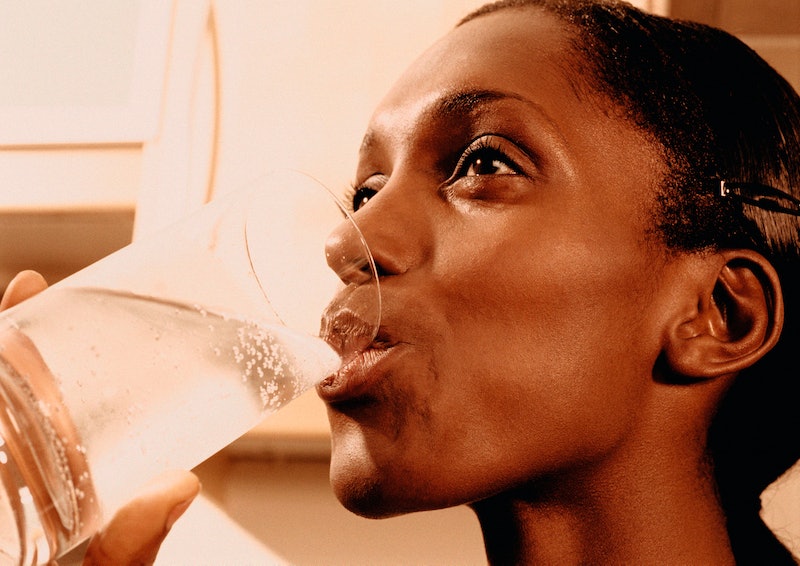 If you're like me, your biggest daily requirement is an extra bubbly gallon or two of seltzer. Technically, sparkling water, club soda, and seltzer — all part of the carbonated water family — have their different levels of fizz, but chances are that if you love your water with a side of CO2, you'll take what you can get. When all you're drinking is the good stuff, this summer's heat waves might have you asking whether sparkling water really is hydrating.

What Even Is Carbonated Water?

You might wonder what actually happens in your Soda Stream when you transform calm water into spicy water. To put it simply, pressure plus carbon dioxide infuses your regular water with the bubbles that make seltzer so exciting to drink. If you want to get fancy about the differences between carbonated waters like Pellegrino sparkling water, Schweppes club soda, and the plain old seltzer you make at home, it has to do with the mineral content.

Seltzer is straight up water and carbon dioxide, without any mineral fuss. Sparkling water is from wells or natural springs, increasing its mineral content — sometimes, not all that much carbonation is even added, giving these drinks a softer fizz. Club soda is the stuff you ask the bartender to give you, because it has potassium bicarbonate and potassium sulfate in it that makes it taste slightly saltier. The common bubble running through all these drinks is their carbonation. It might tickle on the way down, but does that mean it's as good as plain old H2O?

According to Dr. Natasha Bhuyan, M.D., a provider and regional medical director for One Medical, sparkling water is just as hydrating as regular or still water. But because of the added carbon dioxide, your body absorbs the drinks in slightly different ways. "Regular (still) water gets absorbed by the body faster than carbonated water," Dr. Bhuyan tells Bustle.

Fortunately for your hydration needs (though maybe not for your tendency to burp), the gas that gives seltzer its pop separates from the actual water when it gets into your belly. According to a 2015 study published in The American Journal of Clinical Nutrition, the level of a drink's carbonation doesn't impact how much it hydrates you. So, to the joy of seltzer drinkers everywhere, you get the same hydration benefits drinking sparkling water as you do with the non-fizzy stuff.

How Much Seltzer Can You Drink?

I am definitely that guy who downs seltzer all day like nobody's business, but if you're not a fan, just make sure you keep drinking your preferred water. Either way, as long as you're drinking your eight glasses a day, Dr. Bhuyan says you should be good to go. "Some people might feel more full on sparkling water," she tells Bustle. "So, they may actually drink less water overall. On the other hand, some find sparkling water more appealing, so they would be likely to keep drinking it and stay hydrated throughout the day."

Finding a hydration pattern that works for you can also depend on your activity level. "Athletes who are losing electrolytes benefit more from an electrolyte-based drink, which includes sodium and minerals," Dr. Bhuyan says. In that case, club soda and sparkling water might be a smart choice. "However, that is also often not sufficient for athletes, as they need to consume a higher amount, which is harder to achieve with the carbonation." If you feel too full up on bubbles when you're seltzing, try a coconut water, Gatorade, or other electrolyte-rich beveragino.

Even if you're not an athlete, the same principle goes for you when you're sweating your way through summer. If that full feeling you get from carbonated drinks prevents you from downing enough H2O every day, try swapping in some still water as well.

Drinking club soda on its own is one thing, but adding it to your cocktails or grabbing a can of hard seltzer will probably mess with your hydration game. "When people consume alcoholic beverages, we find they are overall dehydrating," Dr. Bhuyan says. "So even with a mixed drink containing seltzer water plus alcohol, it’s important to drink water in between." It's sort of like coffee — yes, it has water in it, but no, it's not going to count toward your hydration needs. Having plain seltzer or water in between your spiked adventures will keep you steadier on your toes.

Maughan, R.J. (2015) A randomized trial to assess the potential of different beverages to affect hydration status: development of a beverage hydration index. The American Journal of Clinical Nutrition, https://academic.oup.com/ajcn/article/103/3/717/4564598.