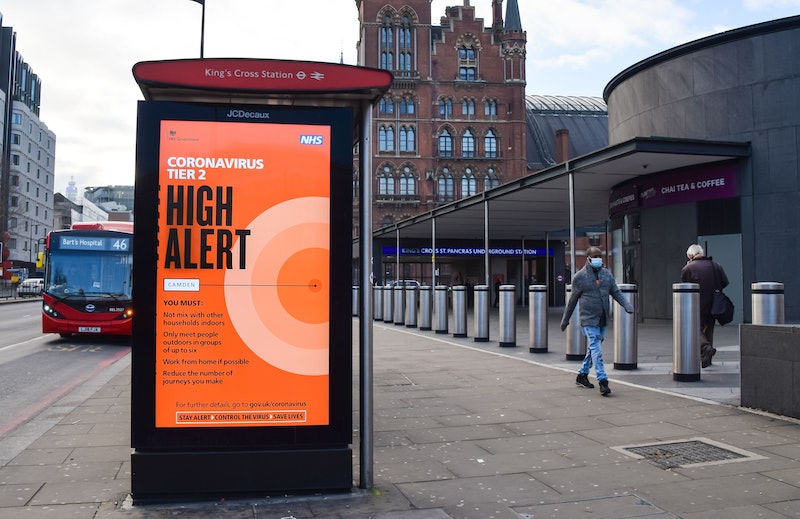 On Dec. 15, Health Secretary Matt Hancock told the House of Commons that a new variant of COVID-19 had been identified in the UK. He said the new strain is spreading faster and could be behind the "very sharp, exponential rises" in cases across the South East. On Dec. 19 London and the South East entered a tier four lockdown, due to fears over how fast this new strain is spreading. The idea of a faster-spreading new mutation is obviously unnerving, so, for those looking for more information, here’s what we know about the new COVID-19 strain so far.

The new strain of COVID-19 was first found in Kent in September. It’s since been identified in 60 local authority areas, mostly in the south of England. In response to this strain, more than 40 countries have imposed travel bans from UK arrivals and France has closed its border entirely for 48 hours. But as of Dec. 22, Denmark, Italy, Gibraltar, the Netherlands, and Australia have confirmed the strain is now present in their countries. While not yet confirmed, it’s possible that this is also the case for France and South Africa.

However scientists have urged caution, emphasising that mutations in viruses are normal and expected, and that more research is needed to establish how much of a risk is posed by the new strain. Professor Alan McNally, a specialist from the University of Birmingham, told the BBC: "It doesn't mean it's more transmissible or more infectious or dangerous. It is something to keep an eye on. It is important to keep a calm and rational perspective on the strain as this is normal virus evolution and we expect new variants to come and go and emerge over time."

Analysis of the new strain has been shared and researchers believe there could be 17 key differences. There have been changes to the spike proteins. These proteins are the key that the virus uses to enter the body’s cells. Any adaptations that make it easier for COVID-19 to penetrate the cells may make the strain more dangerous and the cures less effective. But is that what's happening right now?

The short answer is, we don't know yet. When Boris Johnson revealed new plans for the festive period on Dec. 19 he said that the new strain of the virus could be 70% more transmissible and may increase the R number by 0.4%. This means that the new strain could pose more serious risks as it spreads quicker. The BBC reported that these statistics also appeared in a presentation by Dr. Erik Volz, from Imperial College London, on Dec. 18. Dr. Volz said, “It is really too early to tell… but from what we see so far it is growing very quickly, it is growing faster than [a previous variant] ever grew, but it is important to keep an eye on this."

Since it was first identified scientists have been looking into how the virus has mutated and how widespread it is. While a mutating virus sounds terrifying, viruses change and mutate by nature, so it’s by no means unexpected. More research needs to be done to establish whether the new strain may have different symptoms, be more severe, or last longer.

Some experts are also concerned that this strain could infect children more easily. “There is a hint that it has a higher propensity to infect children [...] we haven’t established any sort of causality on that, but we can see that in the data” Professor Neil Ferguson from Imperial College London, said during a Q&A on Monday. “What we’ve seen over the course of a five or six-week period is consistently the proportion of pillar two cases for the variant in under-15s was statistically significantly higher than the non-variant virus.” Professor Wendy Barclay added that they are “not saying that this is a virus which specifically attacks children,” but that as the initial virus “was not as efficient in infecting children as it was in adults.” In short, the new strain is “less inhibited, if you like, to get into children,” she said.

Scientists have also noted that the pace at which the virus mutated could be worrying. The BBC reported that while the new strain was detected in September, around a quarter of cases of COVID-19 in London by November were the new mutation. By mid-December this rose to almost two-thirds.

The COVID-19 Genomics UK (Cog-UK) consortium were the first researchers to identify the mutation and will be keeping a close eye on it. Speaking to the BBC, Professor Nick Loman from Cog-UK said, “It has a surprisingly large number of mutations, more than we would expect, and a few look interesting.”

The Guardian reported that the new strain was detected in a patient in Cambridge with a weakened immune system. They were treated with blood plasma taken from a recovered COVID-19 patient that contained antibodies. The virus mutated during the treatment and became resistant to the antibodies.

Ravi Gupta, professor of clinical microbiology at the Cambridge Institute of Therapeutic Immunology and Infectious Disease, told The Guardian, “We need to crack down on it [the new stain]. We don’t know what it’s going to do long term but we can’t take a chance on it. It’s unlikely it’ll make people sicker, but it could make it harder to control.”

What does it mean for the vaccine?

Hancock and researchers have said that they don’t think that the new strain of COVID-19 will threaten how effective the developed vaccines are. Both the Pfiezer and Oxford vaccine train the body to attack multiple parts of the spike protein so they could still work against new strains of the virus.

Speaking to the Guardian, the Executive Director of the World Health Organization (WHO) Emergencies Programme, Dr Michael Ryan, said, “This kind of evolution and mutations are actually quite common. The question ... is: does this make the virus more serious? Does it allow the virus to transmit more easily? Does it in any way interfere with diagnostics? Would it in any way interfere with vaccine effectiveness? None of these questions are addressed yet.”

More like this
Will Archie & Lilibet Attend The Queen's Funeral?
By Sam Ramsden
The Queen’s Cause Of Death May Not Be Formally Announced
By Shahed Ezaydi and Catharina Cheung
Chris Kaba's Family Continue Fight For Justice After Viewing Police Bodycam Footage
By Sophie McEvoy
Women Around The World Are Cutting Their Hair In Solidarity With Mahsa Amini
By Darshita Goyal
Get The Very Best Of Bustle/UK