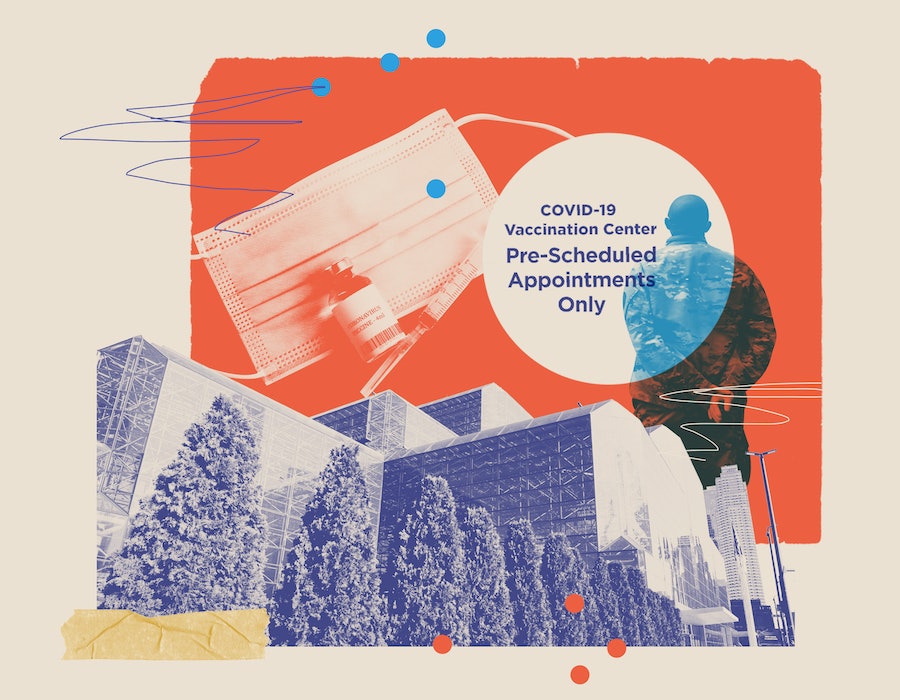 Who could love the Javits Center? That sterile, corporate-conference vibe, the crowds moving like slugs, the calendar of car shows, art shows, beauty expos, retail expos, expos, expos, expos. Every city has a Javits Center. Think the World Congress Center in Atlanta; McCormick Place in Chicago; the I-X Center in Cleveland. New York's is a big blob of a building near the Lincoln Tunnel, and it’s somehow far away from everything. (It is a law of New York physics that you can’t get to the Javits Center in less than 45 minutes, even if you’re just a few blocks away.) The last time I was at the Javits Center was Jan. 26, 2020. I’d taken my 4-year-old to the American Kennel Club’s Meet the Breeds dog show — he was in the midst of a puppy obsession, and so I begrudgingly paid $50 for tickets and we schlepped from the Upper East Side down to 11th Avenue on a cold Sunday morning. The event was packed, and I remember lifting my son up, pressing against other parents, everyone breathing on everyone, so he could get a better view of a beautiful, enormous Alaskan Malamute. That week, a COVID case had been found in Washington state, the first in the United States, but NYC was still COVID-free (ha). I’d brought hand sanitizer and we used it a few times, not understanding that sanitizer was no match for a likely super-spreader event.

A little more than a year later, I entered the Javits Center again, same winter sun reflecting through the glass ceiling, different universe entirely. I’d taken an Uber there, double-masked this time, and when I’d gotten in the car, the driver had shyly asked if I was going for the vaccine. I was, I told him, quickly explaining that I had chronic high blood pressure — a doctor’s note! — as if he was going to assume I was some granny impersonating-vaccine-line-cutting impostor. He’d only wanted to know how I’d gotten the appointment. He was also eligible, he said, but couldn’t find any open spots online. He was trying every day. I told him that I’d known when to start refreshing, refreshing, refreshing because I followed a bunch of vaccine bots on Twitter. Vaccine bots on Twitter! I cringed at this new language we'd all learned.

I was directed into a room filled with plexiglass-separated desks and escorted to one manned by a middle-aged woman with purple nails.

As he drove, I counted the stores and restaurants in my neighborhood that had shut permanently, so many, too many, my nail place, my pizza place, my favorite bodega, my pharmacy. Who knew you could mourn a Duane Reade? He took a route through midtown and I realized I hadn’t been down there all year. The emptiness was shocking. There was no one — no one — in the 42nd Street Times Square station. For years, I’d arrived there every morning for work, the most crowded corner of New York City tourist hell. Now the sparkly "subway" sign hung limply, beckoning cheerfully to no one.

Forty-five minutes later, we arrived at the Javits Center. (At least some things never change.) My driver wished me good luck, and I told him I hoped he could get an appointment soon, and that this whole process was way too difficult to navigate. “De Blasio,” he said wearily, invoking the universal New York goodbye.

The entrance was clearly marked and I went in fearing chaos. I imagined the typical Javits Center crush. But the giant hall was nearly empty, just a few soldiers working the door. They checked my registration and told me to follow the yellow arrows toward the back. A soothing female voice pipped over the speakers, instructing me to visit the information desk if I had questions and assuring me that the Javits Center had “installed special air filters to reduce pollutants and implemented a comprehensive cleaning program.” She sounded like Scarlett Johansson in Her, and come to think of it, the whole place had a trippy Spike Jonze energy about it. I’d entered the future, I thought, as I walked farther inside, arriving at another checkpoint. I was directed into a room filled with plexiglass-separated desks and escorted to one manned by a middle-aged woman with purple nails. She asked for my ID and digital paperwork and then handed me an information pamphlet about the Pfizer vaccine.

“This is crazy,” I said to her. I couldn’t help it. It was crazy. “It’s like out of dystopian movie.”

I followed more yellow arrows until I reached another soldier. They were all so young and cute and nice. “This way, ma’am,” he said, escorting me into a different room, this one dotted with tables at which people were getting vaccinated, arms outstretched as the needles popped in. For a moment I was overwhelmed by the kindness of the soldier, the efficiency of the process, the goodwill of the people running the show, the trust of all those naked arms. I felt my eyes fill with tears. What a long, terrible year it had been. This place had gone from soulless conference center to working field hospital to a mass vaccination site, part of the endgame at last. And then I was crying in the Javits Center. The godd*mn Javits Center.

On the way out, there was a “wall of thanks” on which people had left notes on index cards about their vaccine experience. I knew I should read them or maybe even leave one, but I had the familiar Javits Center urge to flee.

I was seated at a station and a no-nonsense nurse was the first one to ask about an underlying condition. I told her about my hypertension, expecting a follow-up, prepared to show my medical chart, but she just carried on. I made a dumb joke about how my blood pressure must be through the roof, and she nodded politely and told me about the potential side effects of the shot. I asked if she’d seen anyone who’d had an allergic reaction. “Yes,” she said, and left it at that. Before I had a minute to worry she asked me to bare my arm, which I did, and then it was done. Easy. “Thank you so much,” I said. “See you in three weeks,” she replied.

More yellow arrows, another open area, this time for the required 15-minute medical observation. Chairs 6 feet apart were occupied by the newly immunized, all scrolling through their phones. I sat down and texted everyone I knew. “I’m vaccinated!” “It’s done!” No one was as excited as I was, based on the limited replies. “Jealous,” wrote a friend. “Line-cutter,” wrote another. I kept licking my lips under my mask. Were they tingling? Was my face feeling weird? Another soldier was doing a mini standup act for the crowd, reminding everyone to take a picture of their vaccine card in case they lost it. “Is everyone feeling good, good, good?” he asked. We were all fine.

My 15 minutes up, I was free to go. On the way out there was a “wall of thanks” on which people had left notes on index cards about their vaccine experience. I knew I should read them or maybe even leave one, but I had the familiar Javits Center urge to flee, to get out of this suburban outbreak movie and back into the real New York. Outside it was bright and chilled, and I jumped into the first taxi I saw. About 10 years ago, I’d attended a comic-con-like show at Javits at which all the women were dressed as sexy space warriors. I’d been to a boat show knowing full well that I’d never in my life buy a boat. I once went to a jiu-jitsu exhibition there to watch a then-boyfriend compete (that one smelled particularly bad). And now I’d been vaccinated for COVID-19 at the Javits Center. I watched the great hulking structure fade as we drove away, knowing, for once, I’d happily greet it again in 21 days.