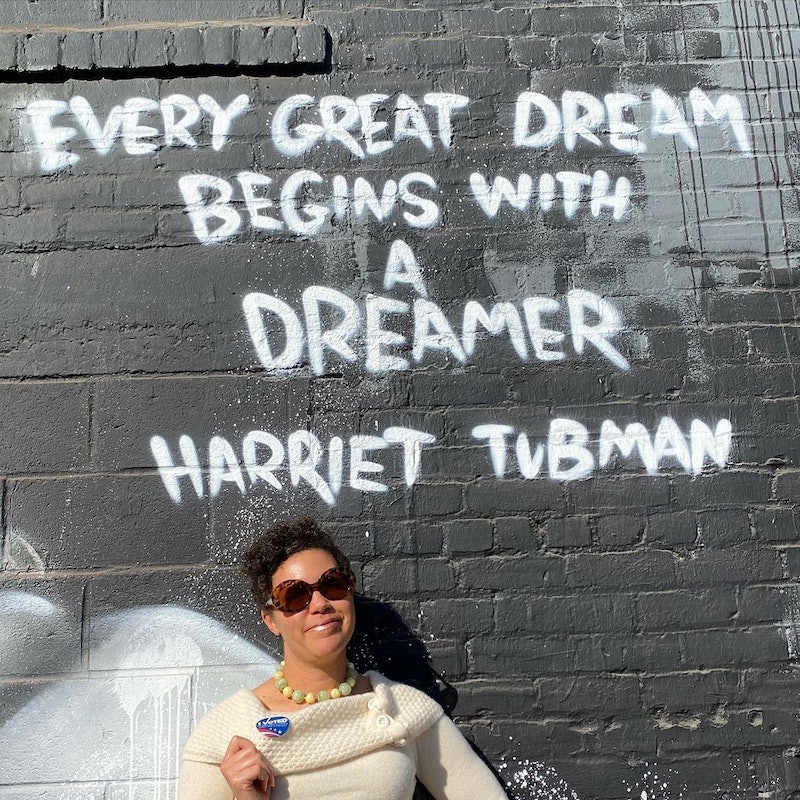 California-based dietitian and activist Jessica Wilson, @jessicawilson.msrd, had a pretty standard Instagram presence until mid-2020: her professional account published content challenging eating disorder treatment standards and educating followers about what trauma-informed practices, particularly for communities of color, could look like. Following the summer’s Black Lives Matter protests, however, she became a major social media force in the conversation about Black bodies and Black lives and is now writing a book about the impacts of white supremacy on the body narratives of Black women. Six months later, she reflects on how quickly gaining a large Instagram following has impacted her mental health and work.

Around fall 2019, I noticed I followed a lot of body positive dietitians on my personal Instagram, and that there weren’t a lot of marginalized folks in that space. I saw a lot of narratives focused on people with privilege, in terms of getting access to treatment, and less about trauma. So I started a professional account in order to bring a trauma-informed approach to eating disorders, as opposed to a privileged, diet culture-focused one. I think I had about five followers that first day.

From the beginning, I posted about things like divesting from diet culture and how conversations about nutrition often fail to be anti-racist. But following George Floyd’s killing, licensed mental health therapist and activist Alicia McCullough and I challenged our followers to #AmplifyMelanatedVoices. We were seeing a lot of people talking about social justice and police violence, and particularly people who weren’t represented in that violence. We asked them to mute themselves and to center Black and brown folks in the conversation instead. After my first post about it, my professional Instagram went from having about 10,000 followers to about 100,000 followers in two days.

Since my Instagram exploded, I haven’t really taken a moment to reflect on the change. My friends started calling me an influencer, but I can’t say that’s how I’d define myself. I think of that as people with big followings on TikTok or YouTube. I am still adjusting to the positive attention. I put more thought into my posts than previously, and look for clarity to reduce misinterpretation of my words. I work just as hard to interact with my followers as I did when I had a handful. I try to respond to each comment, which then makes it difficult to post as regularly, just because of time. If I post something that inspires critical thinking, something that challenges the ways people have conceptualized body liberation — like my post about Lizzo in December — I can engage with followers in the comments and DMs for over an hour each time. The time spent writing the post can vary from five minutes to 30 minutes, depending on the need for clarity and accessible language.

In terms of the DMs and comments I get now, I’ve noticed the number of white clinicians, therapists, and dietitians who have reached out to me, wanting to learn more or who asking me to be on panels, has increased. I’ve also seen a lot of Black women in my DMs, saying they've never seen themselves represented in this conversation before — that makes all the time I spend on posts worth it. When I tell my friends that I'm surprised at the following, they remind me how hard I have worked for years to center Black women in national conversations about body liberation. I had a post where I said that disordered eating is a natural response to trauma, which is why it’s more prevalent in Black and brown communities. That one really struck a chord — I could see it in the amount of likes, comments, and DMs I got. The attention has been validating.

In 2020, I felt pressure to post, but beginning in 2021, I decided to give myself a break — in part to start writing a book, and in part to be able to detach from my phone. I do take breaks from social media in order to mentally reset. I try to not open up Instagram for days at a time. Sometimes I take weeks off from posting on Instagram, which is unfortunate for the algorithm, but in terms of self-care, turning off my phone and not looking at screens for a few days is the best way to cope. And going back to my Black friends who I actually know in person and not on Instagram can remind me that I am a human being outside of social media. Those grounding opportunities are definitely key to continuing in this work.

For Black women especially, when our content and our words are challenging people, there is a lot of engagement on social media. But when we’re sharing Black joy, there is less engagement. I've reduced the photos of my personal life and Black joy on Instagram because the algorithm prioritizes engagement. The fewer shares, comments, saves these posts get, the further they become buried in follower's feeds. Since they aren't seen, I’ve mostly limited my Black joy posts to my private account.

It goes back to the idea that “Black women are here to teach me.” Where’s the space for Black joy in these conversations about body liberation? How can we celebrate that as much as the labor Black women are doing? There are people behind this content and this labor, but when folks just value Black women for their labor, there is so much that’s missed.