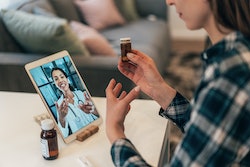 Getting to the age where all your friends are having kids can be disorienting. For Kate Ryder, watching those same friends go through miscarriages, complicated pregnancies, or difficult labor and delivery was another kind of trip.

“I was hearing stories from my friends that were kind of shocking, about the lack of support they had for [postpartum depression, lactation, and fertility treatments],” Ryder tells Bustle. “There's so many different journeys that people go on to have their kids and so many things that happened along their way — it just felt that there was not enough support for women.”

The 38-year-old was working in venture capital at the time, where she regularly promoted the development of apps and new technologies. She realized that she had the ability to build a virtual care platform that solved the issue she was seeing. But the early stages of getting funding were “rough,” Ryder says: beyond the fact that only 2.3% of venture-backed startups are women-led, she had to “try really hard to prove why virtual care works” long before people knew first-hand that it did.

Today, that platform is Maven Clinic, launched in 2014, a women- and family-focused virtual health network with over 2,000 providers, according to Ryder. Women can log on and quickly make specialist appointments for anything from family planning to physical therapy. With backing from people like Mindy Kaling, Reese Witherspoon, and Natalie Portman, the platform proved to the male-dominated venture capital industry that women’s telehealth care is a solid investment. Now that the pandemic normalized seeing a doctor through a screen, Ryder is gearing up for another round of funding that, for the first time in her career, isn't going to be a hard sell.

Here, Ryder tells Bustle about flourishing during a disaster, how she gets her day-to-day done, and the advice that changed her approach to work.

The Maven model seems pandemic-proof, but I’m curious what challenges came up.

Consumers understand telemedicine now because they had to rely on it during the pandemic. So we don't need to try to describe why virtual care works. The provider community has embraced telemedicine in a way that they hadn't before. We’re seeing a ton of demand for our product. [A spokesperson for Maven confirmed that telehealth appointments on the app increased by 50% in the early months of COVID, and areas like mental health saw a 300% increase.]

The overwhelming challenges were more internal. As a company, we're experiencing all this growth — we hired 90 people last year, and we're hiring another 100 people this year— and we had to work remotely. Zoom culture only goes so far. We’re looking forward to getting back to the office.

What was it like running a virtual platform, virtually, for over a year?

I don’t even remember. I was blacked out. Things were moving so fast because we were growing so quickly as a business.

Personally, I’ve been pretty lucky. My husband, three kids, and I moved out to Connecticut to be with my parents, who took care of our kids. I didn't have any childcare disruption. My laptop was wherever I was. My husband and I were kind of playing musical chairs a little bit and dodging our children as they woke up from naps, and that was definitely rough. I’m glad to be back in Brooklyn now, with childcare and a proper “office.”

You had to convince people that telehealth was going to be a big deal long before it was. I imagine that felt like an uphill battle. Did anyone ever give you terrible advice along the way?

In the early days, when it was really hard to fundraise with Maven and there were moments where it looked like we weren't going to make it, people just told me to quit. They were like, “Gosh, this just seems too hard.” That’s pretty bad advice — of course it’s going to be hard.

Was there any great advice that stuck with you from that time period?

When I was starting Maven, someone said to me, “Whatever business you start is going to have a ton of ups and downs, but you’re going to do it for longer than you think. You really, really have to care about the problem you're solving.” There are so many hard moments when you're building a business where it would be so easy to quit. So you do have to care so much. Or at least, I do.