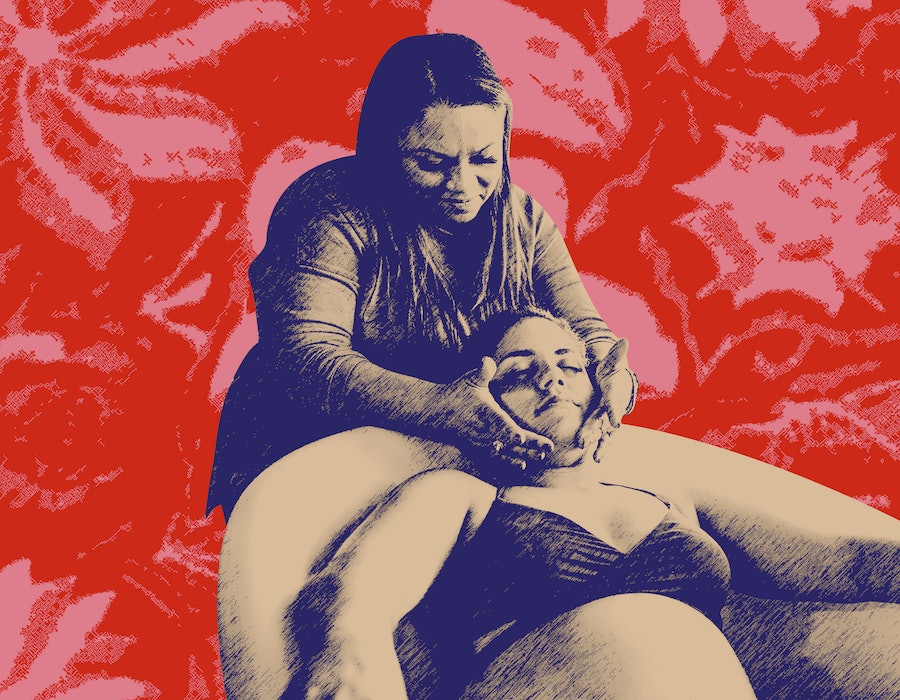 Brenda Amaya describes the birth of her firstborn as traumatic. She went in trusting her nurses and providers would “try their best” to respect her birth plan, she tells Bustle, but had the opposite experience. Even though she had specifically mentioned wanting a medication-free vaginal birth, she remembers being harassed to have an epidural by hospital staff, who urged her to “get it together.”

“Not once did someone offer me to try walking, try focusing on my breathing, try taking a shower, try different positions,” adds Amaya, who was 18 when she was pregnant with her first child. But Amaya describes her second birth, six years later, as healing. The difference, she says, was her doula.

“She held sacred space for me, told me about my options, and supported me through the birth and postpartum,” Amaya tells Bustle. With this pregnancy, she knew right away she wanted birth support to provide “consistent care.” Her doula, a close friend, ensured that she had the comfort and community she needed. Unlike after the birth of her firstborn, Amaya didn’t experience postpartum depression. This experience ultimately led Amaya, who was born in El Salvador and now lives in Virginia, to realize that birth work was her “life’s passion.” She became a doula herself in 2018.

Doulas, meanwhile, are a low-cost intervention shown to help keep parents and babies healthy. Although doulas don’t offer medical care, they help new parents navigate an important life transition by cooking meals, helping with household management tasks, offering emotional support to the new parent, and other kinds of assistance. The American Pregnancy Association reports that doulas help reduce stress and anxiety during pregnancy and labor, which leads to better birth outcomes. They also help prevent birthing people from experiencing “exploitation, exclusion, discrimination, and a loss of autonomy in the medical system,” according to the Center for American Progress. For Latinx people in particular, doulas also offer the culturally sensitive emotional and spiritual support needed to navigate a discriminatory system.

Nilky “Midwife Nili” McKinney, an afro-indigenous birth worker, had a similar experience to Amaya. Lack of patience by providers, she tells Bustle, led her to giving birth via cesarean, which she had wanted to avoid. “Lack of knowledge in terms of self-advocacy made me an ideal target, as well as being a young minority,” she says. She also moved toward birth work to help keep people from having the experiences she did, and now provides services in New York and New Jersey.

Increasing Latinx representation in the birthing community is key to Amaya’s work, too. During her first pregnancy, she didn’t see herself represented in the home birth community, so she thought it wasn’t an option that was available to her. Now, she shares her home birth videos and photos on social media and her professional website to give other Latinx birthing people perspective about their options. She also started a series on Instagram live to share Latinx birth stories, allowing people to share their personal experiences with home birth.

“I wish that I had seen or heard about Latinx people like me who had a home birth experience,” Amaya says. “The only stories that were shared with me were about how painful and uncomfortable birth was going to be.” Now, she connects with people who find her through her photography work who are interested in learning more about self-advocacy during birth — “people like me who relate to my story and are prompted to dig deeper.”

Part of the service doulas can provide is practical protection from bias. A 2018 report found that discrimination from maternity care providers, lack of access to paid maternal leave programs, and poor communication during labor are some of the main causes of negative birth outcomes in the Latinx community. In fact, 10% of the people surveyed who spoke Spanish as their first language reported that they faced discrimination due to their language.

“To be able to receive support in a language you are comfortable with is a dire need for the Latinx community,” Nili says.

Why Ancestral Narratives About Birth Matter

Personal experiences with birth and pregnancy can sometimes be connected to larger cultural narratives and histories. Amaya’s work as a doula, for instance, is informed by a trip she took to El Salvador during her second pregnancy. “I learned more about my ancestors and what their birthing experiences were like,” she says. Her grandmother had given birth to 10 children at home, she learned; knowing that members of her family had been giving birth at home for generations helped Amaya with her own labor and inspired her to help others find strength in those ancestral links.

Supporting and caring for birthing people is a way of continuing on that legacy. “Doulas are a part of our traditional practices surrounding births. There were wise women, parteras, as there were supportive women that assisted the birther throughout the labor and postnatal period,” Nili says. “To not have a doula is to do ourselves a great disservice to our ancestral grandeur and who we were as a community.”

The Barriers To Accessing Doula Care

But even for people who are aware that doula services exist, it can be difficult to find someone they’re comfortable working with throughout pregnancy. Grace Roman, founder of Bronx Doula Services, a non-profit that connects birthing parents with doulas, suggests people ask themselves how involved they want a doula to be in the pregnancy; if it’s important that they’re Latinx, speak Spanish, or both; and, with the pandemic ongoing, whether they will be fully vaccinated against COVID-19. Other considerations might include faith or spiritual needs or if parents want to encapsulate their placenta.

Then there’s financing. Some doulas offer sliding-scale options; rates can start from $400 or exceed $3,000. Some programs, like the New York State Doula Pilot Program, cover the cost of doula services for Medicaid fee-for-service and Medicaid Managed Care enrollees, and other states have introduced legislation for coverage for doula services, too. Women, Infants & Children (WIC) programs can sometimes offer funded or free support for birthing parents.

“It does not matter how you identify, or your race, or your income bracket,” says Roman. “If you’re pregnant, birthing, or experiencing life postpartum, then you deserve culturally competent, person-centered care from all your providers.”

On top of cost and availability, however, there can be cultural barriers — like whether Latinx people feel comfortable seeking out this kind of help at all. “We understand a culture where ‘En boca cerrada no entran moscas,’ or ‘El que merece, no pide,’” says Nili — flies don’t enter a closed mouth, or he who is deserving doesn’t need to ask — but here, “‘El que no habla o pide, no come’” — he who doesn’t speak up, won’t eat. “Resources are available, but we must be open enough and unashamed to seek the support we deserve.”

Amaya echoes Nili’s sentiments but highlights the impact that lack of information and institutional support can have on pregnant and birthing people. “My years as a birthkeeper led me to unravel so many traumatic layers of my hospital birth,” she says. “Things that I now know could have [made my past experiences] so different. The truth is we don't know what we don't know. You don't really have options if you don't know about options.”