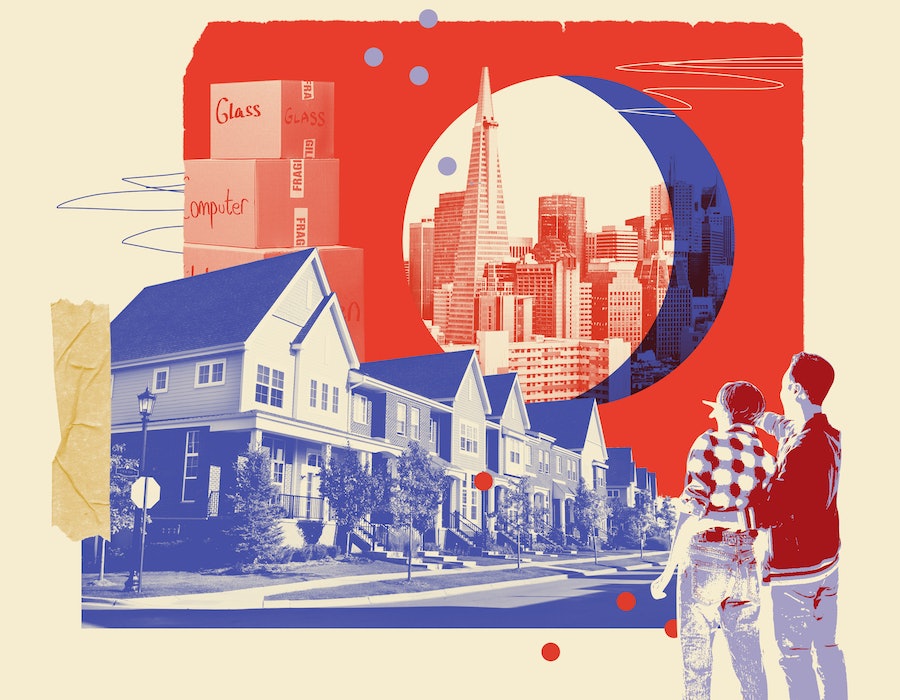 Millions of U.S. adults have relocated during the pandemic, with one major trend being moving away from major cities to suburban or rural areas. Beset by financial and personal setbacks, many sought more affordable living situations as well as a respite from crowded urban setups in favor of more open space. For some, changing location was already back of mind, but the shakeup of life as we knew it gave the push to finally make that major lifestyle shift. Bustle spoke with four couples who, over the past 12 months, decamped from the city for quieter pastures. Here, they share what they love about their new lives, what they miss, and where they’re headed next.

Empty nesters, newly debt-free, seek an adventure in the PNW

Lisa and Will LaBrie, 42 and 49, had lived in Southern California for 20 years when the pandemic hit. Their beloved Los Angeles was pretty much shut down, and wildfires were blazing in the mountains near their home in San Gabriel Valley. They were getting ready to send their oldest kid off to college in Vancouver when they decided to pack up their lives and move to the Pacific Northwest, too.

“It was the convergence of just the right circumstances,” Lisa tells Bustle. “Home prices were selling really well, and we weren’t sure if 2021 would bring an economic downturn that would cause our house to drop in value, like in 2008 — we didn’t want to get stuck again.” So they sold their home in 40 days, paid off Lisa’s student loans, moved their kid into the dorms, and signed a temporary lease on a place in the woodsy, coastal city of Bellingham, Washington, just 30 minutes from the Canadian border.

“It feels like the biggest weight has been lifted off me. It’s life-changing — I feel like I can think about a future in a different way.”

Will has rediscovered his love of mountain biking; Lisa hates the cold, but they both enjoy exploring nearby trails with their rescue bull terrier, Teddy, and meeting friends (who they met through other friends they already knew in the area) on socially distanced hikes. Both nurses, Lisa works from home writing reports on oncology patients, and Will took a job at the hospital in town. They miss the culture of L.A., although they couldn’t do everything they love there, anyway. “Can’t go to museums, can’t go to concerts,” Lisa says. She does note that the food in Bellingham leaves something to be desired — noting that it’s bland and lacking in options — and Will feels frustrated that they can’t seem to find any decent fresh fish spots despite living on the coast.

The biggest takeaway may have less to do with location and more about potential. “I don’t have any debt, and it feels like the biggest weight has been lifted off me. It’s life-changing — I feel like I can think about a future in a different way,” says Lisa.

They’re not sure what’s next when their lease is up in April. But they’re up for adventures. “We’re like 20-something-year-olds, where every idea sounds good,” she says. On the vision board: a potential jaunt in an international city. Even if they relocate domestically, to stay close to family, Lisa says access to an international airport is essential.

Harlemites Nolan Taylor, 34, and Dean Williams, 40, had been pondering a move to the town of Saratoga, New York, for a few years. Williams originally hails from upstate New York, and Taylor craved a closer proximity to the outdoors. When the pandemic hit, it felt like the perfect time. The couple were “on top of each other” in an 850-square-foot apartment, Taylor explains: “We needed more space — we needed nature.”

In November, the two relocated to a rental just outside of downtown Saratoga, which Taylor says “provides everything — great food, and you have the Adirondacks right there.” The two have access to a hiking trail literally right outside their door; at the same time, the town is bustling enough to evoke the urban vibe they’ve come to expect as longtime city dwellers.

When they’re craving more of a big city fix, NYC is only about three hours away, which comes in handy for Taylor’s weekly commutes back to Manhattan for his job as a broker and owner of a real estate group. (Williams works from home full time as a tech recruiter.)

Their one critique? “We’re an interracial couple, and the one thing that’s different for me is the lack of diversity out here,” Taylor says. “In Harlem, you walk outside and see Black people all over. Here, it’s a little different. Everyone is very nice and welcoming, though.”

The couple likely aren’t returning to NYC, where they each lived 11 and 15 years, respectively: They’ve put a lot hold on their “dream place,” a house about 5 miles from downtown Saratoga. “I’m from San Francisco; I’ve been doing the whole city thing my whole life,” says Taylor. “Now this is where I’m comfortable, this is where I feel at home.”

A native New Yorker warms to the ’burbs life with Jersey-born husband, toddler in tow

Sachi Ezura, 34, never thought she’d leave New York City. But in September, the native New Yorker, along with her Jersey-born husband, Jake Plunkett, 34, and their 1-year-old daughter, Eleanor, decamped from Williamsburg, Brooklyn, to buy a house in Rutherford, New Jersey.

Ezura misses the spontaneity of New York — hopping on the subway to grab dinner with friends or taking a walk in the neighborhood and wandering into a thrift store or bookshop. But the combination of the pandemic and having a baby had significantly limited her social life, regardless of being in NYC or the ’burbs.

In Rutherford, Eleanor has a yard to play in and grandparents who live nearby. Plunkett and Ezura, who both work remotely as producers, have their own offices. “Before we were sitting at the same dining room table trying to both work in the living room, and we would have to stand outside our apartments if we had phone calls,” she says. Ezura says she’s also gotten into decorating, creating a Pinterest board for what she’d like her office to look like. “I bought a fluffy pillow and a neon light. It makes me feel like it’s a fun room to work in. My husband thinks it looks like a college dorm,” she jokes.

A major impetus to move was finally being able to buy a house after renting in NYC for 10 years. Luckily, the city isn’t far away — just a 20-minute bus ride into Midtown Manhattan. “I’m much closer to the majority of places we would hang out than if we moved to like, Bay Ridge,” she says. It’s important to her that Eleanor grows up experiencing NYC culture — that “we could still go into the city all the time to watch theater and go to museums.” And the food options are just as good in Jersey: “I was scared that I wouldn’t be able to order Korean food or Dominican or whatever, but everything you can get in New York you can get in New Jersey.”

The ’burbs even have a charm of their own: “We did Halloween here, and that was the first time I was like, I love this,” she says. “It felt like Halloween in a movie to me. Everybody was out on their porch, and we rode Eleanor around in a little Radio Flyer wagon and I felt like a fun suburban mom.”

“Before we were sitting at the same dining room table trying to both work in the living room, and we would have to stand outside our apartments if we had phone calls.”

Still, Ezura recognizes the New York FOMO may return. “I think I will have a more substantial emotional reaction once everything’s back to normal and people are able to go to parties and restaurants and bars,” Ezura says. But “right now, it feels like I’m living my best life.”

Laid off in Queens, New York, they found refuge at the MIL’s in the woods of Western Canada

In summer 2020, Vanessa Golenia, 36, and Peter Gynd, 39, were living in Ridgewood, Queens, when things began to feel untenable. The art gallery where Gynd worked as gallery director shut down, putting him out of a job; and Golenia was working as director of strategy and copy at an ad agency but felt like layoffs were imminent. (She was eventually laid off that September.) Worried about how they would afford rent, the two decided to relocate to the outskirts of Powell River, a small city in British Columbia, where Gynd’s mom lives alone in a four-bedroom house near the Georgia Strait. “We didn’t think it would be this long, but eight months later, we’re still here,” says Golenia.

Before the move, Golenia’s closest access to nature was the Evergreens Cemetery in Bushwick, where she’d take her rescue dog, Stormy Daniels, for a breather. In Powell River, they spend their days tromping through the forest or walking on the beach. “It feels like I’m in a little fairy-tale land,” she says. “I’ve learned how to pick mushrooms.” She also says she’s really bonded with her mother-in-law.

Gynd, who’s now in grad school, and Golenia, who’s freelancing, each have their own rooms to work in — a welcome change from their railroad apartment in Ridgewood — but they do miss the city. “It feels really isolated, a little like Pleasantville. I miss the chaos and the realness of New York,” Golenia says. It’s also been challenging being far away from friends and family, in NYC and California, respectfully, and it was particularly surreal to watch events like the California wildfires and the 2020 election unfold from afar. “It felt like literally the U.S. was on fire and I was in another country unable to be with my family,” she says.

The two don’t have solid plans yet for next steps. Golenia has applied to grad school. Where she gets in, and whether Gynd’s school shifts to in-person learning come fall, could dictate where they move next. “In an ideal world, if it was up to us, what we would do is spend half the year in Canada and half the year in either New York or Mexico because I’m half-Mexican and a lot of my family’s down there. I really miss Mexican culture,” Golenia says. For now, they get their heat through a wood stove and, in warmer months, sit on the deck and hear whales sounding their blowholes in the strait.