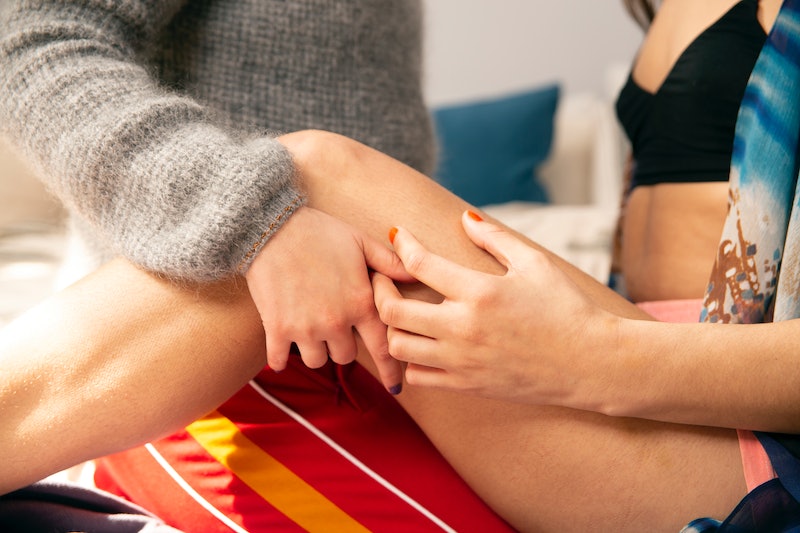 In this week's Sex IDK column, Emma McGowan, certified sex educator and writer, answers your questions about whether or not lesbians can get STIs.

Q: Can lesbians get STDs?

This question is a common one! So, the short answer, Reader, is: Yes. Lesbians can get sexually transmitted infections(STIs). But before I get into the long answer, I need to give my standard disclaimers about STIs. There’s no way for you to get an STI if the person you’re having sex with doesn’t have an STI. I know that may sound super obvious, but so much of my sex education was basically like, “If you have sex ever, you will get all of the infections, and your genitals will fall off, and then you will die.” But that’s just not true.

So, say it with me: The only way to get an STI is by having sex with someone with an STI.

OK, now let’s talk about lesbians with vulvas. People with vulvas who have oral sex with people with vulvas are at a lower risk of certain STIs, most notably HIV/AIDs. In fact, there’s almost no risk of getting HIV from going down on someone with a vulva or having someone go down on your vulva, according to the Centers for Disease Control and Prevention (CDC). Scientists aren’t totally sure why this is, but it’s likely because the skin on the labia (which is the official name for your vaginal lips) is more like the skin on the outside of your body than the more permeable internal skin of the vagina. Nice!

Tribbing — which is the official word for rubbing vulvas together — comes with an STI risk that spreads via skin-to-skin contact. That includes herpes, HPV, syphilis, and trichomoniasis. Tribbing can also open up tiny tears in the vulva if there’s a lot of friction, which increases the risk of chlamydia and gonorrhea, both of which are spread through bodily fluids.

Now, let's talk about lesbians with penises who have sex with lesbians with vulvas. For this group, the risk of STIs is the same as it is for heterosexual couples. That means both people are potentially at risk of getting HIV, herpes, HPV, syphilis, trichomoniasis, chlamydia, and gonorrhea. The person with the vulva is at higher risk than the person with the penis, however, as vulvas and vaginas are more prone to tearing than penises are.

I know this all sounds kind of complicated — and there are a lot of very medical-sounding words in here. But the important thing to remember is that sex comes with a certain degree of risk, no matter your sexuality or body parts. There are ways to mitigate those risks, of course. You can use a lot of lube to prevent tearing. You can use a dental dam and/or condoms. You can get tested and then decide to be monogamous with someone. But no matter what you choose to do, remember: Most STIs are curable, and all of them are treatable. You’re going to be OK.

More like this
35 Sexy Texts To Send Your Partner
By Griffin Wynne and Carolyn Steber
What Are Swingers? Everything You Need To Know
By Lexi Inks
Jess & Anya Are The High School Sweethearts Who Gave Love A Second Chance
By Jessica Morgan
My BF Wants To Stay Friends With His Ex Primary Partner. What Do I Do?
By Sophia Benoit
Get Even More From Bustle — Sign Up For The Newsletter