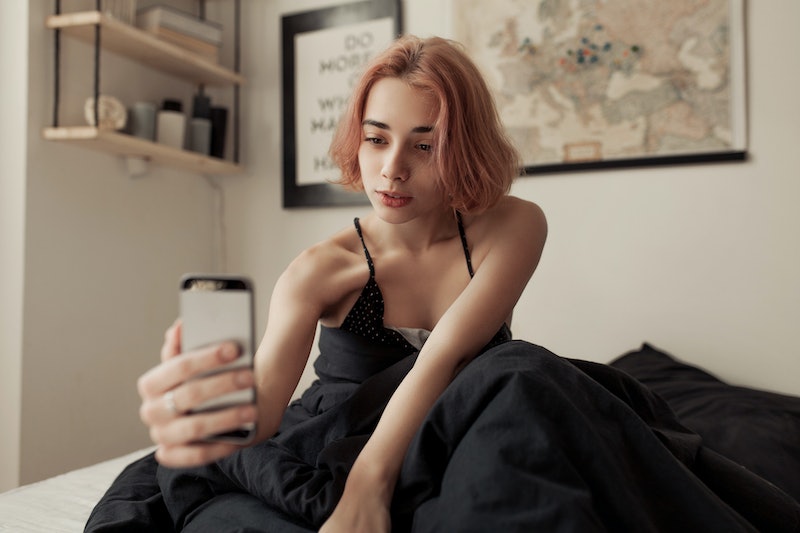 Ally, 22, has been seeing their partner since early 2020. But once their universities shut down because of the pandemic, the pair were forced to return to their hometowns of Boston and Philadelphia. They’ve been operating in long-distance mode ever since.

“Long-distance usually ends up feeling like there’s a lot of blame to go around when it comes to who’s not meeting who halfway,” Ally tells Bustle. “That can be especially true during a pandemic because of high stress levels.”

Ally's partner tested positive for COVID in early December, putting their reunion on pause so they could isolate alone. Since the two don't know when they'll next see each other, they've had to build intimacy in new and provocative ways, like finding the time to intimately connect via phone, video chat, and more. “The longing is still there, but we’ve gotten good at being able to convey the same emotional values in other ways,” Ally says.

The two have grown to expect “very little physicality” from each other. Nowadays, their sexual relationship is restricted to their smartphones. They even dictate each other’s sex toys — a favorite of theirs is the clitoris-sucking Lelo Sona Cruise — through FaceTime and phone calls, telling each other when and where to touch themselves, creating makeshift long-distance phone sex toys.

“I’d like to think that using sex toys during our FaceTime sessions provides a nice segway for when we see each other again in person,” Ally says. “[The independence] helps you learn about each of your intimate needs in a way that you wouldn't be able to if you were having sex in person."

In 2020, it was harder than ever to see, touch, and feel connected to loved ones. While for many, that means separation from grandparents, parents, or siblings, COVID-19 has also kept romantic relationships at a distance. But humans are smart, adaptive, and — above all else — horny, which means they've acclimated to their circumstances. And for long-distance relationships (LDRs), that means switching up how they get off from miles away. With no end to the distance in sight, couples have been experimenting with Zoom and FaceTime sex, incorporating long-distance sex toys specifically designed for a partner on the other end of the screen — and they're doing it for the first time.

Remote-controlled sex toys have been around since the nineties, but several sex toy retailers saw sales spike in 2020. “Remote-control operated toys have certainly been in high demand this year as couples look to shake things up around the house and from afar,” a representative from online sex toy retailer Lovehoney tells Bustle. “It was no surprise that there has been an increase in sales during the pandemic, as couples separated by lockdown sought ways to maintain an active sex life while apart." Adam & Eve witnessed gravitation toward remote-controlled toys too, Glenn Mersereau, director of e-commerce, tells Bustle, along with an increase in vibrating panties sales.

A plethora of Lovehoney’s annual bestsellers were from sex toy company We-Vibe, which offers a line of long-distance, remote-controlled sex toys. We-Vibe vibrators pair with We-Vibe Connect, an app that allows video, text, picture sharing, and lets your partner control the toy from a different location. A new session is created each time the app is opened, meaning there’s no chance of any texts mistakenly going to the wrong phone contact. This makes things stress-free for couples, especially those who are beginners to the long-distance sex game.

Kelly, 24, works in New York, while her boyfriend operates out of Boston. The pair have been in a long-distance relationship for nearly six years, and while they’ve remained strong since the beginning, the pandemic and their decision to quarantine apart has put a strain on their psyche. Making the decision to reprioritize their dwindling sex life, Kelly and her boyfriend resolved to purchase a We-Vibe Chorus.

“We like to sext when we’re not in the same city, but we’re still in the mood,” Kelly tells Bustle. “We tell each other what we’re doing to ourselves, or what we’d do to each other if we were in the same room. But with this toy, my partner could do something to me in real-time, even without being in the same place.”

Kelly says that long-distance sex has given her the opportunity to explore her body in a nuanced, positive way. “You have a lot of time actually to figure out what works for you,” she tells Bustle. “It’s just you alone, even if your partner is on the other end of the phone while you’re getting off. You have time to figure out what you like, which becomes all the more helpful when you’re together.”

Casey, 25, is a frontline worker in a New York City hospital, which means that she sometimes goes days without seeing her partner or having one-on-one time. But when Casey's partner bought the We-Vibe Chorus over the summer, they were able to experiment with new sexual fantasies.

And while remote-controlled vibrators have been specifically popular during the pandemic, there are tons of distance-designed sex toy variations on the market. Take the OhMiBod Club Vibe, for example: Turn this device on to ‘listen’ mode, and it will vibrate along with the music it hears in your environment, explains Jenni Skyler, Ph.D., a certified sex therapist and sexologist for AdamEve.com.

That said, Casey says that using a long-distance sex toy didn't just stimulate her pre-pandemic sex life but transformed it. According to Bryony Cole, founder of sex tech-trend forecasting organization Future of Sex, that's typical of couples outsourcing control of their toy for the first time — it can offer a level of spontaneity and creativity previously lacking in a relationship.

“My partner got me a long-distance sex toy as a gift for a reason,” Casey says. “It’s 100% transformed my views on intimacy."

Bryony Cole, sex trends expert and founder of the Future of Sex

More like this
Are Quality Time & Physical Touch Love Languages Compatible?
By Lexi Inks
7 Women Share Their Best Orgasm Stories
By Lexi Inks
How Do I Deal With Both ED & Premature Ejaculation?
By Sophia Benoit
Is It A Rebound Relationship Or The Real Thing?
By Carolyn Steber and Lexi Inks
Get Even More From Bustle — Sign Up For The Newsletter