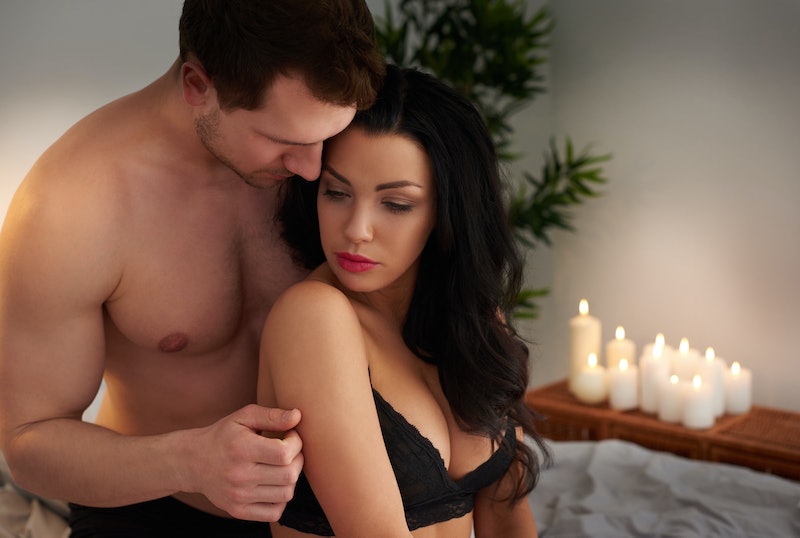 Have you ever wondered what doggy style feels like for men? You may already know that doggy style is one of the best sex positions for deeper penetration, and if you're working toward a climax, you've got the best chance at reaching a G-Spot orgasm if you're doing it like they do on the Discovery Channel. Not to mention, if you're having sex in public, doing it from behind gives you easy access and allows for a quick getaway once things are done.

But while it can be pleasurable for those involved (and if it’s not doing it for you, try these tips), women typically don't have a good view of what's happening back there while it's all going down. When you're on the receiving end of doggy style, watching your partner's reaction can ends up leaving you with a stiff neck. Of course, you speculate that thrusting into you probably feels pretty damn good for them, too. But have you ever wondered about the specific sensations your partner is feeling when they're giving it to you from behind?

To get to the bottom of this (pun intended), I looked into why guys like doggy style and asked men to describe their candid take on what it feels like for them. Here's what they had to say:

For Nelson, 27, doggy style is a position where he can take control. "It's primal and totally dominating and totally awesome," he tells Bustle.

Sam, 29, describes doggy style’s feeling similarly. "I don't know that I can do what doggy style feels like justice, but I imagine that it feels the way you do when you're on top,” he tells Bustle. “Because you have control over it, every way that you move your body makes your dick feel something incredible."

As Oliver, 24, puts it, doggy style feels like ... something very specific. "It feels like your dick is running in and out of a jar of warm jelly," he tells Bustle.

Rick loves the power doggy style allows. "It's very much a power thing,” he tells Bustle. “I like being in control of the speed and depth of penetration and being able to surprise her with each thrust. Very hot, especially when my lover grabs my arm while we are at it hinting at an orgasm."

Doug, 25, takes it a step further, comparing the feeling of doggy to an adrenaline sport. "Doing it doggy style is like racing your car with NOS in The Fast and the Furious,” he tells Bustle. “If feels that awesome and your penis feels that powerful."

As Hashim, 35, puts it, doggy style allows for greater depth. "I get a sense of power as I enter from behind, because not only am I literally driving, but it's also the position which my penis will the go deepest, so I get a sense of satisfaction out of the reaction that comes from it," he tells Bustle.

Kyle, 23, agrees."You definitely get deeper when you do it doggy style,” he says. “When I switch from missionary to doing it from behind it feels like, wow, I didn't know I could get in there this much further."

5. Doggy Style Has The Best View

For Kevin, 27, it’s both the feeling of doggy style and the view that makes it the best sex position. "Doggy style is the position where I finish the fastest,” Kevin tells Bustle. “It feels amazing, but what really gets me off is the view of my dick going in and out and watching her ass cheeks shake."

For Corey, 31, when you know, you know. "You feel like, out of everything you could do with your dick, doggy style is why you have one,” he tells Bustle. “It's what you're supposed to be doing with it. It feels that right."

As Matt, 29, says, doggy style feels like a standing ovation. “Like the grand finale. It can't get any better and so it comes to an end pretty quick. At least for me," he tells Bustle.