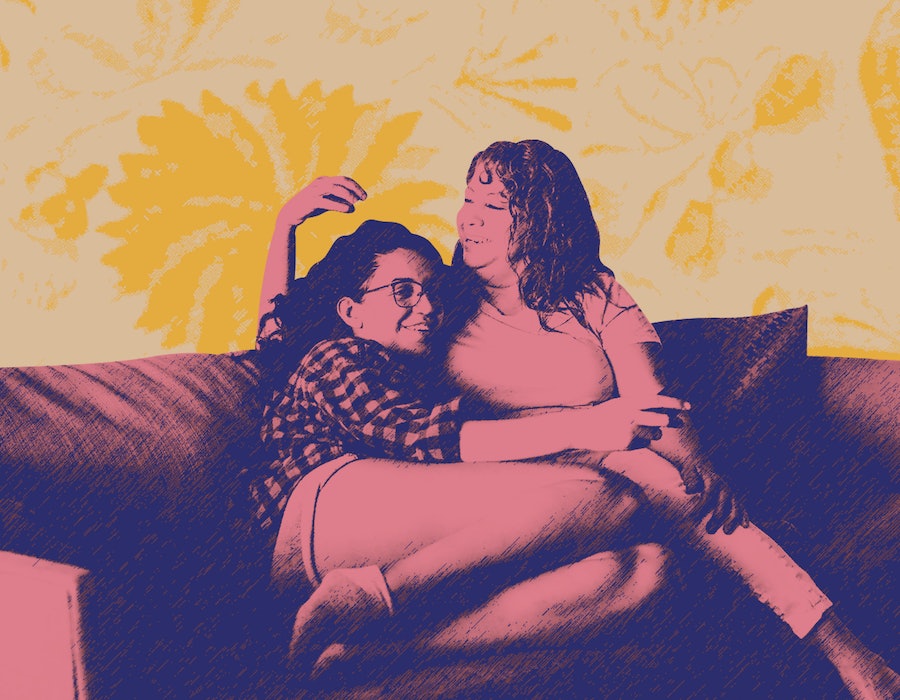 “La ropa sucia se lava en la casa” — don’t air your dirty laundry in public. That’s just one phrase Latina women might hear when trying to talk to their parents about their mental health, the assumption being that depression, anxiety, or other mental health issues shouldn’t be talked about openly — even to a therapist.

Almost every culture has some stigma around talking about emotional wellness, especially across generational lines. But for the Latinx community, there are some very specific barriers to having these conversations.

“Our culture has been taught how to survive and make it out of the most difficult issues — from poverty, abuse, racism, etc. — all with the mindset of ‘just keep going and keep working hard,’” says therapist Nicole Serrano, LMFT. “These are not bad attributes or characteristics. Many of us can feel pride in our strong work ethics and si se puede attitudes; however, many times mental health and wellness are sacrificed here.”

“I distinctly remember growing up with the idea that therapy was for people who had too much time on their hands, so they’d spend their extra time picking apart penny problems while some of us were out here hustling,” says 28-year-old environmental activist Diandra Marizet, who is of Mexican descent. “It wasn’t until I personally sought therapy, after falling into a three-year-long depression, that I finally unlearned that association.”

Other Latinxs might associate mental health issues with a “lack of faith” or prayer, as one 2019 study found. These beliefs, according to the study, can discourage people from seeking help outside of religious settings; they might believe depression or other disorders can be cured by prayer, or be afraid of being perceived as faithless.

These stigmas have serious consequences. Only a third of Hispanic adults get mental health care every year, according to a 2019 report from the Substance Abuse and Mental Health Services Administration (SAMHSA), compared to 45% of the general population; the National Alliance on Mental Illness cites language barriers and lack of health care, in addition to cultural stigma, as reasons why.

While talking to family members about mental health can be a source of support, Serrano acknowledges that it’s often easier said than done. “Sometimes family members shut down when we talk about certain traumas or discuss how to confront something in a healthy way. This does not mean all hope is lost or it’s not worth it, it just means that these things can take time and sometimes we have to recognize limitations others have around this topic,” she says. “It is important to remember that any small discussion about mental health is progress and progress is not always perfect.”

While the thought of starting these conversations may be intimidating, they can be easier to initiate if you know others have done so successfully. Below, 10 Latinx women recount their positive and not-so-positive experiences talking about mental health with their parents. Their stories show how these conversations aren’t always easy, but are always valuable.

“Speaking to my parents about my mental health has been a journey. Often, I’m afraid to bring things up because I don’t want boundaries I create to become an issue, or for them to think what I bring up is their fault. When I started telling them about my anxiety, it was important for me that they understood that what I needed most was their compassion. It’s been a process but one I’m glad I’ve embarked on; it’s ultimately given me room to have these critical conversations and practice honesty without conditions.” — Adriana, 24

“Pre-therapy, I introduced mental health by using phrases like ‘I’m just tired’ or ‘I’m stressed’ to explain to my parents why I was sleeping so much — I didn’t have the language or understanding of how depression and anxiety manifested. Then I decided to be honest: I would tell them, ‘I’m depressed’ and ‘I’m anxious.’ My parents didn’t know what to say or how to offer support at first, but I kept at it. Fast forward to today, my mom is in therapy too, at 62.” — Isabeth, 29

Depression Is Not A Choice

“When my father found out that I was dealing with depression and an eating disorder as a teenager, he had a hard time accepting it. Growing up in Guatemala with very little conditioned him to believe that if you have everything you need, you can’t possibly be depressed. It took many discussions and family therapy for him to understand that depression is more than just ‘choosing to be unhappy.’ He’s grown a lot since then and is very supportive now.” — Alessandra, 23

“My Colombian parents are very old-school. With my therapist’s help, I told them how therapy has helped me unpack all the heavy weight I never realized I was carrying — the anxiety and depression that no medicine could relieve, where even the sunniest days felt gray. Now they understand how important it is to be in tune with your emotions instead of bottling it up like they were taught to do.” — Cheryl, 24

“I recently started seeing a therapist for the first time. While they weren’t completely dismissive, my parents couldn’t understand why I needed to seek help from a stranger. They would react to my experiences by asking if they were bad parents. It makes me sad because I wonder how much relief they would feel if they spoke to someone about their own personal traumas.” — Alexandra, 27

More Understanding Than Before

“When my brother was diagnosed with a mental illness, my parents initially did not take it seriously — they thought it was just doctors wanting to overmedicate him. Over time, and after seeing what having a mental illness means, they have become more understanding, especially towards my own mental health struggles.” — Betty, 29

Sometimes, You Hit A Wall

“Whenever I would bring up mental health or why I wanted to seek therapy, my dad would tell me how he ‘doesn’t believe in that sort of thing’ and I shouldn't discuss it with him or my mom. He would make excuses for why he behaves the way he does — such as being raised by a single mother who wasn’t around a lot — and ignored his deep-down problems. I honestly haven’t spoken to my dad since our last discussion and that was almost three years ago.” — Reza, 25

“My mother always made it easy to talk to her about mental health. My father never fully understood my mental struggles, but he tries to be there at least. I appreciate how he’s stepped up since my mother passed away, even if he sometimes subconsciously invalidates my feelings. Healing from generational trauma is hard, but not impossible. He’s been a rock for me since the loss and has consistently encouraged me to seek out assistance and stay in therapy.” — Jarlenys, 19

“Our elders endured such hardships without ever receiving professional help, so they can’t fathom why our generation is so anxious and depressed — so it’s a challenge. When I speak to my parents about mental health, I usually write out what I want to say beforehand and try to keep in mind where they’re coming from. My parents definitely take personal offense in that I’m not happy, but paso a paso, step by step, it does get less awkward over time.” — Kayla, 28

“When I was 14, I told my dad that I felt anxious whenever I spoke in class. It took my family months to realize I wasn’t ‘lazy,’ and to cut out the ‘you have nothing to be anxious about’ comments. My dad made sure that my house was a safe space for me, and we continue to have mental health conversations to this day. I fully believed the stereotype that Latinx parents don’t believe in mental health, but my dad helped me see otherwise.” — Julles, 22