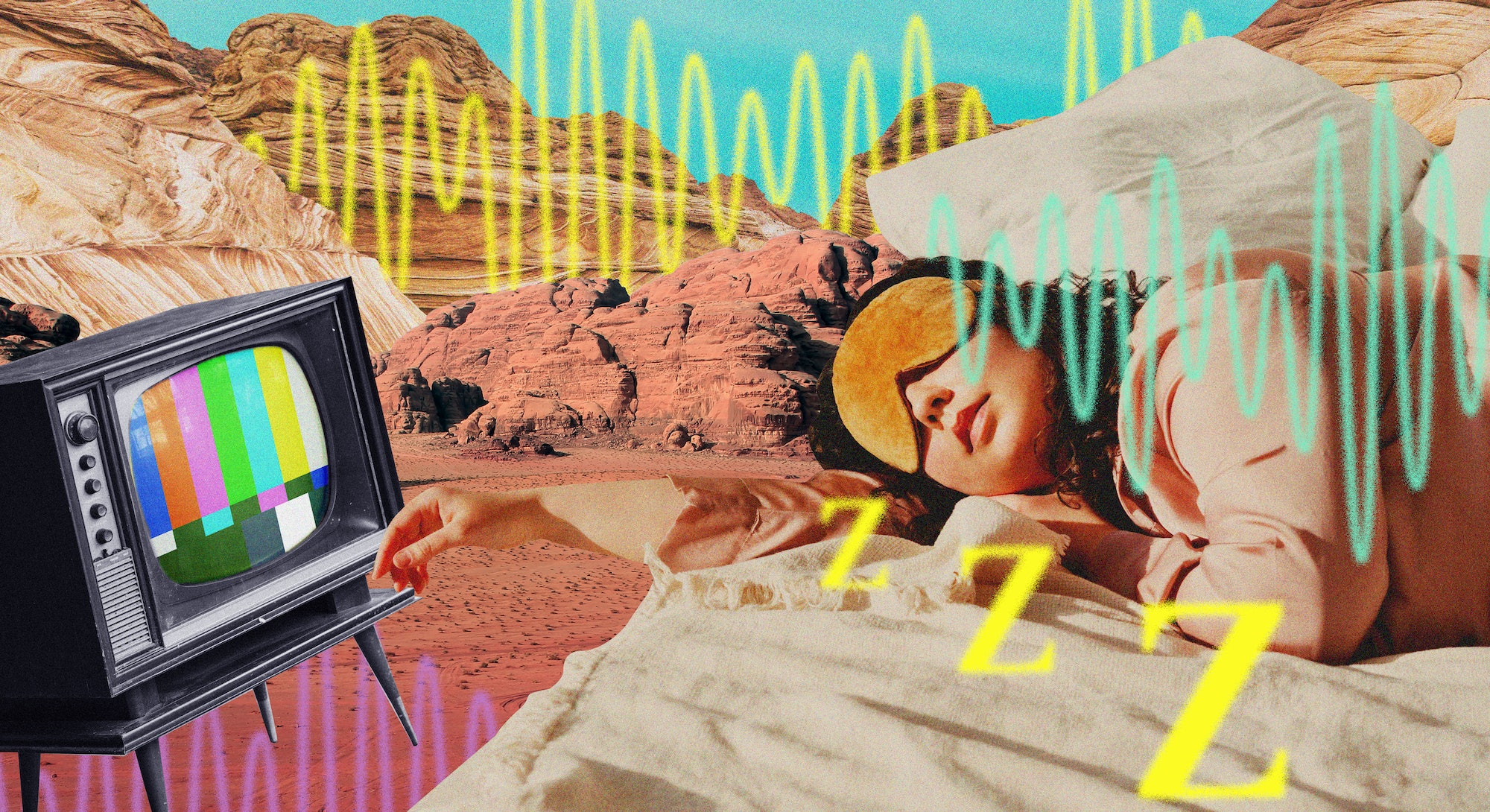 It’s nearly midnight. My teeth are brushed, my phone is on charge, and after I’ve mumbled something vaguely affectionate to my boyfriend, it’s time to sleep.

“What are we listening to tonight?” he asks.

You see, for the past seven years, I’ve been falling asleep in the exact same way — with a TV show on in the background. So, as the theme song to The Office (U.S.) belts through our bedroom, I feel myself drifting off.

Although the statistics around this particular sleeping habit are few and far between, what we do know is that, in 2011, a study commissioned by the National Sleep Foundation found that 60% of Americans watch TV immediately before going to sleep “every night or almost every night.” And the fact that it’s not uncommon to see articles such as “17 Relaxing Netflix Shows To Fall Asleep To” and “10 Podcasts To Help You Fall Asleep” floating about the internet tells us something, right?

In a bid to do some of my own research, I conducted a highly unscientific poll with my Instagram followers, many of whom responded saying that they too need a TV show or podcast to get to sleep. Even more interestingly, when asked why, most said that background noise is the only way that they can quiet their stressed-out internal monologue.

For the past seven years, I’ve been falling asleep in the exact same way — with a TV show on in the background. So, as the theme song to The Office U.S. belts through our bedroom, I feel myself drifting off.

“For me, it started with Harry Potter audiobooks. Until I was about 17, I couldn’t sleep without them,” Katie, a 27-year-old based in London, explains of her inability to sleep without background noise, which dates back to when she was a teenager. “Now I tend to just put Netflix or a podcast on. I know that everyone says sleeping with the TV on is bad for you, but there’s something really soothing about it. I get really anxious and, without having it on, I spend the whole night just reliving my day, panicking about everything I said or did.”

Up until recently, I hadn’t honestly put too much thought into why I couldn’t sleep without the TV — I just knew that I couldn’t. It started after I’d moved back to the United Kingdom from France, where I’d lived in a room-share with six other girls. It’s likely that I became so used to falling asleep in a room full of chatter, shift-changes, and close proximity that suddenly finding myself in total silence was somewhat overwhelming. My listening began with Friends. After six months of cycling through every episode, I moved onto Scrubs, The Office, Parks and Recreation, Brooklyn 99. Each show followed an unspoken tick list: nothing surprising or scary, just something with light, playful, and (by the end) predictable dialogue.

After around a year of this, I tried to go cold turkey, which left me lying awake for hours on end. Like Katie, I’d find myself reliving the day’s events, over and over again. I’d wonder if all my friends secretly hated me and if tomorrow would be the day that I’d lose my job or my house. I’d stare into the silent night, heart racing, frozen.

Until I caved and hit play on the familiar sounds of J.D. and Turk.

“It’s not as uncommon as you might think,” psychologist Dr Maryhan assures me. “If you’re anxious, then you’ll often find that your mind goes into overdrive [when trying to sleep]. It can feel completely overwhelming and having something on to distract your mind from that can help some people.”

“If you’re anxious, then you’ll often find that your mind goes into overdrive [when trying to sleep]. It can feel completely overwhelming and having something on to distract your mind from that can help some people.”

Dr Maryhan, who specialises in anxiety among young people, adds, “We all know just how important sleep is and your anxiety can have a huge impact on that.”

According to The Sleep Foundation article “Mental Health and Sleep,” “Anxiety disorders have a strong association with sleeping problems.” It’s a bit of a viscous cycle, it explains: “Worry and fear contribute to a state of hyperarousal in which the mind is racing, and hyperarousal is considered to be a central contributor to insomnia. Sleep problems may become an added source of worry, creating anticipatory anxiety at bedtime that makes it harder to fall asleep.”

Claire, 30, from Glasgow, can definitely recognise the feeling of a racing mind. In fact, she says, “I’ll be exhausted but still feel as if my brain is going a million miles per hour.” Her solution? “I’ll mostly watch something I’ve seen before. I think it’s the familiarity that does the trick. It just feels as if everything is safe.”

This definitely resonated with me. The shows that I select are always ones that I’ve seen thousands of times before. Because having something to go back to, something that won’t offer any surprises, is comforting. Especially when we’re stressed.

For Harry, 27, from London, background noise offers something different, though. “Whenever I’m feeling unsettled or in a new place, I fall back on [sleeping with the TV on],” he says. “When I was a child, my favourite thing was falling asleep to the sound of my mum having a dinner party downstairs and I think part of it is a continuation of that. I like hearing hubbub going on without necessarily being a part of it.”

Clinical psychotherapist and host of Psychotherapy — Off the Couch Stephanie Regan has recognised something else among her clients who need background noise to sleep. For them, it’s about creating white noise, which “works to block out normal everyday environmental noises that could cause a person of any age to startle awake or keep them awake in the middle of the night where solid and consistent sleep is needed the most.” But, again, it all comes back to feeling comforted. “Finding a noise that offers comfort can help improve anyone’s sleep,” she says.

“The silence just gives too much space in my brain and I find that I just plan these crazy fake scenarios. In the quiet and the dark, I just feel like something bad will happen. But as soon as I add noise, I feel comforted. It’s a security that’s unmatched.”

Jess, a 20-year-old from Manchester, shares this feeling of security within sound. “I’m naturally quite an anxious person,” she says. “The silence just gives too much space in my brain and I find that I just plan these crazy fake scenarios. In the quiet and the dark, I just feel like something bad will happen. But as soon as I add noise, I feel comforted. It’s a security that’s unmatched.”

However, while the dulcet tones of Michael Scott instantly soothe me, for my partner, it’s the opposite. Prior to meeting me, he would drift off in complete silence. He likes the quiet and my laptop-loving habits were initially a tricky issue.

A few months into our relationship, I had to explain why I can’t sleep without noise, saying that it’s the only way I know how to actually relax into sleep. Dr Maryhan believes this is the best way for two people to approach the subject of sleep needs: an open and honest chat early on in the relationship. She recommends explaining the issue to your partner and agreeing on some practical solutions together.

Six years into our relationship, my partner has become accustomed to my nighttime viewing habits. And while we’ve talked about phasing it out or exploring alternatives, we accept that, for now, The Office offers me something that therapy, antidepressants, and yoga have been unable to do: a good night’s sleep.