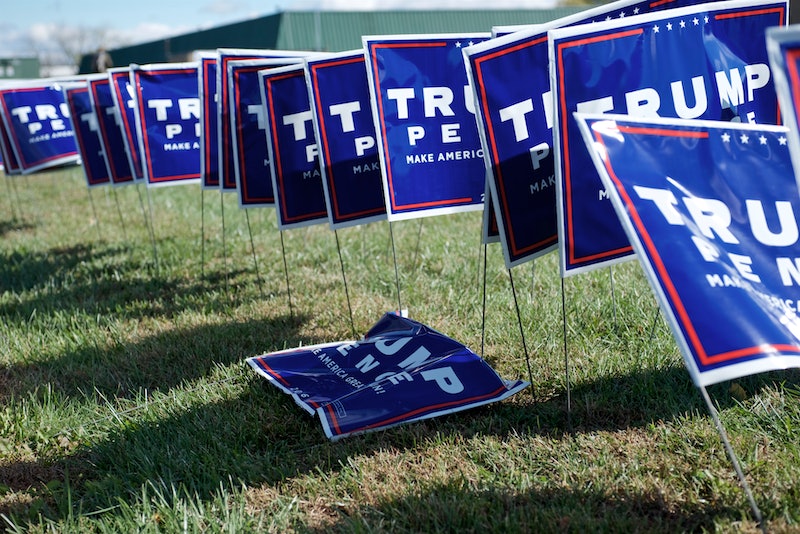 Growing up, 36-year-old Ashley*’s upbringing was so conservative, she recalls “being truly scared if Gore won and not Bush” in the 2000 presidential election, when she was in high school. Her political views shifted when she moved to a bigger city in her state for college, where she was exposed to more culture than her small town offered. She voted for former President Barack Obama in 2008 and 2012; her parents continued to vote down the Republican party line. While politics were never a major talking point in their conversations, that changed during Donald Trump’s rise to presidency.

After four years of Trump, she expected her parents to say, “We didn’t really know he was going to be this bad. We can’t do this again.” But instead, she says, “They doubled down and it shocked me.” Her parents insisted that the 2020 election had been stolen from Trump, that the Capitol insurrection was a mainstream media hoax. A phone call the day after the insurrection, Ashley says, was “the first time in my life I have ever hung up on my mom.”

Now, after a cool-off period following the insurrection, Ashley and her parents have begun to text a little, mainly to share updates about Ashley’s two children. Her kids FaceTime with their grandparents, too. “I have no real desire to have a conversation with them right now,” she says. “I just have nothing nice to say.”

Ashley is one of many millennials left navigating how the post-Trump era will affect her relationship with her parents. According to a December 2020 study from the Pew Research Center, only 2% of President Joe Biden voters feel that those with opposite political views understand them well, a feeling shared by a similar number of Trump voters. Approximately one in 10 voters in both camps wish their political counterparts wouldn’t “ascribe negative stereotypes” to them. For families with red and blue members, these numbers illustrate the difficulty of communicating across the aisle — or the dinner table. With Trump no longer dominating headlines, families across the nation are finding that rebuilding their relationships involves patience, compromise, and strategic avoidance.

“Because she is my only parent left, I don’t want to sever that relationship.”

“Family systems vary significantly in terms of the degree to which they can handle change or differences of opinion,” Jennifer L. Gonyea, PhD, LMFT, LPC, an associate professor at the University of Georgia and licensed marriage and family therapist. As a result, fallouts over politics are far from uncommon, but not without hope for reconciliation. Gonyea stresses it’s not about trying to change a family member’s opinion; rather, if each party focuses on why the relationship is important — and worth maintaining, regardless of disagreements — the connection can be preserved.

Jessica* tries to emphasize the importance of keeping her mom in her life while navigating their post-Trump relationship. After Jessica’s dad’s death in 2014, her mom — a lifelong social liberal/fiscal conservative-turned-MAGA hat owner — started spending a lot more time online, getting involved with ultra-conservative Facebook groups. “There have been a few incidents when she’s posted really inflammatory political things on Facebook, and my sister and I have asked her to take it down,” the 38-year-old says.

“I know a lot of her behavior is because my dad is not here and she’s on her phone more because she’s single,” she adds. “But it’s been hard. Because she is my only parent left, I don’t want to sever that relationship.” Though she and her mom have had to take “small breaks” from one another, especially during the peak of the 2020 election, Jessica focuses on the love they share in order to move past tough conversations.

“I have to tread lightly, because I don’t want to insult her intelligence or who she is as a person,” Jessica says, adding that it helps to know that what her mom says online may not always be what she means. Her mom is in favor of LGBTQ rights and immigration, and against the conservative Christian movement. One online quiz showed that she’s “definitely a Republican, but her views don’t match with Trump’s,” Jessica explains.

As the parent of a two-year-old, Jessica doesn’t want to keep her mom away from her grandson — she’s even having her mom move over 400 miles in June to be closer to her family. But she’s far more aware of the family dynamic now than she was during the Obama years. “As my son gets older, I am definitely going to be careful about knowing what she says to him,” Jessica says. “My husband and I joke that we’re going to set up a Fox News blocker in her house to solve our problems.” Jessica says she hopes that as Facebook continues to crack down on misinformation and Trump “fades into the background,” her mom might eventually see that she fell for Trump’s marketing, not his politics — and take up some new political views.

For Paige*, 38, the tipping point in her relationship with her parents came during 2020’s Black Lives Matter protests. After Paige posted on Facebook in support, her mom told her how “disappointed” she was. “She said it was killing her, knowing this is what I believed,” Paige says. “She asked me if I was ashamed to be white, ashamed to come from a family with money.”

After that conversation, Paige and her parents have mostly agreed to avoid talking about anything even remotely political. Though she’s embarrassed to admit it, Paige has found that it’s easier to stay quiet when they vocalize opinions she doesn’t hold. “If they say something [racist] that has to be called out, then I will. But if they’re just talking smack about liberals, I sit there quietly.” She wonders what her parents thought about the Capitol insurrection, but they’ve never talked about it.

Also a mother of a young son, Paige says conversations with her parents largely focus on him, allowing them to avoid potentially controversial topics. Ironically, Paige says, this shift in focus has been easier after she divorced her husband over his support of Trump in 2016 — a life change her parents supported, their concern for Paige outweighing their alignment with her ex’s politics.

Paige says the hardest thing is knowing there are strangers that she can have more in-depth conversations with than her parents. “I grew up in a very strict environment where you don’t talk out of turn, you respect your elders. So that’s a hard dynamic today.” But sticking to it has allowed Paige a way forward with her family.

Ashley’s mom has reached out in the months since the insurrection, asking for the chance to explain why she supports the former president. “I said to her, ‘I am never going to understand how you can believe that. So now it’s my job to ... figure out how to navigate this relationship with you knowing you believe that.’” While she’s hopeful that some connection can be rebuilt, she also knows it won’t be what it once was. “We just have these shallow conversations. It makes me sad just thinking about it. We’ll never have that closeness again.”

Looking ahead, Ashley anticipates that she won’t be able to discuss religion or politics at all with her family. Even now, she says that she’d love to have her kids spend a week over summer break with their grandparents, as they typically do. “I think we can get back to that.”

More like this
Help! I Love My Boyfriend, But I’m Struggling To See A Future With Him
By Sophia Benoit
Are Quality Time & Gift-Receiving Love Languages Compatible?
By Lexi Inks
The Differences Between Polyamory & Open Relationships
By Lexi Inks
20 Women Reveal Exactly How Long It Took Them To Get Over Their Ex
By Amanda Chatel and Lexi Inks
Get Even More From Bustle — Sign Up For The Newsletter