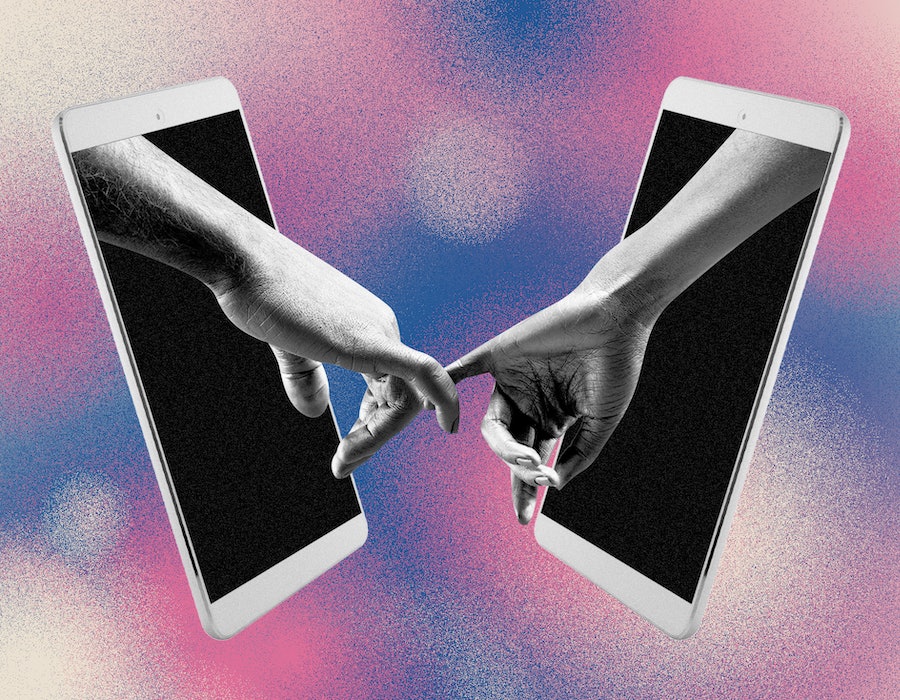 Leah, 25, has never lived in the same country as her boyfriend. She met Tom, 25, two years ago while traveling. The two have been in a long-distance relationship (LDR) ever since: She lives in Baltimore while he resides in London. They do plan to live together eventually — she’s moving to England this summer after her job contract ends — but they’re not waiting for physical proximity to kick their relationship into “serious” gear.

Rather than wait to see each other regularly before building a future together, Leah and Tom spent the past two years progressing in their relationship. “We’ve met significant milestones, [like saying] ‘I love you’ [and] meeting both families,” Tom tells Bustle. “[Leah] spent last Christmas with my family and me, and I spent last Thanksgiving with her family.”

Leah and Tom’s LDR predates the pandemic, but travel restrictions, quarantines, and safety issues have kept them apart for longer than ever before. And they’re certainly not alone; the pandemic has forced many couples to live apart, created new challenges for existing LDRs, and led to an increased openness in remote relationships. According to data from OkCupid, connections and conversations between singles across borders has risen nearly 50% since the start of the pandemic, and more people than ever before are setting their location preferences in the dating app to “anywhere.”

That’s not to say LDRs don’t have pitfalls — especially those with no end to the distance in sight — but lack of forward-momentum doesn’t have to be one of them. “We live in a time where everyone can design their own relationship styles,” Dr. Jennifer B. Rhodes, PsyD, licensed psychologist and founder of relationship consultancy Rapport Relationships, tells Bustle. “The problem is that people have expectations about the way relationships need to go, rather than surrendering to what is. If your perception and mindset are that this relationship can’t go forward because of the separation, that’s exactly what’s going to happen.”

Have A Conversation About Expectations

When you’re in an LDR, you and your partner need to be on the same page — not only about communication and behavior but also about your ultimate goals and whether you foresee the distance being a long-term thing. “Distance often pushes you to clarify your ‘status,’” board-certified psychiatrist Dr. Anjani Amladi, MD, tells Bustle. She suggests discussing specifics like how long you’ll be apart at a time, the circumstances that would prompt a change, the logistics and finances of one person moving to be closer to the other, expectations of monogamy, and desires for the future.

Janice, 33, had such a discussion with her now-husband before she left Chicago to take a job in New York City; ultimately, they agreed to not do long-distance for more than a year. “It helped that there was an end in sight,” she tells Bustle. “It’s hard to make life plans when you don’t know how long you’re going to be apart.”

Conversations about expectations can help accelerate a partnership toward future milestones, like moving in together or getting married. But clarifying your expectations doesn’t have to mean talking through the next 20 years — or even the next 20 days, for that matter. If you want to see how the LDR progresses without actually outlining every next step, that’s fine, too — as long as you agree. And Dr. Rhodes says that even if you do plan that far in advance, there’s no guarantee things will happen the way you envisioned. Focusing too much on that potential outcome can keep you from being present in your relationship as it unfolds. "The ultimate spiritual practice, in the context of a relationship, is to let go and really stick with the feelings that come up, decide what it is that you’re comfortable with, and communicate it,” Dr Rhodes says.

That mindset shift can then free you to move through your relationship in a way that feels right for you. For Carla, 35, that meant taking what some would deem an unconventional approach to the meet-the-family milestone. Carla and her boyfriend spent the first 10 months of their relationship living apart; he in Vienna, Austria (where they met while she was on vacation) and she in Ethiopia (where she was living for work).

When Carla learned her mother would be visiting Austria just one month into her mother’s LDR, she decided to plan another trip to see both her mom and her new partner. Carla was going to keep things separate, first visiting her mom in a town across the country from Vienna before returning to spend time with her boyfriend. "As I was halfway through my four-hour train ride to the mountains, my boyfriend texted me saying that he didn’t want to waste any time we could possibly spend together and asked if he could meet me the next day, spend time with us, and bring me back to Vienna himself,” she says.

While some people may have believed that meeting the parents “shouldn’t” happen so soon, Carla took the opportunity for forward movement — and it worked out. “Both [he] and I knew that we wanted to be together by then, and we were both willing to overcome certain ‘uncomfortable’ moments together, such as meeting parents," she says. "Those four days together convinced him it was also right to come to Ethiopia a few weeks later!”

As you work toward those big milestones, it’s crucial to get to know each other — and yourselves as a couple — in the less dramatic or exciting moments. “Without spending significant time with your romantic partner, it is easy to think of the relationship as being all fun and exciting all the time,” Dr. Beth Ribarsky, Ph.D., a University of Illinois, Springfield professor who specializes in communication and romantic relationships, tells Bustle. “Be realistic and be authentic. It’s easy to hide our flaws from afar, and you might be tempted to do so. But if this is a person who you see yourself in a long-term (and, perhaps in the future, geographically-close) relationship, they should get to know the real you and vice versa.”

Leah and Tom talk almost every day, making it a point to incorporating life’s more mundane moments into their virtual time together. “Sharing everyday moments like putting on makeup, making dinner, and commutes is so crucial to bond and show who you really are,” she says. “It’s also important to me that he sees me in all kinds of moods, including when I first wake up — no makeup, groggy, and begging my alarm for five more minutes.”

And while it can be tempting to spend every IRL minute you have with your partner alone as a couple, meeting and bonding with their loved ones can also help ground the relationship in reality — and be a game-changer in taking things to the next level. It certainly was for Rachel, 34, who has been with her now-husband for 12 years, the first three of which were on-and-off long-distance because of his job and filled with milestones like saying “I love you” and meeting each others’ families. “When we were together, we made an effort to get to know each others’ friends and worked to build a shared community of friends,” Rachel says. “I got to know the guys [he] lived with on the road, [and] I got to know those guys’ families.”

Ultimately, these gestures will only take you so far if you don’t have a foundation of trust — something Janice learned early on in her LDR. “It was hard to know that he was going out with other people and that I wasn’t there,” she says. “If he made a new friend of the opposite sex and they spent time together, it was challenging to know whether or not he could be trusted not to cheat. We realized that we had to have trust in each other for the long distance to work.”

And that realization can only come if you talk openly about your concerns. Looking back, Rachel stresses the importance of listening to your gut when building a lasting LDR. "If you have any doubts about what that person is doing while you’re apart, it is time for a hard conversation,” she says. “Trust is the strongest foundation for any relationship, and if it doesn’t have it from the start, you can’t go back and build it later.”

More like this
Is It A Rebound Relationship Or The Real Thing?
By Carolyn Steber and Lexi Inks
Are Quality Time & Physical Touch Love Languages Compatible?
By Lexi Inks
Cookie Jarring Is The Dating Term You Need To Know
By Sophie McEvoy
12 Ways You're Sabotaging Your Love Life
By Teresa Newsome and Lexi Inks
Get Even More From Bustle — Sign Up For The Newsletter