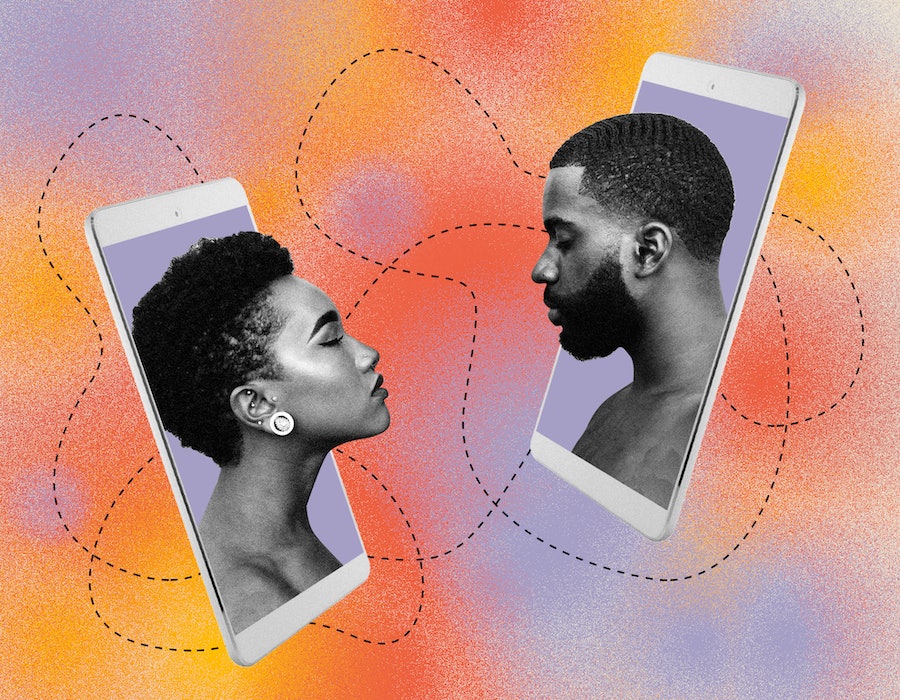 Rachel, 25, says she's in the best sexual relationship of her life with her partner Taylor, 38. They have an emotional connection, fun with sex toys , and a good grasp on exactly what gets each other in the mood. Only, her and Taylor are 3,000 miles apart. “The distance is hard, but we still find ways to have sex and be intimate,” she tells Bustle.

Rachel lives in New Jersey while Taylor’s in Washington, but the two go on nightly dates over FaceTime. “We talk about our days, how we’re feeling, and usually share an article we read that day,” Rachel says. Then, the pair turns to sexting. Rachel prefers sexting over phone sex because it gives her time to craft a message that she knows will turn Taylor on.

Since the pandemic began, travel restrictions and social distancing have forced many couples to live apart and effectively enter long-distance relationships. For those in preexisting long-term relationships, like Rachel and Taylor, it presents another hurdle of not having that guaranteed time to see one another again. As couples adapt to the new normal while attempting to maintain the challenges of a relationship from afar, their sex life can sometimes fall by the wayside. But as pairs like Rachel and Taylor have learned, with a little effort, staying sexually satisfied in a long-distance relationship is far from impossible.

"I was consistently having the hottest sex of my life."

Julie, 32, has discovered a similar reinvigoration in her own sex life. Mid-pandemic, she met “the love of [her] life” while swiping on OkCupid. Although the two only live eight miles away from each other, Julie and her partner chose not to meet in person for two months — a precaution for their higher-risk living mates. But while the two were apart, they experienced a sexual renaissance. “I was consistently having the hottest sex of my life,” Julie tells Bustle. “It was fire.”

And Julie isn't the only one discovering new ways to keep their long-distance relationship exciting by experimenting with phone sex. When Cameron,* 27, moved back in with his parents to social distance in Connecticut, he had to leave his partner, Naomi,* 26, behind in Minnesota. Although the two haven’t seen each other in person in over nine months, Cameron says they’ve never had kinkier sex.

“I’m normally the more dominant partner in the relationship, but one night, while sexting, Naomi asked me: ‘How would you feel about getting down on your knees for me,'” he tells Bustle. “I messaged back that it sounded really hot, then sent back: ‘I’ll do it if you let me call you, Daddy. How does that sound?’ Since that night, we’ve been asking each other leading questions like, ‘Have you ever thought about using a ball-gag?’ and ‘What are your thoughts on hot wax?’ It's opened up a whole new world of possibilities”.

"I send her recordings of myself orgasming."

Tatyannah King, a sex educator and sex coach with Blex Technologies, explains that utilizing voice notes in sexting helps trigger a sensual response. “Auditory stimulation plays an important role in desire and sexual response,” she says. Listening to your partner's orgasm can allow you to experience both physical and mental stimulation.

And when they don't have time for phone sex? Cameron and Naomi also enjoy receiving and sending nudes. “I fall asleep looking at the pictures Naomi has sent me every night to try to encourage a dirty dream with her in it,” says Cameron.

"That type of closeness that is cultivated over time through vulnerability and sharing yourself," she tells Bustle. "Cultivating that emotional intimacy can lead to better sex in the long-run."

By combining a steady dialogue about their evolving desires and experimenting with new sexual fantasies through virtual sex, these couples have found that long-distance can provoke enough creativity in the bedroom to reinvent the wheel.

“I thought the distance would be the death of our sex life,” Cameron says. “But it actually gave it new life!”

More like this
30 Clever Ways To Slide Into Your Crush's DMs
By Griffin Wynne, Carolyn Steber and Lexi Inks
The Differences Between Kinks & Fetishes, Explained
By Lexi Inks
Are Quality Time & Gift-Receiving Love Languages Compatible?
By Lexi Inks
6 Dating App Tips To Try If You're Looking For A Serious Relationship
By Lexi Inks
Get Even More From Bustle — Sign Up For The Newsletter