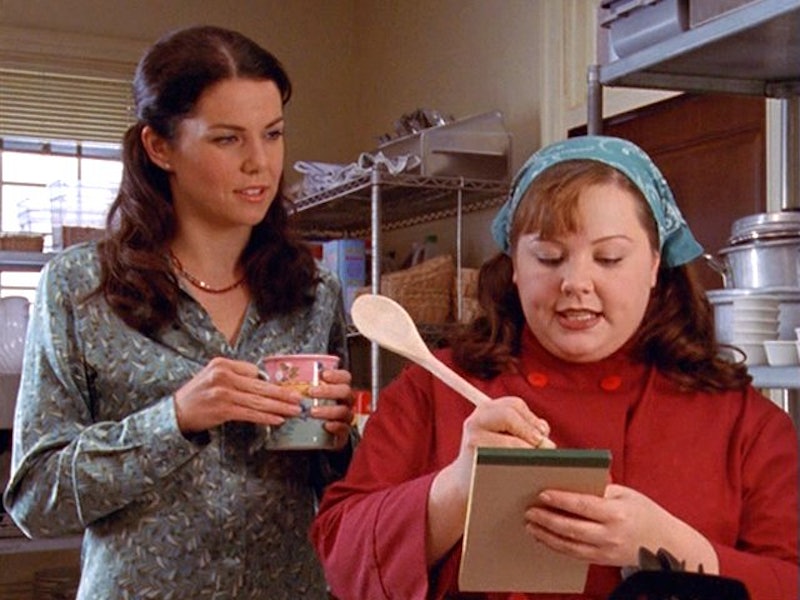 It was a business day just like any other: the sun was peeking through the plastic blinds, the copy machine was running low on toner, the break room smelled like microwaved leftovers and bulk coffee. But something magical was about to happen: Two coworkers were about to become friends.

"We bonded over having the same name," Ruby S., 35, an office administrator from New Jersey, tells Bustle. "'Ruby' is shockingly uncommon."

Although the two Rubys had worked together for over a year, they had never really chatted until a pregnant coworker asked the office about potential baby names. They bonded over childhood stories of never finding "Ruby" on keychains or mini license plates, and the two realized how much they had in common.

"We both speak another language and are interested in psychology and human development," Ruby S. says. "Having similar interests keeps us close."

Like the two Rubys, Meredith and Cristina from Grey's Anatomy, or Lorelai and Sookie from Gilmore Girls, an office friend can become so much more than a coworker. They're the person who also agrees that that hour and a half meeting could have been covered in an email. They're the first one to congratulate you when you get that promotion. And they'll always save you a slice of cake when there's an office party.

But with stay-at-home-orders extending and the economy on the brink of disaster, the future of the workplace is unknown. In an April survey from the Massachusetts Institute of Technology (MIT) of 25,000 American workers, 34% of participants reported working at home and nearly 12% reported being laid-off or furloughed. Twitter recently announced that even when social-distancing restrictions are lifted, their staff will be allowed to keep working at home forever. While a changing workplace will have effects on how we do our jobs, it'll also affect how build friendships with our coworkers, too.

In the name of colleague companionship, Bustle spoke to three people about their work wives, labor lovers, business boos — and where it all began.

When Carmen, 25, got a job as a user experience analyst at a small tech company, it was their first "office job". Though they were excited to grow in their career, they were also nervous about coming off as "professional" and kept to themselves.

After a quiet first week, Roxy, a friendly 34-year-old from the marketing team, introduced herself to Carmen one morning,

"She was super comforting and welcoming," Carmen tells Bustle. "We immediately clicked."

During their first month at the office, Carmen says they would go to Roxy's desk at least 10 times a day to chat and break up their workload. Though Carmen and Roxy work in different departments, Carmen says that Roxy really makes Carmen feel like they belong at the office.

"I never feel judged by her," Carmen says. "She's so receptive and open to learning and helping. She just wants to talk about anything that excites whoever she’s talking to."

After weeks of their budding office friendship, Carmen and Roxy took things to the next level — they hung out outside of work.

"Eventually we started getting drinks and food pretty often," Carmen says. "She is just a genuinely nice person without a bad bone in her body."

Although not seeing each other in the office has been a challenge, Carmen looks forward to G-chatting Roxy throughout the workday. Carmen shares that Roxy has always been uplifting and they're grateful for the space she's made for them in the office — even when it's from home.

When Mary, 56, first became friends with her colleague Diane, 68, about 14 years ago after their branches merged, her teenage sons had been getting into trouble. Because she lived in a gossipy town, Mary never felt comfortable opening up to her friends. But after a few weeks at her new office, Mary realized Dianne provided a non-judgmental space for Mary to express her feelings and ask for advice.

"At lunch time we would talk about our families," Mary tells Bustle. "She had older kids that had gone through the things that my kids were presently going through. She became a mentor and a friend."

Mary no longer worried about sounding like a "bad mom" or feeling pressure to keep up appearances. Hearing about Diane's experiences made Mary feel less alone — at work and at home.

"I think it helps to have something in common, whether it's you've both had problems with your kids or you've both gone through a divorce," Mary says. "She just took me under her wing."

Although Diane retired after Mary's transfer, they've stayed in contact over the years. Mary says they call each other on their birthdays and will try to get together once a year for lunch. Now that all of their kids are grown up and out of the house, Mary says she and Diane can bond about being empty-nesters and watching their kids navigate adulthood.

Betty, 89, & Addy, 94, A Nutritionist & A Social Worker From Massachusetts

In the late' 70s, a small nursing home in Boston hired Betty, a nutritionist, and Addy, social worker, to their growing team.

"We became friends almost right away, we were both new and hit it off," Betty, 89, tells Bustle.

Though they both had been working for years, neither of the women had worked with elderly folks before. In the beginning, they were both asked to do a lot of different tasks — some outside of their job descriptions.

"They were redecorating the nursing home, and we had to get the art," Betty says. "And that was quite a thing to do — get art for the rooms of a nursing home."

Betty recounts going to local art stores and antique shops with Addy looking for paintings to hang in the center. While their workplace made for minimal gossip or drama, Betty notes that Addy was always trustworthy. "You could tell her your problems and she wouldn't repeat them," Betty says.

Outside of work, both women loved to travel and relished sharing stories of their adventures. "It was a lot of fun to hear her stories," Betty says. "We had different backgrounds, but it melded together."

After a few months working together, Betty and Addy started sailing together on the weekends, sometimes sleeping on the boat.

While they haven't worked together in years, Betty adds that she and Addy are still great friends. Through they years they've continued to sail and travel together, meeting up frequently for lunch.

Looking back on her career, Betty says Addy's optimism always inspired her. "We solved a lot of problems," Betty says. "She was never negative or complaining. If we had a bad day, Addy would just say, 'Tomorrow will be better.'"

More like this
5 Signs You Have A Toxic Relationship With Yourself
By Lexi Inks
Cruz Beckham Teased New Music With An Adorable Nod To Mom Victoria Beckham
By Stephanie Topacio Long
Hilary Duff Is “Optimistic” About A 'Lizzie McGuire' Reboot
By Alyssa Lapid
The Spice Girls Are Set To Reunite At King Charles III’s Coronation
By Sam Ramsden
Get Even More From Bustle — Sign Up For The Newsletter
From hair trends to relationship advice, our daily newsletter has everything you need to sound like a person who’s on TikTok, even if you aren’t.