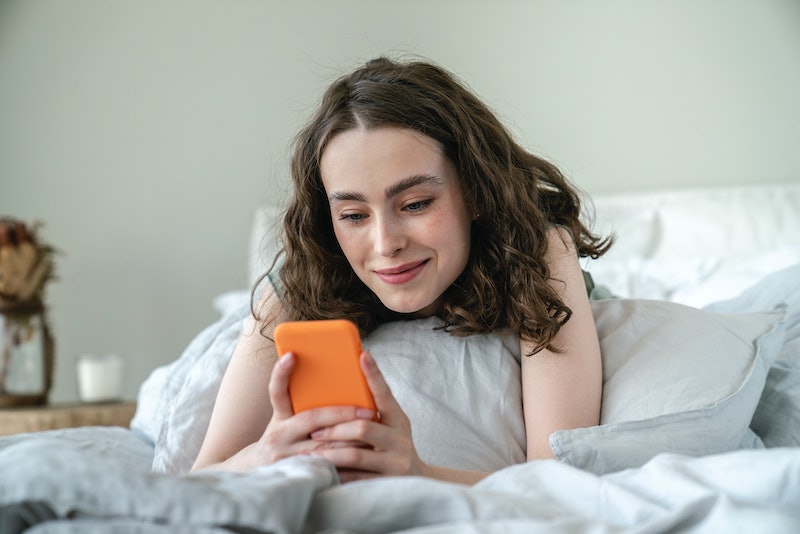 For a long time, scientists thought that human women had concealed ovulation and menstrual cycles — in other words, that nobody (aside from ourselves and the people we buy our tampons from) could tell when we were ovulating or having our periods. This is in contrast to a lot of other animals, who display their fertility really openly, basically hanging an "open for business" sign over their own heads whenever the chance has come to conceive a puppy/kitten/baboon/whatever. Humans are apparently more discreet. Or are they?

Ovulation, a phase of a uterus-haver’s cycle, involves the travel of an egg out of the ovaries for potential fertilization. More recently, the science world has discovered that, even if we’re not conscious of it, the female body sends a lot of signals about its ovulation cycle — some more evident than others. And the funny thing is that some signals are completely invisible to everybody, including ourselves. They seem to be evolutionary hang-ons without much impact on today's dating scene. But there are some that definitely get picked up — such as body odor during ovulation, for example — and they may be the key to understanding how your body attracts the lovin'.

While things like cycle length and menstrual symptoms can affect everyone differently, there are some typical symptoms that are characteristic of the ovulation phase. Dr. Mary Jacobson, a board-certified OBGYN and chief medical officer at Alpha Medical, shares that things like light spotting, slight cramping on one side of the pelvis, and even heightened senses of smell, taste, or vision can generally be expected when you’re ovulating.

It's not like we're flaunting our fertility, not by any stretch of the imagination. Ask the next person you get into bed with if they were attracted by your baby-making smell, and they'll doubtless say no (and probably never want to see you again, because you are weird). But ovulation does have some interesting effects on your body — here’s what to know.

1. You Look More Attractive To Partners

This is one of the weirder things about human attraction, and the ideas behind its discovery shaped how we understand mating and sex. It turns out that, on a subliminal level, men and women can actually detect ovulating women (who are more likely to conceive if they have sex), and find them more attractive — in scent, sound, and looks — during that period of their cycle.

It makes perfect sense from an evolutionary perspective, but it’s still not totally clear how it happens. One famous study found that men rated the smell of ovulating women's sweat as sweeter and more attractive than that of non-ovulating ones. Another paired photographs and voice recordings of women across their menstrual cycles and showed them to dudes — who, again, rated the ones who were ovulating as complete knockouts.

A study published in Science found something very interesting indeed: Females blush more during ovulation, but not in a way that anybody could see or pick up on. It's basically a signal that nobody can see. How oddly useless is that?

It turns out that during ovulation, skin redness changes. Not surprising, considering that a bright red bottom is a sign of ovulation in the baboon family. But the change is so subtle, so much more refined than that M.A.C. rouge you spent far too much on, that the human eye isn't delicate enough to detect it. Women are literally sending out red flags that are invisible to the naked eye. (Your body temperature goes up during ovulation as well, so it's likely a tiny byproduct of that.)

3. You Become More Sniffable To Dogs

Not only does a women’s smell become more obvious to humans of the opposite sex, but other animals are curious about it too — and they're probably far more conscious of what it means. It's usually women on their periods who are asked to avoid things like diving with sharks, but ovulation itself is also attractive, particularly to dogs.

Dogs are exceptionally sensitive to female ovary smells: it's been proven that they can actually smell out ovarian cancer at a phenomenally early stage. With that in mind, it's pretty unsurprising that they can also detect ovulation itself, and tend to do a lot more of their crotch-sniffing behavior during that period. Head straight between the legs. Yay!

4. You Groom Yourself More

Fertility isn't just about how you smell or look to others; it's how you treat yourself. A study from 2006 showed that during the fertile phase of ovulation, women groom themselves more carefully and spent more time selecting clothes. It's what's called, fancily, ornamentation behavior, and it makes sense — there's an evolutionary reason for women to ornament themselves more carefully when their bodies are ready to be impregnated.

5. Your Partner May Get More Possessive Of You

The same study also noted that the propensity to put freakum dresses on as you approach ovulation is matched by what's called "retention behavior" in your partner — otherwise known as trying to keep your mate by whatever means possible. As women get all sexy and ornamented, their partners get all angsty and want them to stick around, possibly because they're picking up on the signals the women are putting out ("Want Baby, Takers Required").

6. Your Sense Of Smell May Get Better

A few of the fertility signals of ovulation seem pretty straightforward. For example, your voice gets a little higher in response to hormonal shifts, and your hips sway more while you're walking — both “sexy” signs. But your sense of smell also sharpens when you’re at your fertile peak. What’s up with that? A study in 2013 revealed that women who are fertile may have a sharper sense of smell, not only for musky, male-centric scents (think Old Spice and man sweat), but for scents in general. It's not necessarily the case across the board, but it looks like for some women, the act of going into Baby Mode triggers a heightened awareness of the world around them.

7. You Have A Higher Sex Drive

Ovulation can really rev up your yearning to hit the sheets, and it’s thanks to your ovarian hormones telling your brain it’s time to start the process of conception. “People may have a heightened desire and arousal coincident with heightened probability of conception around ovulation,” Jacobson says. “Ovarian hormones are thought to modulate these shifts in sex drive.” While sore boobs or cramping might also tip you off when you’re ovulating, wanting to jump your partner’s bones all of a sudden could also be a noticeable sign.

This article was originally published on July 13, 2015