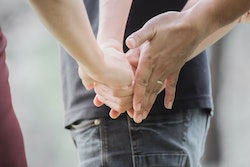 Q: How many people actually have threesomes with their partner?

Like all studies on sexual behavior, these statistics shouldn’t be taken as the hard and only truth. It’s notoriously hard to collect great data on sexual behaviors because it’s difficult to get people to talk about their sex lives — and the people who are willing to talk about it are often the people who are doing it more. (For example, a 2018 survey conducted by the website DatingAdvice.com found that just over half of gay Americans had participated in a threesome, which is significantly higher than Dr. Lehmiller’s findings.) But by looking at a couple of different sources, we can get a decent sense of how many people are actually doing it with multiple people.

So, what’s with the mismatch between fantasy and reality? Why are so many people interested in threesomes, but relatively few people actually have them? Dr. Britney Blair, PsyD, CBSM, AASECT, a clinical psychologist, sex therapist, and founder of the sexual wellness app Lover, tells Bustle that it may come down to fear of the complications another person might bring.

"While we may fantasize about having a third sex partner, bringing this to life may feel like a threat to the relationship," Dr. Blair says. "Maybe we worry our partner will like them more, that there will be drama, or that we will be left for this new and exciting person. Maybe it triggers jealousy, which is a universal emotion."

Additionally, despite an increased cultural awareness of the fact that monogamy isn’t easy — and many people, of all genders, are pretty bad at it — sex outside of a monogamous commitment is still considered to be a “morally bankrupt” act by many.