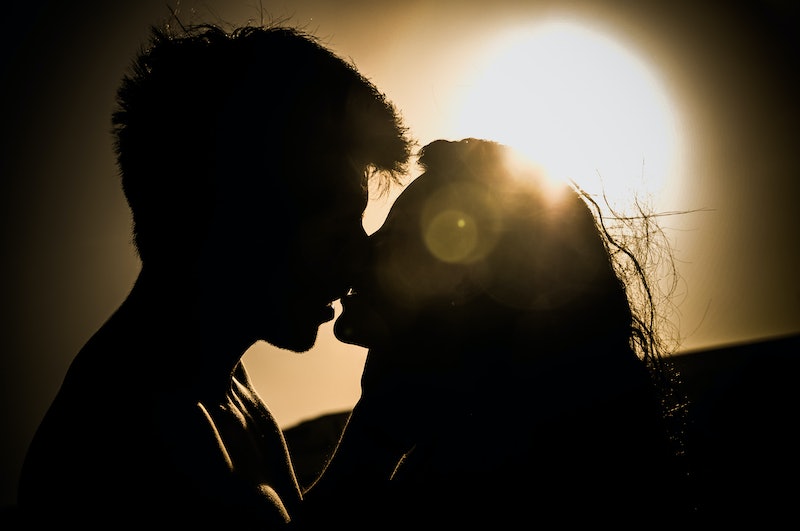 Most young women are raised with certain ideas about the way that heterosexual relationships develop: girl meets boy. They fall in love; girl immediately wants to commit and begins counting down to the day when she can reasonably drag boy to the altar. After some protestations, boy finally commits — but spends the rest of their relationship controlling his urge to chase every skirt within physical or digital reach. Girl, on the other hand, remains happily fulfilled by her commitment to one boy. These ideas are everywhere — in movies, TV shows, books, and articles about dating — but they're also often presented to us as the truth by our parents and family.

Growing up, I found myself constantly fed this party line about monogamy by all the significant adults in my life: it’s what women want (and should want) and it’s what men run from (naturally). Most of us are force fed the idea that we’re biologically predisposed to want to mate for life — and most cultures, including both of mine (American and Indian) push one marriage to one spouse forever as the ideal.

This narrative can be hurtful for everyone, but for women, the story is particularly vitriolic. After all, if the accepted idea is that men don’t want to be monogamous and women do, the automatic result is often for women to be seen as both Sirens and Harpies — luring men to their certain emotional death on the altar of monogamy and snatching any semblance of manhood they may have left.

And as a minority female, I was fed the “what women want” story in duplicate by the romances I was exposed to as a kid: American media emphasizes female loyalty and male restlessness, but Bollywood, too, idealizes a picture-perfect, lifelong, sexually exclusive romance.

I was confused: equality for women was progressing at a breakneck pace in my lifetime; I grew up being told I could do and be anything I wanted and that my choices would be respected. My parents and teachers and mentors told me that women could, for the first time in history, now create exactly the life they wanted for themselves.

The exception, though, was in my relationships: I was still supposed to "want" to be happily, traditionally, monogamously ever after.

Non-monogamy, for me, is a feminist choice. It's exactly what I've decided I want for myself. It has nothing to do with how I'm told I "should" feel in relationships: it has everything to do with what works for me.

The same parents and teachers and mentors who told me I could do whatever I wanted also acted appalled when I began to question the logic of monogamy in my mid-twenties. I once had a mentor tell me he knew for certain open relationships never worked. Another time, a very close older friend told me my desire for freedom was immature and that sooner or later, I would "settle down."

I knew I didn’t enjoy being in traditional relationships; I would enter into one and immediately feel bound and suffocated. According to the stories I grew up with, I supposed to feel happy — thrilled, even — to have "locked a man down" into a relationship. But instead, I just felt locked down myself; unhappily tied to a boxed-in, sexually exclusive relationship.

At first, I thought the solution was to stay out of relationships completely. But over time, I began thinking that non-monogamy might be worth considering. It was a slow exposure to the idea starting with an article I read online and culminating in hours-worth of personal research on Reddit and other forum sites. There were people making non-monogamous relationships work all over the world — why couldn't I?

Over time, I stopped buying the Hollywood & Bollywood story in favor of one I was slowly writing myself.

“Non-monogamy” is generally defined as a relationship in which sexual exclusivity is not a component of the bond between the partners. There will be love and laughter and romance, but the partners are free to maintain and seek out sexual (and sometimes emotional) connections with others. Non-monogamy can take the form of open relationships or polyamory or any other non-traditional relationship structure in which sexual exclusivity is not considered a necessity.

As a woman who had finally figured out that a traditionally committed relationship wasn't going to be the one for me, I realized I had finally started to feel free. But then, a glitch: people in my life treated me like I had no idea what was best for me. Since I've been open about my belief in non-monogamy, I've had some of the worst, most invalidating conversations in my life.

"You'll change your mind when you find the one."

"You just haven't been in a happy relationship yet."

"Women can't have sex for fun like men can."

"You just think you want an open relationship because you've been told that men cheat."

"Men are the ones that want sex. Women just want love. Wait 'til you get older — you'll see."

These comments haven't just come from people close to me, like close friends or family. While those are hurtful enough, even complete strangers have had the gall to tell me that I wasn't smart enough to know what I actually wanted. Once, in Manhattan, a lady on a bus overhead me talking to a friend about how I didn't want a sexually exclusive romance and scoffed, leaning over to tell me, "All that changes when you get older."

These comments weren't just cruel and demeaning; they undercut the tenets of my personal feminist beliefs. For me, non-monogamy was about loosening the reigns on the expectation that I would have to be sexually exclusive, yes, but it wasn’t just about that: it was about thinking critically about what I truly wanted out of life and making a thoughtful, reasoned, well-informed decision for myself by myself. To me, that's what feminism is.

I didn’t feel like non-monogamy was feeding into a misogynistic line of thinking that played up a man’s need for freedom while ignoring my own; it felt like I was discarding what the world had told me thus far about what women should want out of a relationship and instead, writing my own rules. That is, to me, the very definition of feminism: women finally being at the place where they can decide for themselves what they want.

Once, in Manhattan, a lady on a bus overhead me talking to a friend about how I didn't want a sexually exclusive romance and scoffed, leaning over to tell me, "All that changes when you get older."

Realizing there is more to my relationships than just sex gave me a sense of partnership self-discovery. I enjoy the autonomy of being free and open to experiences. I enjoy the deep, true, unadulterated connection that I experience while being honest with my partner about everything I want — including other sexual relationships.

Yes — in my non-monogamous relationship, my partner is “permitted” to engage in several simultaneous sexual bonds. But so, then, so am I — and to me, any structure that allows a woman to choose exactly what she wants should be seen as progress for feminism.

That's why non-monogamy, for me, is a feminist choice. It's exactly what I've decided I want for myself. It has nothing to do with how I'm told I "should" feel in relationships: it has everything to do with what works for me.