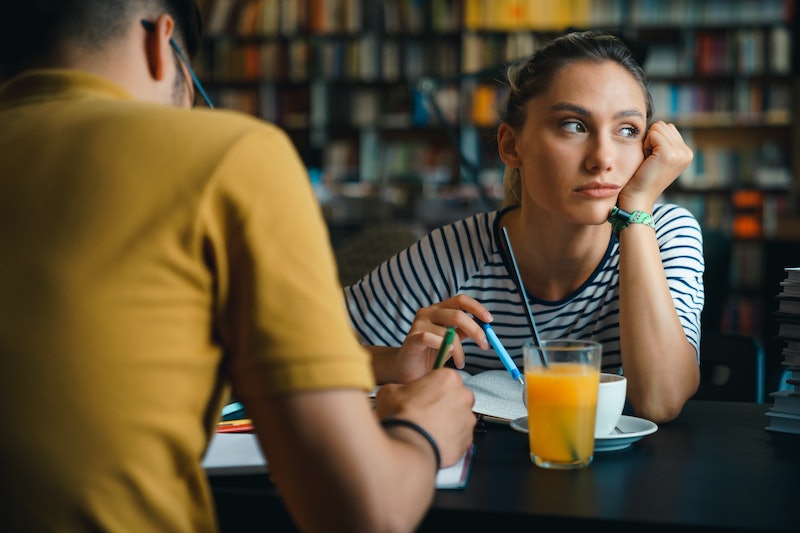 When Chelsea Horton started dating her now-husband, she was plagued by a relentless sense of doubt despite the fact that, by all accounts, things were going swimmingly. “It’s like my mind was looking for problems, obsessing over them, and then I would feel this sense of panic that I was doing something wrong,” she says. While she didn’t know it at the time, Horton’s nagging feelings were a classic sign of relationship OCD, a subtype of obsessive-compulsive disorder.

Kiyomi LaFleur had a similar experience with relationship doubts that felt “debilitating” when she and her husband fell out of their honeymoon phase — obsessing over where the feelings had gone and if he was “the one.” For six years, she had moments when she felt she could manage these obsessions, and moments when she had panic attacks and found it difficult to function day-to-day. When she graduated college and was faced with her thoughts head-on, she knew she had to seek help — something she had avoided for fear that she would be told to leave her partner.

Eventually, both Horton and LaFleur found out they were suffering from ROCD, and both went on to found coaching programs to help people like them — Healing Embodied for Horton, and Awaken Into Love for LaFleur.

So what is ROCD, exactly? “Relationship OCD is the obsessive preoccupation with the ‘rightness’ of a significant relationship,” says Davida Vaughn, education specialist, licensed professional counselor, and director at NOCD. “This can be a preoccupation with the relationship itself or with perceived flaws of a significant other. A person with relationship OCD will feel anxiety, sadness, or distress when obsessions are present, and respond to those feelings with certain compulsive behaviors.” These compulsions are intended to alleviate the anxiety, but keep the person trapped in a cycle that leaves them feeling worse.

So, What’s The Difference Between ROCD And “Normal” Relationship Concerns?

Jazzmin Johnson was five years into her relationship when anxiety hit, and she sought out therapy — but when her therapist floated the idea that she might need to “find herself,” Johnson began to spiral. “A few hours later, I remember a thought popping into my head of ‘What if you do need to find yourself? What if you need to leave your boyfriend to find yourself?’” she says. Johnson didn’t want to leave her relationship, but she couldn’t shake the thought that she might have to. Doubt turned into obsession, which turned into a compulsive search for certainty, which in turn kept her stuck in the obsessive-compulsive cycle. Soon, Johnson’s therapist diagnosed her with OCD.

Everyone will experience relationship doubts at some point, but most people can either brush off a concern or decide to move on — without experiencing total emotional upheaval. “ROCD is present when one's distress pertaining to the relationship uncertainty is hurting the relationship and causing interference with the sufferer's well-being or social or occupational functioning,” says Elliot Kaminetzky, Ph.D., founder and licensed psychologist at My OCD Care.

ROCD is characterized by persistent, unwanted thoughts that “stick,” causing the person to turn them over and over in their mind, even if the thoughts are “exaggerated, unrealistic, or contradictory to their values or feelings about the relationship,” says Jenna Feldman, Psy.D., a licensed clinical psychologist. “As a result, there is a strong urge to get rid of or neutralize the thoughts each time they occur.”

Jamie Walshner’s relationship obsessions included distressing thoughts like, “What if he's not the one?” and “What if I don't love him at all?” In an attempt to neutralize these thoughts, Walshner fell into a series of compulsions, including “breakup urges, googling, checking feelings that weren't there, crying, and trying to search for answers for months on end.” Of course, none of this helped her actually find those answers.

Relationship OCD can happen in any partnership — regardless of how well it’s going. “Often people with ROCD are having doubts and concerns even in a relationship that is overall quite good,” says Michael Wheaton, Ph.D., assistant professor of psychology at Barnard College. “It is just that even in good relationships there will of course be disagreements, moments where you are not aligned, and times where your interests aren't exactly compatible.”

How ROCD Compares To OCD

ROCD is OCD. As such, it shares many of the features from other subtypes, and people with ROCD can often develop other forms of OCD as well. According to Wheaton, there may be a genetic component that makes someone more likely to develop OCD.

Significant relationship decisions — like getting married or moving in together — can trigger the onset of ROCD, and people with certain thinking styles are more prone to developing it, Feldman says. “People with ROCD often have a catastrophic fear of regret,” she says. She adds that perfectionism may play a role as well, and that “intolerance of uncertainty” is one of the most prominent characteristics of people with ROCD.

ROCD is typically treated in the same way as other subtypes of OCD, through therapy and sometimes SSRI medication. “In terms of therapy for OCD, exposure and response prevention (ERP) is considered the gold standard treatment,” Feldman says. ERP consists of exposing the person to triggers — such as a video of a breakup or a happy couple on Instagram — and guiding them in not resorting to compulsions. The purpose of this treatment is “to decrease the amount of anxiety triggered by obsessions and increase the person’s ability to tolerate anxiety.” If you suspect you have ROCD, you should seek out a therapist trained in ERP for a formal assessment.

ROCD differs from other types of OCD in terms of the misguided beliefs that often underlie it. Kaminetzky says many of his clients think of relationships in very black-and-white terms, feeling like they need to be “absolutely certain” about the relationship in order to fully invest in it, or that relationship quality is something fixed, rather than something fluid with cycles of ups and downs.

In her Awaken Into Love program, LaFleur refers to “Honey-wood” standards, or the idealized portrayal of love in Hollywood, which tends to be permanently rooted in the blissful honeymoon phase. For Johnson, the Eat Pray Love narrative fueled the idea she needed to leave her relationship to find herself, while others compare their relationships to those seen in The Notebook or Pretty Woman, for example.

Dealing With ROCD In Long-Term Relationships

ROCD is chronic, meaning that it can’t be “cured,” but it can be managed effectively — and you can still enjoy a harmonious, thriving relationship. And although ROCD can present in unsatisfying relationships that potentially aren’t a great fit, it’s worth noting that Horton, LaFleur, Johnson, and Walshner are all still happily coupled up with their partners.

The experience of ROCD can be lonely, so finding a supportive community can help a lot, too — Walshner has built hers in part through Instagram, while Johnson created a YouTube channel and podcast. Both LaFleur and Horton moderate Facebook groups where their clients can support one another.

Johnson says her ROCD-related thoughts are much more fleeting these days thanks to therapy and SSRIs. “So much of my healing through ROCD has relied on learning about relationships as a whole,” she says. “The biggest takeaway I’ve [had] is that every single relationship looks completely different and is completely different. There is no comparison — with anything. Two unique people, one unique relationship.”

Kiyomi LaFleur, ROCD expert and founder of Awaken Into Love