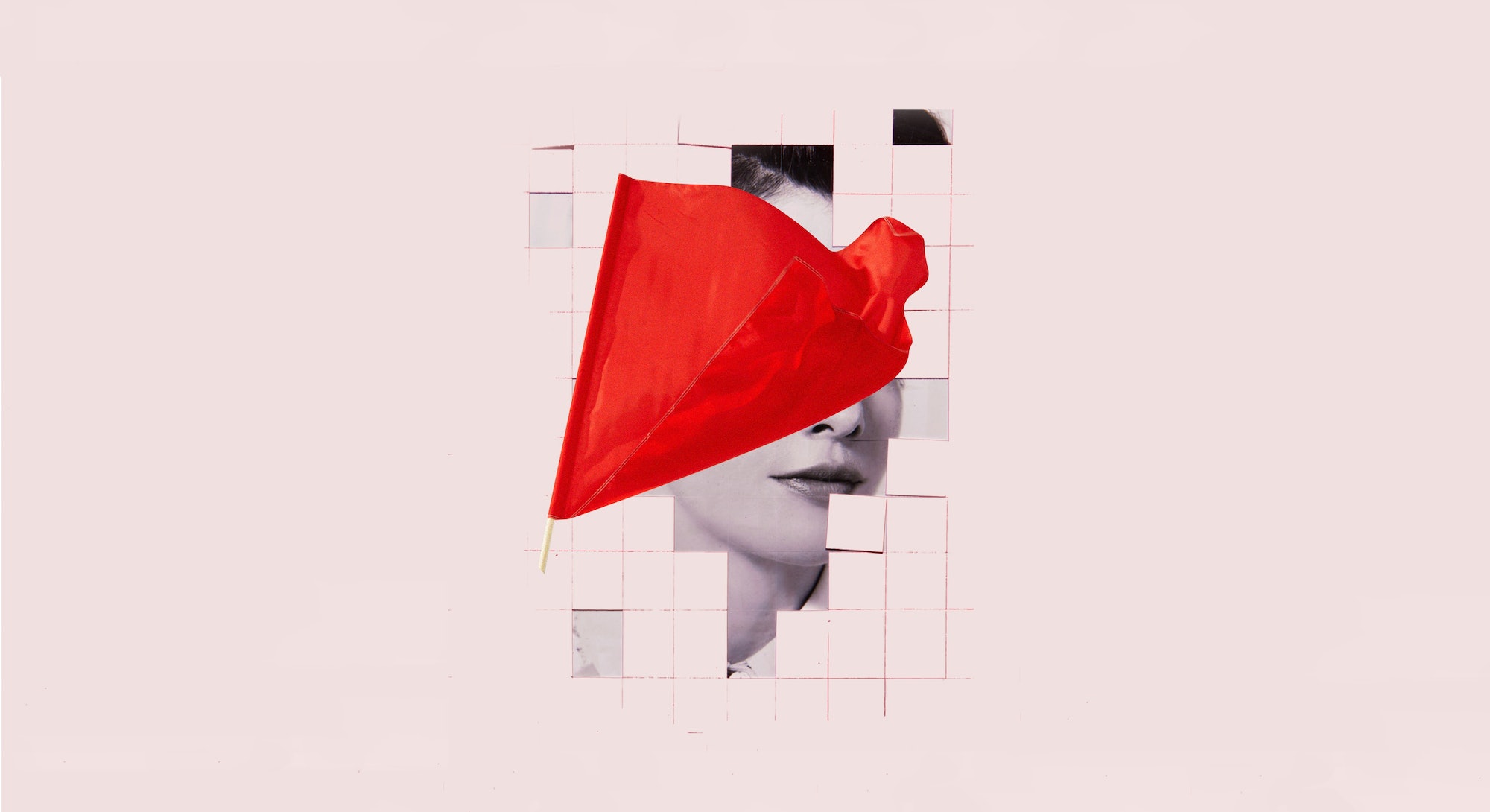 Andy Ryan,Tara Moore/Getty Images
How To Get Married

In no particular order, a list of things that the chorus of the internet has deemed a red flag in a romantic relationship: not having a headboard; owning a copy of Infinite Jest; not liking Mac Miller; not liking Beyoncé (that one may be real); loving Stanley Kubrick’s films; liking any film too much at all; being a fan of Radiohead; specifically, listening to “Creep” by Radiohead; thinking that owning crystals is a red flag; hating horror movies; hating Shrek.

The list could go on forever. But you get the gist; any and everything has the potential to be a red flag, or a reason to run for cover and avoid dating someone, based on some likely anodyne aspect of their personality. At this point, there are so many possible red flags to watch out for that calling red flags has become a meme itself. Like most things that go through the wash and rinse cycle of internet discourse, there’s a semi-viral tweet that sums up the whole phenomenon: “Huge red flag when a guy has favourite books or movies or whatever.”

How did we get here? It could be that we’re at this cultural apex of therapeutic literacy, something Jessica Worthington, a relationship therapist in Austin, Texas, calls a “double-edged sword.” Increased visibility around mental health and healthy relationship patterns (good) has led to more and more people feeling comfortable doing armchair diagnoses on potential partners (not good), Worthington says. Also, there’s personal experience, which can cause false correlations. For example: Dating one guy in college who didn’t have a bed frame and who also gaslit the sh*t out of you can lead a person to believe that all guys without bed frames are gaslighters. Is that necessarily true? No, but sometimes it’s easier to shut down a romantic prospect than it is to face potential pain. Hence the identification of a red flag.

It takes time to figure out which quirks are little, and which are much bigger parts of their personality.

“I think it’s easy to make associations with our experiences, right?” says Worthington. “It’s not coming from a place of malice, but it’s likely you just don’t have all the information you need. Like the bed frame thing — maybe he is just super frugal, or spending all his money on his family.”

The early stage of a relationship — when someone is most likely to pick up on a potential red flag — is also the information-gathering stage. When you first meet someone, you know very little about them, so little quirks, like a Radiohead poster on the wall or a well-worn copy of Infinite Jest on the nightstand, seem like huge pieces of information. It takes time to figure out which quirks are little, and which are much bigger parts of their personality.

“His favorite movie was Red Dawn. Something about how it shows how all Americans should be prepared for a Communist invasion?”

“When we first went out, he mentioned that his mother bought him new sheets,” says Maria Diaz, 34, who asked to use a pseudonym to protect her ex’s privacy. “We started dating a bit more seriously, and I realized it’s not just new sheets — it’s everything. He wouldn’t even buy new pillows for his bed without asking his mother’s opinion.”

Diaz adds that she initially wondered, Red flag?, when first confronted with her then-partner’s proclivity for running everything past mom, but she ignored it, hoping to pursue a relationship anyway. And pursue a relationship she did; the two eventually moved in together. Months into cohabitating, though, and he still hadn’t kicked his habit; Diaz said he even continued asking his mother to do his laundry. The two eventually broke up, and Diaz points to the mom-behavior as a major reason why.

Melanie Wannamaker, 29, similarly ignored something she thought might be a red flag early on in a relationship.

“He was a cop who didn’t like flying because he couldn’t carry his gun on the plane,” she says. “And, less of a red flag, but still true: His favorite movie was Red Dawn. Something about how it shows how all Americans should be prepared for a Communist invasion? Anyway, turns out he was a gun-nut Libertarian who I dated for three months too long. One of our final arguments was over seatbelt laws, and whether the government should require driver’s licenses to drive. He disagreed with both. My friends still make fun of me about it.”

“We would go out and he would buy drinks, but then he would do a weird thing: Request me for, like, $3.14 for a movie we rented.”

As Diaz and Wannamaker’s experiences show, being able to identify a legitimate red flag — or listening to that little gut feeling that something is off — is helpful. But the over-pathologization of red flags can sometimes go too far, ending possibly great relationships before they ever take off.

Shelby Bohannon, 26, says she also noticed a red flag in the early days of her relationship, one that perhaps all of us have confronted at one point or another: The guy always sent extremely exact Venmo requests.

“When we first started dating, I was in college and he was out of college, and had like, you know, a big-boy job,” says Bohannon. “We would go out and he would buy drinks, but then he would do a weird thing: Request me for, like, $3.14 for a movie we rented. It was one of those things where I couldn’t tell if he was being cheap, because he was really generous in other ways.”

Bohannon says the specificity of the requests — like that added 14 cents, instead of rounding to the nearest dollar — gave her pause; why nickel-and-dime someone you’re trying to impress? But, in time, she learned more about him, got used to it, and accepted it as an anodyne personality quirk. The two eventually got married, and the persnickety Venmoing suddenly stopped, now that everything is, essentially, shared. They’re still together, red flags and all.

“I was like, What’s the deal with this, what’s going on in here?” And, to be fair, he had a very reasonable answer.”

Like Bohannon, Alison Herman, 28, spotted a possible red flag early on in her relationship. “My boyfriend’s room looked like a barren monk’s cell when we started dating,” she says.

Herman says they met on Hinge, and when she walked into his room, she immediately noticed the guy had no art on his walls, whatsoever: “It was literally a bed, a nightstand, and a single bookshelf, but nothing aesthetic or decorative, or, you know, any signifiers of a personality.”

Herman brought it up the second time she came over. (For what it’s worth, Worthington says this is the best way to address a potential red flag: directly and kindly.) “I was like, What’s the deal with this, what’s going on in here?” says Herman. “And, to be fair, he had a very reasonable answer. He only used his room for sleeping and it helped with his insomnia. As I’ve gotten to know him more, I understand why his room looked the way it did.” Their first date was back in summer 2019, and Herman and her boyfriend are still together.

Had Herman and Bohannon heeded the red flags and stopped in their tracks, their relationships never would’ve happened. So perhaps there is something to be said for oversensitivity; or maybe it’s just that one woman’s red flag is another woman’s ideal relationship (if that’s not a little too Carrie Bradshaw to say). Whatever the case, maybe take a page from Herman’s book and confront a flag, rather than immediately shying away from it. Besides, as she mentions, sometimes the person with the red flag is you.

“I am the person in my relationship who’s read Infinite Jest,” says Herman. “So, sometimes, I think the red flags are incorrectly gendered.”