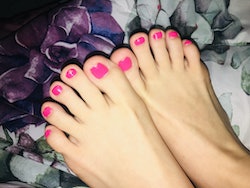 In this week's Sex IDK column, Emma McGowan, certified sex educator and writer, answers your questions about how to get rid of fetishes.

Let’s start with the basics: What is a fetish? According to Merriam Webster, a fetish is “an object or bodily part whose real or fantasied presence is psychologically necessary for sexual gratification.” In other words, it’s an object or body part that someone needs around in order to get off. Often — but not always — a fetish is something that the majority of people don’t find sexual. For example, someone might be really into cooking spatulas for spanking. On the flip side, lots of people fetishize more traditionally “sexy” items, like stockings, corsets, shoes, etc.

When it comes to sexual desires, fetishes are often considered to be “fringe,” “abnormal,” or even “weird,” despite the fact that they’re actually more common than not. (Some surveys of sexual behavior even suggest that a high majority of people have at least one fetish.) Hello, sex-negative culture!

Here's the deal: There’s absolutely nothing wrong with a sexual fetish. (With the caveat, of course, that everyone involved is a consenting adult, and no one is unwillingly hurt.) Are you going to understand everyone’s fetish? Probably not. Are you going to be turned on by everyone’s fetish? Nope. But unless you’re having sex with that person, it really doesn’t affect you. And who are you to deny someone their best orgasms?

There’s also no way to “get rid” of a fetish, despite what some forums will tell you. The current science states that fetishes are usually developed in childhood and are an innate part of a person’s sexuality. Similar to sexual orientation, it’s not something that can be changed.

But, Reader, I understand that you — like all of us — live in a sex-negative culture. And sex-negative culture says that fetishes are weird or creepy or whatever shaming adjective you want to add. So, what are you supposed to do with these fetishes that are causing you distress?

The first thing I suggest is that you try reframing how you think about your fetishes. You can start this process on your own by really asking yourself: What’s actually wrong with this desire? Does it being uncommon make it bad? Am I hurting anyone? Could I find a community of other people who are into this fetish? Could this fetish actually be adding something cool and interesting to my life?

Reframing harmful narratives that we’ve been fed our whole lives is really, really hard. So, luckily, there’s a whole group of professionals who can help: Therapists! Find a sex-positive therapist and start working with them to accept this part of yourself. A good place to start is the American Association of Sexuality Educators, Counselors, and Trainers (AASECT). If you choose to find one elsewhere, just be sure that they’re sex-positive. There are therapists out there who believe that people can get rid of their fetishes, but be wary of that approach — most sex-positive therapists consider it unethical.

More like this
How Do I Deal With Both ED & Premature Ejaculation?
By Sophia Benoit
Are Quality Time & Physical Touch Love Languages Compatible?
By Lexi Inks
I Never Orgasm During Sex. What Can I Do?
By Sophia Benoit
7 Women Share Their Best Orgasm Stories
By Lexi Inks
Get Even More From Bustle — Sign Up For The Newsletter