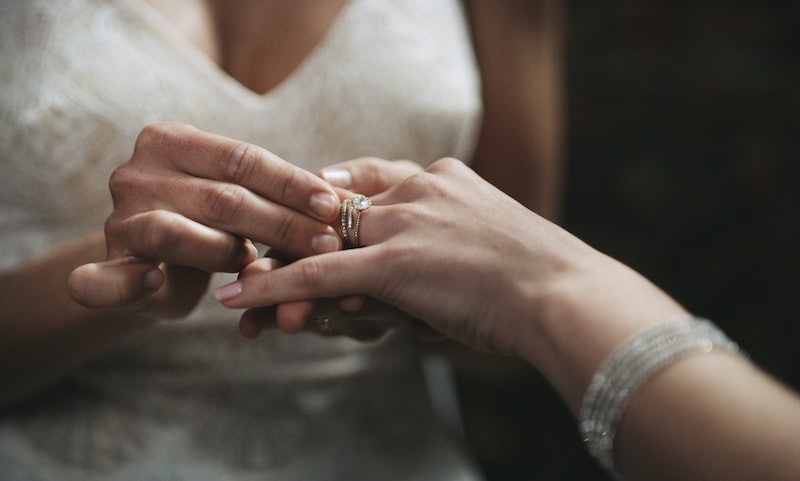 Same-sex religious marriages can now take place in Northern Ireland from the end of the month. As of September 1, same-sex couples wishing to be married in a religious institution can begin registering to do so. But, as there's a statutory 28-day waiting period following the introduction legislation, the actual ceremonies of those applying won't take place until Sept 29, 2020.

It comes over a year after the House of Commons voted 383—73 in favour of extending same-sex marriage to Northern Ireland. Same-sex couples can apply to be married in any religious institution, however religious bodies are able to reject the applications as the legislation includes protections which mean they cannot be found to be "unlawfully discriminating against couples if they refuse to marry them," as reported by the Metro.

In a statement Patrick Corrigan, Amnesty International’s Northern Ireland Director and part of the Love Equality coalition, welcomed the legislation's introduction, saying: “This is a landmark day for equality in Northern Ireland. After a long campaign, same-sex couples of faith will finally be able to marry in a church or other religious setting."

He continued: “In line with our calls, we are pleased that the law will protect religious freedom, and that churches will neither be compelled nor prevented from offering wedding ceremonies to same-sex couples. This is an important issue for many couples in Northern Ireland, who have previously been prevented by law from marrying in their own church."

Rev Chris Hudson, minister of All Souls Church in Belfast (a member of the Non-Subscribing Church of Ireland), also shared his delight at the announcement. "This is great news for couples who wish to celebrate their marriage in church, embraced by family, friends and the love of God," he told the Metro. Adding: "I have already been speaking to a number of couples who have been waiting for this day so they can finally have the church wedding that they have longed for."

However, while the news has been welcomed by campaigners like Corrigan and ministers like Hudson, there is still work to be done, with Amnesty International calling for the government to allow same-sex couples in civil partnerships to change their partnership to a marriage.

Corrigan added in his statement: “We now urge the Government to finish the job of marriage equality in Northern Ireland without further delay, by allowing couples in civil partnerships to convert to married status if they so wish.”

Per Amnesty, the government has committed to giving the 1,200 same-sex couples currently in civil partnerships in Northern Ireland the option to convert to a marriage by the end of the year, however it has not given a specific date as to when it will be introduced.

More like this
Boris Johnson’s Leadership Is In Question – Again
By Bustle UK
GIRLI & Q Fell In Love At A Skatepark & Never Looked Back
By Jessica Morgan
The Families Of Grenfell Tower Are Still Waiting For Justice, Five Years On
By Bustle UK
5 Ways To Stand In Solidarity With Women In America From The UK
By Sophie McEvoy
Get The Very Best Of Bustle/UK