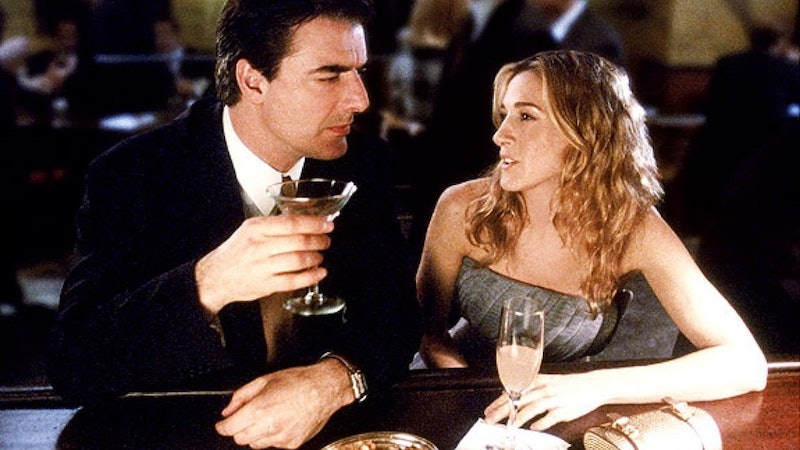 Spoilers ahead for the Sex and the City reboot And Just Like That. Like so many other young women with literary aspirations, I grew up watching the original Sex And The City, fantasizing about one day creating a life for myself analogous to Carrie Bradshaw’s glamorous Manhattan one. And just like her, I dated a man like Mr. Big who was a decade older than me, with slicked back hair to boot. Like Big, he was emotionally unavailable and would push me away every time we got “too close.” Their unhealthy relationship — and most of the others portrayed in Sex And The City, for that matter — led me to believe that the constant making up and breaking up cycle was just a standard part of being in love, and it took me a long time to learn that it wasn’t.

From the beginning of their romance, we see Bradshaw continually being emotionally abused by Big, and yet, she still hangs on to the relationship. When Big tells her that he’s going to relocate to Paris and she offers to move there with him, he just shrugs and says, “I don’t want you to uproot your life and expect anything.” He refuses to introduce Carrie to his mother, calling her his “friend,” when she confronts them together. In other words, Big consistently downplays the seriousness of their relationship to Carrie, creating a dynamic in which she’s always giving, and almost never receiving.

Their toxic, on-again off-again relationship had more downs than it had ups, conditioning a lot of women (namely, me) to believe that we need to accept a lot of bullsh*t in order to find epic love. But it wasn’t just Sex And The City positioning roller-coaster relationships like Carrie and Mr. Big’s as the pinnacle of romance.

Take also, for instance, Gossip Girl’s Chuck and Blair. Like Carrie, Blair represents a strong and independent character, but yet, we see her constantly crying over an emotionally unavailable Chuck and think, “Well, if Blair has to put up with it, so must we.” The entire first season is full of Blair trying get Chuck to admit that he loves her, but he wouldn’t. Neither would he let her go. She begs him at the bar one day to once and for all tell her if it was all a game to him and if it was, he needs to let her go and he admits that he was just playing around and she breaks down crying and leaves. That’s not the worst part though. Chuck traded Blair for a hotel and also slept with Jenny, Dan’s sister, when he assumed that Blair no longer loves him. His cruelty is never-ending.

“TV shows can portray a reality wherein a man is ambivalent about a woman, and the woman, through her perseverance, pushes a man through that ambivalence into commitment,” says licensed mental health counselor and psychotherapist Jack Worthy, specializing in relationships and dating. “Seeing an idealized, fictionalized woman encountering the same issue and deploying a strategy of, ‘try harder’ — TV shows and movies didn’t create the phenomenon, rather, they took a phenomenon and made it worse,” he says.

While it’s difficult to measure precisely, a 2012 study suggests that around 80% of people — both men and women — have experienced emotional abuse. “Unhealthy relationships we see on screen are evidence that these types of relationships exist in life, and that they are more entertaining to watch than two members of a couple interacting in a healthy manner,” says Dr. Jessica January Behr, Psy.D. licensed psychologist.

So it’s not as though shows like Sex And The City and Gossip Girl are portraying unrealistic relationships, just contributing to a romanticization and glamorization of them. We watch successful women cry, continually get hurt, and yet still refuse to give up on these men — a dedication that eventually results in eternal bliss a few seasons later as the show ends. Both Chuck and Blair and Carrie and Big end up together in the shows, and we expect the same for our lives.

“The fairy-tale ending is exploited in storytelling because it satisfies a ubiquitous desire for women (and men) to be fully accepted and to achieve and receive ultimate love. TV and movie endings display our deepest wishes and do what they are written for, [which is to]make us feel good in the end,” says Dr. Behr. In life, we often stay in unhealthy relationships because we have hope that things will get better, that one day we’ll be fully happy and loved. We see ourselves in the characters and conflicts in these shows, but also in the resolutions, Dr. Behr points out. “It is possible that repeated depictions of highly conflictual relationships ending in happily ever-after seeps into our personal and collective unconscious,” she says.

“But perseverance aimed at the wrong goal is masochism. You cannot, through perseverance, make someone love you.”

Why didn’t I give up on my own troubled relationship despite clocking many of the same red flags and manipulation tactics that plagued Carrie and Mr. Big? Because all that drama was normalized through TV shows, and I was addicted to it. “The show’s writers chose a man’s ambivalence as the obstacle between a woman and the love relationship she wants. That makes for a never ending source of drama.”

“Not giving up,” or perseverance, is a virtue in the right context, he points out. You persevere to finish medical school, land a promotion, or complete a triathlon. “But perseverance aimed at the wrong goal is masochism. You cannot, through perseverance, make someone love you.” When you offer your whole heart over and over again, and what you receive in return is at best inconsistency, frequent indifference, and at worst cruelty, you cannot help but wonder, “What is insufficient in me that my love is not returned?” It’s this act that hacks away at one’s self-esteem, says Worthy.

In the second episode of the reboot, And Just Like That, while at the funeral of (major spoiler!) Mr. Big, a woman in attendance says aloud, “Am I the only one who remembers what a pr*ck he was to Carrie?” To her I say, we remember all too vividly.

More like this
Should I Be Friends With My Ex If I'm Still Not Over Them?
By Sophia Benoit
This TikToker Has Genius Advice For Boosting Your Dating Confidence
By Lexi Inks
What Causes Clinginess In Relationships?
By Marilyn La Jeunesse
I'm 42 & I've Never Had Sex. Is It Too Late?
By Sophia Benoit
Get Even More From Bustle — Sign Up For The Newsletter