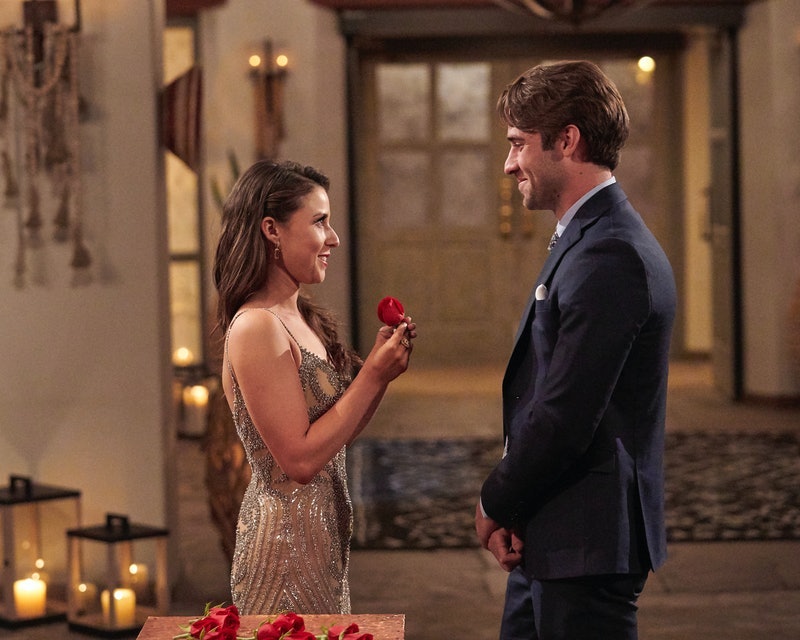 It’s really tough to spot emotional manipulation when it’s happening to you, because, well, you’re being manipulated. But if you happen to be on the outside looking in, the signs and symptoms of manipulation in relationships are often much easier to see.

Take the most recent episode of The Bachelorette, for instance. The highlight of the show was Katie Thurston’s argument with contestant Greg Grippo during their hometown date. He opened up about family, his father’s death, and how much he loves Katie. Greg admitted it was his first time sharing so much with a partner and asked her to take the opportunity to fully commit to him. When Katie hesitated, Greg got frustrated.

Later on, the two had a conversation where Greg said Katie “fills a hole in his heart.” He continued to pressure her for a response, claimed she wasn’t listening, pointed out their “disconnect,” and — while Katie sat there crying — decided to break things off. Was this a classic case of emotional manipulation? (Half of Twitter thinks so.) Or was Greg’s reaction simply miscommunication? Whatever side you fall on, The Bachelorette has started an important conversation about relationship manipulation.

According to sex and intimacy coach Leah Carey, “Emotional manipulation is trying to get a partner to behave in the way you want them to by making them feel badly about their authentic thoughts, feelings, and actions.” It often involves things like gaslighting, threats, and dramatic displays, all of which can damage your relationship — and well-being. Here, 13 other signs of emotional manipulation to watch out for, according to experts.

If you set a boundary, be wary of anyone who tries to cross it. According to Carey, when you tell a partner what you are or are not OK with, it’s up to them to either say “Cool, I can live with this” or “That’s something I can’t live with, I’ll leave.” You may be able to meet halfway on certain subjects, but it should never feel like you’re being threatened or pressured into doing so.

2. They Won’t Take No For An Answer

Take note if anyone ever says they love you but then gets upset when you don’t say it back. “A declaration of love is never a requirement for the other person to respond in kind,” Carey says. “I liken telling someone you love them to giving them a gift. Hopefully, you are giving it from a place of overflow without expecting anything in return. The expectation of a similar gift in return is commerce, and requiring it for the relationship to continue is manipulation.”

ICF-certified life coach Katie Utterback, CLC, agrees. “Manipulators don't want you to be able to weigh all the pros and cons,” she tells Bustle. “They don't want you to think things through. They want those quick, heat-of-the-moment decisions, because that's one way they gauge how much control they have over you.”

Another red flag? A manipulative person will often use dramatic statements like “I thought you of all people would understand” or “You’re the only person I’ve ever loved.” If they attempt to wheedle, cry, or shame you into changing your mind, Carey says that’s a sign of emotional manipulation.

The crying is a big one. According to Utterback, tears might flow during a tough conversation, but take note if your partner seems to be pushing them out. “Real tears produce snot, too,” she says. “Emotionally manipulative persons have crocodile tears and they can make their voice sound shaky, but it's all an act to get you to do what they want.”

Manipulation is all about control, and one of the tactics used to gain control is to take a person out of their element. Think about where you live, where you hang out, whose friends you visit, and where you go on dates. Are they all your partner's favorite spots? Does it seem like you live in your partner's life, but they don't live in yours? It’s much easier to control someone when they aren’t in comfortable surroundings.

6. They Want You To Prove Your Love

Keep an eye out for partners who are constantly testing your love, possibly by starting sentences with “If you really loved me.” It could be anything from, “If you loved me you’d do the dishes” to “If you loved me, you’d have sex with me right now.” This tactic uses guilt and emotion to prod or shame you into doing something you don’t want to, or shouldn’t have to do. It's a form of manipulation no matter how innocent it sounds.

7. They Expect You To React A Certain Way

Consider how Greg hoped Katie would help carry the burden of his childhood trauma. According to therapist Katie Ziskind, LMFT, it’s unfair to ask a new partner to be emotionally nurturing. It’s also unfair to expect anyone — long-term partner or not — to play the role of therapist. “You want to make sure that you will be emotionally nurtured, you need to work with a professional therapist, that you hire to listen to you and respond in a compassionate, nurturing way,” she says. “Greg is trying to get support from the wrong person who is not ready for commitment.”

8. They Use Emotional Blackmail

Emotional blackmail is ugly. “A partner will try to make you feel fear, obligation, or guilt for your boundaries or decisions,” Utterback says. They also might hang something over your head — like a conversation or secret you shared — as a way of scaring you into doing things their way. “All of this is a red flag.”

9. They Play The Victim

Let’s paint a scenario: You and your partner get into a fight. No matter who was in the wrong, what was said, or what actually went down, your partner is just heartbroken and “can't believe you'd hurt them like that ” — even if your partner was actually the one who did something wrong. It's a way to make you feel like you're a bad, unworthy partner — and for them to avoid taking responsibility for their own actions.

According to Rachel DeAlto, the chief dating expert at Match, gaslighting is when a person attempts to twist reality so you second-guess yourself. Their goal is to make it seem as if you misunderstood or misremembered, which “allows them to get away with something that would otherwise be inappropriate,” she tells Bustle. It’s also a weird, controlling way to get you to stay in the relationship because you’ll start to think it isn’t so bad, or that their mistreatment is “all in your head.”

When things don't go your partner's way, do they say they are sick or weak or in need of care and support? This can be actually a form of manipulation. An example: Your partner doesn't want to have a serious conversation with you so they suddenly feel faint. Since they’re “sick,” they magically get out of it.

Consider it yet another red flag if it feels like your new relationship is too good to be true, which is often the case with love bombing. “Love bombing is coming on too strong too fast without the foundation of a relationship that supports it,” DeAlto says. “They are trying to make you feel like the relationship is stronger than it is.”

This is manipulation in two parts. The first part is the one where they say hurtful things or criticize you, but it's your fault for getting upset because they were “totally just kidding.” It doesn't matter how cruel they were, it only matters that supposedly you're too sensitive and can't take a joke.

The second part involves making jokes about you in public and in front of others. If you respond negatively in front of others, you're “making a scene” or “ruining the fun.” This is a way to get for a manipulative person to get digs in and grind you down without having to take accountability.

If you aren’t sure but feel as if you’re being manipulated, you probably are. “Trust your gut,” Utterback says. “If something feels off, [...] do what feels right for you.” The more you recognize manipulative behaviors, the more you'll be able to shut them down. If you're dealing with a serious manipulator, though, you may want to begin looking for a way to end the relationship.

More like this
Bumble's "Compliments" Feature Lets You Message Before You Match
By Lexi Inks
Do I Have To Tell My Crush That I Slept With Her Ex?
By Sophia Benoit
How To Have A Hometown Hookup Without Catching Feelings
By Lexi Inks
These Are The 3 Most Mellow Zodiac Signs
By Kristine Fellizar
Get Even More From Bustle — Sign Up For The Newsletter

This article was originally published on May 24, 2016