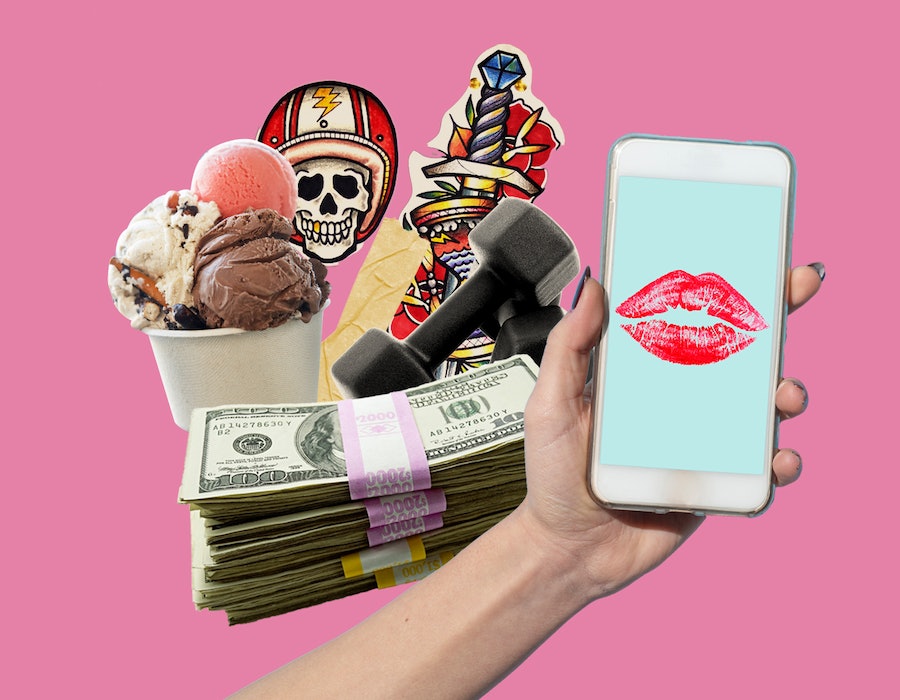 During the summer of 2020, 30-year-old Kristen Melchiorre, like many other quarantined Americans, picked up a new hobby: making ice cream. In her free time, she’d churn unique flavors — like blueberry corn crisp and chocolate peanut butter pretzel — out of her kitchen in Philadelphia, gifting them to enthusiastic family and friends who served as initial taste testers. In their feedback was the resounding notion that Melchiorre should cash in on her talents and sell her frozen confections. So she made an Instagram and dubbed her new gig Side Hustle Scoops.

Initially, Instagram was the primary driver of sales, but soon after launching, Melchiorre used her Hinge profile to tout her sweet side project, filling in prompts like “Together we can…” with “build my ice cream business together” and including Side Hustle Scoops’ IG handle. Sure enough, Melchiorre noticed her the account’s following grew after she added the link to her profile.

Ice cream, she found, was the perfect ice breaker. Many of her conversations on the app centered around the dessert — her matches’ favorite flavors, witty brainstorm sessions about which variety she should produce next, and the occasional overt come-on. “I think I got the like, ‘So can I come over and try some? ;)’ more times than I could count,” Melchiorre says.

Though she ditched the venture after about nine months (her day job as a television and podcast producer necessitated more time and energy), Melchiorre found Hinge to be an ideal medium for promoting a small business. Adding the brand’s Instagram to her profile required minimal effort and chatting with matches about her side gig allowed for an organic direct-to-consumer marketing approach. “Just speaking from a woman’s side of things, it’s nice to promote yourself,” Melchiorre says. “It's nice to show that you have a lot going on, it shows that you hustle, it shows that you're driven. The type of partner I want to attract respects that and would comment on that being one [my] most attractive qualities.”

Just as Instagram handles in bios have become pervasive as a means of personal brand promotion on dating apps, singles are utilizing dating sites to advertise other aspects of their lives — namely, their small businesses. They shill for their real estate companies and sunglasses brands, personal training services and startups. Some even attempt to recruit for multilevel marketing companies on dating apps.

On Tinder, the use of the word “entrepreneur” in bios increased by 25% between April 2020 and July 2021, according to a survey by Shopify and Tinder. Taking advantage of the localized nature of dating apps, compared to the international networks on Instagram or TikTok, entrepreneurs are able to mount small-scale advertising efforts to the audience most likely to frequent their storefront or fitness center. As the hustle economy turned hobbies into marketable personality traits, people are turning to alternate avenues in order to succeed financially, romantically, or both.

Dating apps’ turn toward professional promotion isn’t altogether surprising or novel. Digital platforms often morph to include unintended uses beyond their initial focus. Facebook Marketplace and Buy Nothing groups facilitate the exchange of goods locally; Instagram now offers a way to turn one’s life into a marketable commodity. Seemingly in response to a deluge of daters looking to network on apps, Bumble and Tinder created career-focused hubs in Bumble Bizz and Tinder Explore, which lets users interact exclusively with others who want to talk shop. With entrepreneurs using dating apps to drum up business, the line between work and leisure is continually blurred.

Although dating apps give small business owners the ability to advertise their services to a wide swath of locals, some singles see the practice as misleading for daters who are on the apps to find love. “If I’m on Tinder, I’m not looking for a weekly personal training session,” says 31-year-old Rasika Thapa. “It’s dates that I’m keen on and building a connection.”

In Dubai, where she lives, personal trainers frequently promote their gyms on dating apps, Thapa says, which results in an immediate swipe left. If conversations with matches naturally turn toward career stuff, she doesn’t mind, but she tries to avoid anyone who seems to be promoting their professional work. This comes after she accidentally matched with one such small business advertiser. “It was just shop talk, no actual conversion or interest in getting to know [me],” she says.

Similarly, 31-year-old writer and filmmaker Daniel Hess has noticed more singles on dating apps near Baltimore, where he lives, not outright promoting their businesses, but instead encouraging the continuation of the conversation on Instagram, which is solely dedicated to their side hustle or job, he says. After matching with a woman who worked at a salon who encouraged Hess to follow her on Instagram, he noticed she constantly posted about work and the conversation fizzled. Now, he tries to keep his dating app conversations solely on the app or through text messages. “I'm not really upset as much as I am disappointed, really,” Hess says. “Some people I meet and I feel like we could really vibe or connect, but then it all just becomes business-related stuff.” It’s depressing, he says.

On Tinder, using a dating to promote a business isn’t a ban-able offense. It is against Tinder’s terms and conditions, however, to include a link in a profile that navigates out of the app, per a Tinder spokesperson. But, if a user connected their business Instagram account to their Tinder profile, forthat’s fair game.

According to Hinge and Bumble’s terms and conditions, users cannot share content “relating to commercial activities.” According to a Bumble spokesperson, commercial activities include links to Venmo, Paypal, CashApp, solicitation to join an MLM or "network marketing" groups, links to OnlyFans, ManyVids, Patreon, or any platform where a transaction is required for participation, and solicitation of products or services of any kind. (Hinge did not respond to a request for comment.) While Melchiorre wasn’t banned from Hinge for promoting Side Hustle Scoops, she was eventually booted from the app when she used it to source podcast guests for work.

Abrielle Fox isn’t worried about being barred from the apps where she promotes her tattooing business. Despite just recently getting out of a relationship, the 23-year-old didn’t make Tinder and Hinge accounts to date, but to find more clients. One of her Hinge prompts reads “Would you let me tattoo you?”

In the few weeks she’s used the apps for business, Fox has gained a few new clients — all men, though she swipes on both men and women — tattooing them in her Winnipeg apartment. She finds setting non-romantic boundaries with her matches, despite meeting on a dating site, one of the greatest challenges. One client insisted on calling their session a date, she says. Some matches have gone so far as to call the practice illegal and “morally wrong.” “I think that dating apps should be for anything you want them to be,” Fox says, “meeting new people, making connections.”

But when capitalism and consumption filter into matters of the heart, these efforts of connection can feel disingenuous. For someone who has a sincere interest in a match to discover they’re actually being sold a service, the already fraught act of dating can lose even more appeal.

Ever since Shreya, who asked not to share her last name, joined Bumble last March, the 26-year-old has seen singles near Pune, India, where she lives, promote their dance classes, fitness services, and hair products; one guy advertising the latter messaged Shreya to ask her to write online reviews for hair products she’d never used. She’s never gone on a date with a self-promoter because she believes mixing business with pleasure is a recipe for trouble.

“Please use the platform for the purpose it is designed for,” Shreya says. “We don't go around going for a date on LinkedIn. Don't use a dating app to network.”

More like this
18 Hinge Prompt Answers To Try If You’re Looking For Something Casual
By Lexi Inks
My Partner Wants Me To Wear A Diaper During Sex. Help!
By Sophia Benoit
12 Active Date Ideas That'll Get You & Your Boo Outside
By Lexi Inks
TikTok's Voluntary Celibacy Trend Has Sparked A Movement
By Lexi Inks
Get Even More From Bustle — Sign Up For The Newsletter
From hair trends to relationship advice, our daily newsletter has everything you need to sound like a person who’s on TikTok, even if you aren’t.