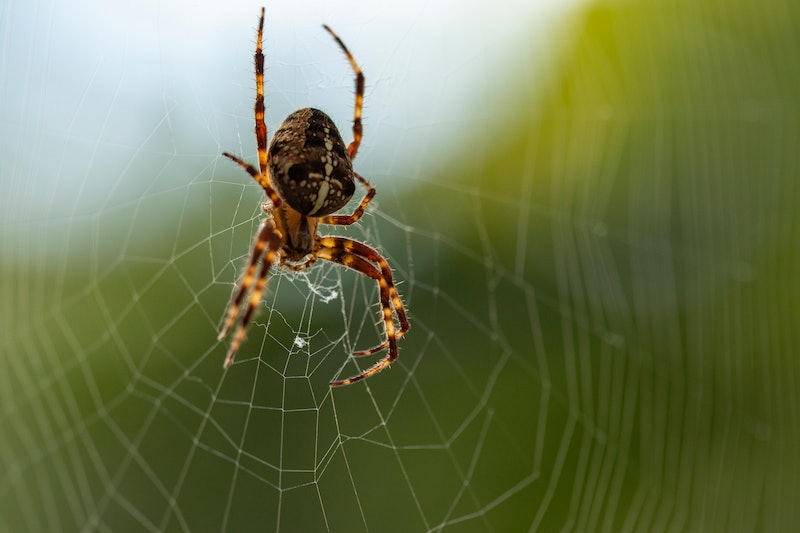 Though they're gross to look at and startling to encounter in the shower, spiders are no threat to us in our waking lives. (Well, unless they’re lethally poisonous, but those are rare.) So why are so many of us dealing with scary spider dreams as soon as we close our eyes? Likewise, most of us have never encountered a wolf outside of a zoo, and may have actively campaigned for their habitats and safety — so why do our dreams so often turn us into our prehistoric ancestors, being pursued across the savannah by a pack of hungry, toothy gray beasts?

Read more: What Do Dreams About Cats Mean? Here's What Experts Say

When it comes to nightmares, cause and effect are hard to establish. “Nightmares can be isolated and triggered by a multitude of external stimuli,” Sherese Ezelle, LMHC, a mental healthcare provider with One Medical, tells Bustle. But she does have one recommendation. “Avoid watching scary or troubling movies or shows close to bedtime.”

Our wildest animal dreams are certainly impacted by TV and films about terrifying animals (turn off the David Attenborough before bed, people). But many people believe that they're about something deeper than the last weird film you caught on cable. Some researchers theorize that our DNA has conditioned us to fear wild animals that were a danger to early human beings, so when we dream of predators, we’re priming ourselves to fight them in real life. There’s also some evidence that nightmares help people emotionally regulate their fears in their waking hours. Interestingly, people who experience anxiety in waking life tend to dream more about animals than those without anxiety, according to a 2020 study in Dreaming.

But what does it mean when you dream about spiders, or bats, or wolves, or other freaky creatures? Below, doctors and dream analysts help us make sense of animal-related nightmares.

What Do Dreams About Spiders Mean?

“Nightmares about specific animals can signal fear,” Ezelle says. “For example, you may have a fear of dirt and associate the crawling of a spider on the ground as being dirty if they touch you.” In that case, spiders are dipping into your own fears — though, Ezelle says, it’s not necessarily a sign that you have arachnophobia. “There is no concrete connection between nightmares and phobias,” she says.

“Spiders often point to deceit, a web of lies that are bugging you,” dream analyst Lauri Quinn Loewenberg tells Bustle. Spiders in dreams can indicate emotional distance — either you're feeling like an outsider, you're purposely keeping a certain temptation at arm's length, or you're protecting yourself from your own urges towards self-destruction. A spider can also symbolize creativity — if you see a spider spinning a web in a dream, it may mean that you've completed a difficult task, and are expecting to be rewarded.

What Do Dreams About Insects Mean?

Have you been swatting a lot of flies lately? Research published in Patterns in 2021 indicates that doing something repetitive in real life is a good way to make sure it finds its way into your dreams. According to a 2014 study, insects feature in around 5% of nightmares, so you’re not alone.

“These dreams most likely indicate something or someone in your real life is agitating or "bugging" you,” Loewenberg says. “The bigger the bug, or the more bugs there are, the bigger the issue it is to you.” Alternately, those organized little buggers might mean that you're trying to mentally organize or sort through your thoughts, like a team of ants building a new colony. “A bug infestation in a dream can be a warning from your subconscious that some negative issue is starting to overwhelm you,” Loewenberg says.

What Do Dreams About Snakes Mean?

One of humanity's most loaded and potent symbols, having one of these legless wonders sidle up to you in your dreams can mean all sorts of things — both positive and negative, with the final meaning determined by your own feelings towards your dream snake.

“Snakes are a very common creature that slithers into our scary dreams and can represent a toxic person in your life, someone that exhibits low down, dirty behavior,” Loewenberg says. Happy to see it slither up? That could mean that you're getting in touch with your own creativity, healing some aspect of your inner self, or embarking on some personal transformation (particularly if the snake is shedding its skin).

What Do Dreams About Wolves Mean?

Though a dream of being chased by wolves suggests that you're running from a problem present during your waking hours, a dream where you just see a wolf chillin' can carry both positive or negative significance. “Wolves are often the bad guy in the stories we grew up with, so they can represent someone in your life you need to be wary of,” Loewenerg says. But a dream where you admire a wolf can symbolize your own inner reserves of the wolf-like qualities of resourcefulness, self-confidence, pride, and capacity for solitude.

What Do Dreams About Sharks Mean?

A dream with sharks in it may point to more than a traumatic childhood viewing of Jaws. “Any sort of creature that is known for its large mouth and sharp teeth will most often represent someone in your life that has recently directed sharp criticism and biting remarks towards you,” Loewenberg says. Spying a shark on the shores of your dreams can mean either that you are in the middle of a difficult emotional transition, and may be feeling anger, hostility, and fierceness; or that you are struggling with issues of greed and unscrupulousness, either within yourself, or in the form of another person causing stress in your life.

What Do Dreams About Alligators & Crocodiles Mean?

No, alligators and crocodiles are not the same animal. But try telling that to your subconscious, OK? Your dreaming mind is way too busy running away from these rampaging reptiles. Being chased by either creature usually signifies a refusal to face a painful or troubling situation head on, while simply encountering an alligator or crocodile in a dream can mean that there is hidden danger in your life that your conscious self is trying to avoid — or hidden strength within you that you have yet to really tap. “The predatory nature of the creature and what they are typically known for can also play a role in the meaning for you,” Loewenberg says.

What Do Dreams About Bats Mean?

Dreaming of literal bats in your belfry can mean that you're feeling unhinged or annoyed. They can also symbolize uncritically entering into a new association, job, or relationship, or even ignoring your own potential — you have the ability to do something you dream of, but you're not on the right path, and need to accept and make room for your own personal growth.

What Do Dreams About Rabid Dogs Mean?

“Dogs usually symbolize a relationship in your life, one where there should be friendship and loyalty,” Loewenberg says. “If the dog in your dream is rabid, you need to ask yourself which relationship has become unhealthy.” Similarly, slaying a rabid dog signifies overcoming those same emotional attacks from people whom you trusted.

What Do Dreams About Lions Mean?

Lions stand for courage, strength, and power in our dreams. Just like in The Lion King! Spotting one majestically strutting across the grass can symbolize your need to be in control of others, or your capacity to emotionally triumph over the problems you are currently dealing with. However, if Scar tries to eat your face (or any ol' lion attacks you), it may mean that you're feeling compelled to engage in some self-destructive behavior.

What Do Dreams About Panthers Mean?

Once again, the meaning of the panther in your particular dream depends on how you feel about the panther in question. Digging its beauty? Then it symbolizes your inner power and grace, or your own spiritual or emotional rebirth. So terrified of it that you dream-poop your dream-pants? In that case, the panther may represent hidden danger in your waking life, and folks who wish you misfortune. “As with any creature, person or object in a dream, ask yourself what first comes to mind when thinking of that creature,” Loewenberg says. “Then apply that to yourself as well as to the people currently in your life.”

What Do Dreams About Tigers Mean?

Tigers spotted on the astral plane represent power — and seeing one might be a sign that you need to exert more of your own. But if a tiger attacks you, you may have some repressed emotions you've been to afraid to deal with. If you spot a tiger in a cage, those same repressed emotions may be rising to the surface, and will come out soon. Grrrrr.

What Do Dreams About Rats Mean?

When the rats come out to feast on the garbage of your dream life, it might be time to look at your own behavior: these furry foragers can signify inner turmoil relating to greed, guilt, self-doubt, and shame over your own actions, or even repulsion about something in your life. “A rat is known to infest filthy homes and alleys. We also tend to call people "a dirty rat" when they are doing shady things and acting "dirty". Who in your life would also fit that description?” Loewenberg says. Catching a rat with your bare hands in a dream signifies the undeniably positive fact that you're triumphing over these feelings; but even though it's positive, I still can't guarantee that you won't wake up screaming from that one.

More like this
5 Signs You Have A Toxic Relationship With Yourself
By Lexi Inks
Why We Love Investigating Friendship Breakups
By Carolyn Steber
Bonnie Milligan's Wellness Routine, From Daily Journaling To Drugstore Teas
By Jessica Derschowitz
The Crab Walk Exercise Improves Your Posture & Overall Strength
By Carolyn Steber
Get Even More From Bustle — Sign Up For The Newsletter
From hair trends to relationship advice, our daily newsletter has everything you need to sound like a person who’s on TikTok, even if you aren’t.

This article was originally published on Feb. 20, 2015