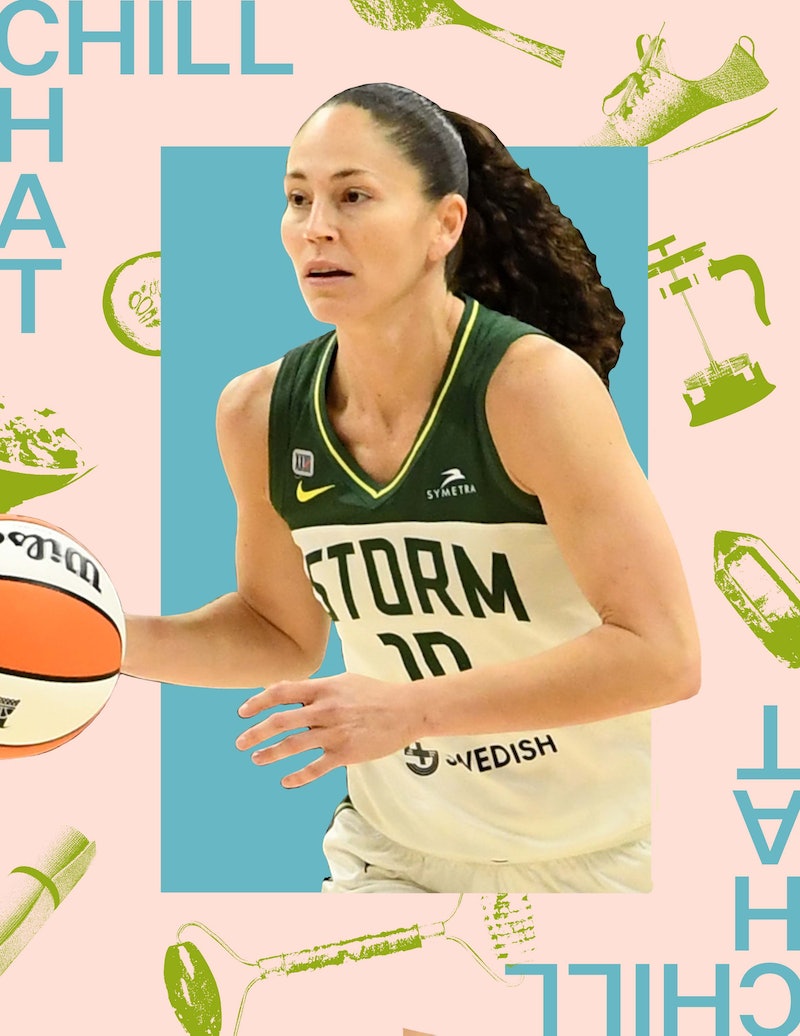 In Chill Chat, Bustle sits down with stars to chat about all things wellness, from their workout playlists to their most reliable self-care hacks. This week, Sue Bird talks about her CBD regimen and those retirement rumors.

Sue Bird has never lost a basketball game at the Olympics, and she never will. In July, the point guard announced her retirement from the Olympic stage after Team USA defeated Japan in the final matchup, making her all-time record at the games 38-0 and earning Bird her fifth gold medal. Now, with five golds apiece, she and teammate Diana Taurasi hold the most of any basketballers in the history of the sport.

Naturally, the Seattle Storm team captain is considered one of the best. LeBron James sings her praises. Earlier this year, ESPN writer Katie Barnes called her “one of the greatest point guards to ever pick up a basketball.” And in June, she became the first WNBA player to crack 3,000 career assists. So how does she sustain that high level?

“When I’m out of the season, it’s a good time to stretch myself out of my comfort zone,” says Bird, who’s fresh off of the final game of her 18th season, which ended with an 85-80 overtime loss to the Phoenix Mercury in the playoffs. “I’m down to try new ways to look at my nutrition, workout regimen, and recovery.”

Bird, who turned 41 this month, takes care of her body through alternating ice and hot baths and NormaTec, a dynamic compression system designed to increase blood flow. For her mental health, she’s partial to meditation. She also uses CBD regularly, which helps her sleep and soothes occasional aches and pains.

This past summer, she became a face of Mendi, a sports-focused CBD company, alongside her fiancée, American soccer star Megan Rapinoe. (Mendi is run in part by Rapinoe’s sister, Rachael.) “It was a no-brainer for Megan and I to be part of the company, because we were already big believers [in CBD],” says Bird, who met Megan at the 2016 Olympic Games in Rio de Janeiro. Together, they’ve been involved in product development at the brand. Bird, for example, is the brains behind its Mendi Salve Stick, an all-natural hemp-derived product that glides over areas in need of some CBD TLC.

Both CBD and THC come from cannabis plants and are used to treat issues like chronic pain, anxiety, and insomnia, but only the latter is known for its psychoactive effects. (In other words, no, CBD likely won’t get you “high.”) In late 2017, the World Anti-Doping Agency (WADA) announced the removal of CBD from the banned substances list, a decision that went into effect in 2018, thereby allowing Olympic athletes to use it. But THC is still a banned substance.

Bird’s welcome reception into the cannabinoid industry doesn’t extend to everyone, which was made clear in July, when track and field star Sha’Carri Richardson was banned from the Olympics after THC was found in her system. Bird, who is pushing for THC to be allowed for pro athletes, was quick to show her support for Richardson on Twitter, writing: “Let Sha’Carri run.”

Below, she talks with Bustle about Richardson, possible retirement, and her time in Tokyo.

“I can tell you 100%, I wouldn’t put something in my body unless I believed it was good for me.”

How do you use CBD on a regular basis?

CBD is a big part of my regimen. It’s a wonderful sleep aid. I have trouble staying asleep. Those witching hours will get me, like the 3 a.m. wake-up. All of a sudden, you’re up for an hour. I find that CBD really helps with that. And usually, when it comes to random aches and pains, I also see results. My knee is my Achilles’ heel. I’ll throw some CBD on as needed, and usually use the Mendi Salve Stick for that.

What initially piqued your interest in CBD products?

Megan and I started getting into it a little bit, trying it out. At the time, it was still considered illegal [for] the drug testing we both have to go through. Once it was removed from those lists, that opened it up more for us. And that’s around the time when Megan’s sister, Rachael, started Mendi.

What was the process of making a CBD regimen like for you?

I was really lucky in that I have access to team doctors, and I work with a dietician. These are people who I trust, people who are doing the research. They gave me the green light. And, as an athlete, I can tell you 100%, I wouldn’t put something in my body unless I believed it was good for me.

Cannabis products with higher volumes of THC are legal in Washington state, which is where you’re based. Do you use THC in addition to CBD products?

Oh yeah, absolutely. I’m lucky to live in a state where it’s legal. A high percentage of how I like to use products like CBD or THC is for sleep. I like how it chills me out, calms me down, and then allows me to fall asleep and stay asleep. That’s a majority of my usage.

Heading into the Olympics, Sha’Carri Richardson was barred from the games after cannabis was found in her system. What are your thoughts on what happened to her?

Personally, I think [cannabis] will eventually come off the banned substances list. What’s unfortunate is that someone like Sha’Carri had to suffer. It’s just awful. It seems that the way our world works these days is that there has to be one person who suffers for things to change. Hopefully one day, she’s back on that Olympic stage competing. And hopefully, when they take THC off, she’ll know she played the biggest role in it.

Speaking of the Olympics, a lot of things were different about the games this year in response to the coronavirus pandemic. How did the different protocols affect your routines and well-being?

For the basketball team, we were actually in the hotel. We weren’t in the village, which had its pros and cons. It was a controlled environment, so I never felt I was at risk for a COVID infection. But that was also a con. There wasn’t much to do. We had areas designated for us, where we could hang out, watch TV, play cards, have music on, and have snacks. But we really couldn’t leave. [That’s] where the self-care part kicked in: trying to find a balance of feeling cooped up but also understanding you’re safe. For me, that’s really been this entire pandemic experience. I say this from a place of privilege, but anytime I found myself feeling cooped up, scared, or nervous, I would just rest in the place of, “You’re safe.”

While you’ve retired from the Olympics, you haven’t announced a decision about retirement from basketball altogether.

I’m still deciding. Our season only ended about a week ago, and I want to be well-removed from it, because it can be an emotional decision if [I’m] caught up in it. To be honest, because we had just lost, there was part of me that was like, “Oh man, I’m definitely coming back!” Then a couple days went by, and I was like, “I should think about it more.”

I feel really lucky that this decision will be based on what I think is best for me. It’s not my body deciding. As an athlete, there’s not much more I can ask for.

You and your partner Megan are both prominent faces of the Mendi campaign. How do you hold each other accountable when it comes to wellness?

We’re lucky that our goals are similar. We want to be in peak condition, playing at high levels. There are definitely days where one of us doesn’t feel like [sticking to the routine]. And the other one is just like, “Come on, let’s do it.” Sometimes you need nudges, and it switches back and forth. When it comes to food, I’m the one that’s more on it. If she had it her way, we’d be eating whatever whenever. [Laughs.] But we’re really lucky to have each other, because being an elite athlete requires a lot of discipline, especially in the later stages of your career. I’m probably at the latest, but Megan’s creeping up. When you’re 35 and up, you really have to focus. That’s what helps you stay at a high level.

Is there anything about your self-care routine as a whole that might be surprising?

I like to remind people that yes, if you’re in this life, you’re incredibly disciplined. It’s 80/20. I’m on it 80% of the time, and then 20% I’m gonna have a piece of pizza and some ice cream, cause I feel like it, and I deserve it. People need to know there’s a balance.