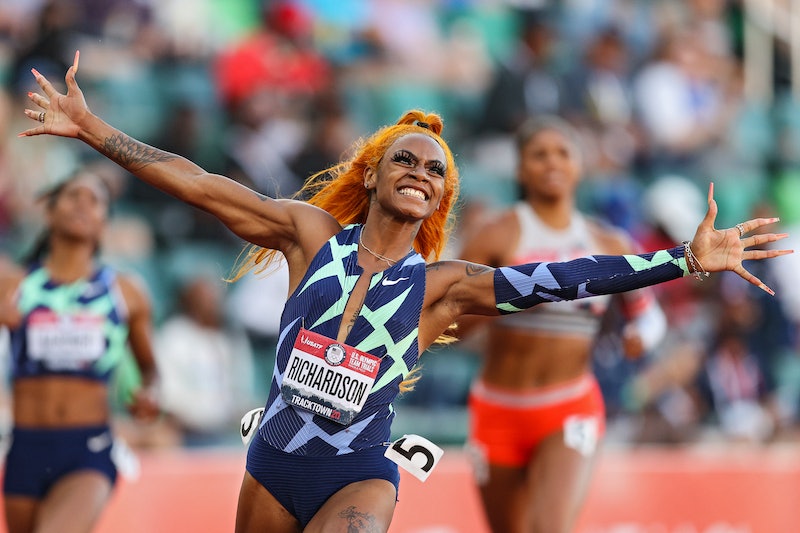 This year’s 2021 Tokyo Olympic Trials have introduced many viral moments, including a surprising appearance from Miley Cyrus’ former beau Cody Simpson finishing last in the 100-meter butterfly final. On a much more exciting note, avid sports fans added Sha’Carri Richardson’s astounding 100-meter dash to the list. The 21-year-old track and field star qualified for a chance to win Olympic gold, thanks to her 10.86-seconds run at the Olympic trials in June. Not only did Richardson come in first at dizzying speed, but she did so in style, sporting “full lace, lashes, and nails” on Juneteenth.

Of course, Richardson’s career started long before earning her spot on the U.S. Olympic Team ahead of the Tokyo Olympics opening on July 23. Judging from her impressive athletic skills, Richardson appears poised for future viral moments. However, her Olympic dreams appear to have been completed dashed since testing positive for marijuana. Richardson accepted a one-month suspension from competing in the 100-meter individual event, but according to ESPN, she’s also now barred from running in the 4x100 relays. As a result, the dynamic sprinter will unfortunately not compete during this year’s Olympics; her name was noticeably left off of the USA Track and Field team roster list.

Even with Richardson's confirmed absence from the Olympics, attention must be paid to learning more about the rising phenom’s outstanding career thus far.

Sha’Carri Richardson hails from Dallas, Texas — “South Dallas, raised in Oak Cliff,” to be exact. Oh, and she’s considered the “fastest girl” in the entire Lone Star state. Before making national history at the Olympic Trials, the five-foot-one-inch sprinter turned heads with winning championships throughout middle and high school. Per D Magazine, she won the Texas State Championships in the 100-meter as a high school sophomore, and it was then that she was dubbed the “fastest girl in Texas.”

While she’s a Texas girl, Richardson attended Louisiana State University to hone her sprinting abilities. This proved fruitful as she racked up win after win, including being honored with the school’s prestigious Bowerman award in 2019. She told The Advocate at the time, “It feels rewarding knowing that my hard work has paid off. I started running at a very young age. I’ve had to make sacrifices, and my success came, of course, at a young age, but it shows that the work you put in is better than anything that you go through. Because the hurt is temporary. Reward and success is forever.”

Richardson’s speed isn’t the only thing catching attention from sports fans. Her vibrant hair color speaks volumes, and she changes it frequently to fit her mood. She explained to the OC Register that her hair is meant “to stand out so I am visible and able to be seen.” That makes sense considering how hard it must be to follow her speeding through the track.

Richardson added that her girlfriend chose the bright orange hairstyle she famously wore the day of her Trials qualifier victory on June 19. As reported by the outlet, she said, “My girlfriend picked this color because it’s loud and, honestly, dangerous. She said you need to look the best and be the best.” A quick scroll through Richardson’s Instagram shows just how stunning her personal style is.

There’s a lot riding on Richardson’s first-ever Olympics, which sadly will not happen this year. As one of the fastest women in the nation, she was initially set to compete in the 100-meter in Tokyo. It’s been 25 years since an American woman has won the event at the Olympics. The last to do so was Gail Devers in 1996. Before her suspension, Richardson was prepared for the challenging task at hand, stating that being an Olympian was “always the ultimate goal.”

Now, Richardson will miss the Games completely after The United States Anti-Doping Agency announced she had tested positive for marijuana, which is against Olympic rules. According to the New York Times, the athlete accepted a one-month suspension that started on June 28, meaning she will no longer be eligible to compete in the 100-meter race. Her one-month suspension would have ended just in time for Richardson to participate in the 4x100 meter relay race, but she didn’t make the U.S. team.

In a July 2 interview on TODAY, Richardson apologized for her actions and said she was committed to healing herself first and foremost. “I want to take responsibility for my actions,” she said. “I know what I did, I know what I'm supposed to do... and I still made that decision.” The runner explained that her biological mother’s death in the week before Olympic trials — and the fact that she found out the news from a reporter — played into her decision. "People don’t understand what it’s like to have to… go in front of the world and put on a face and hide my pain,” she said. Richardson ended her interview by making a simple plea to viewers. “Don’t judge me because I am human,” she said. “I’m you. I just happen to run a little faster.”

More like this
Ciarán Griffiths Is Making His 'Corrie' Comeback
By Catharina Cheung
Ellen Pompeo Says Goodbye To 'Grey’s Anatomy' In An Emotional Instagram Post
By Grace Wehniainen
'Doctor Who's New Companion Has Been Winning Acting Awards Since She Was 18
By Shahed Ezaydi
Who Is Pete Davidson Dating? He "Courted" Emily Ratajkowski At A Knicks Game
By Jake Viswanath
Get Even More From Bustle — Sign Up For The Newsletter