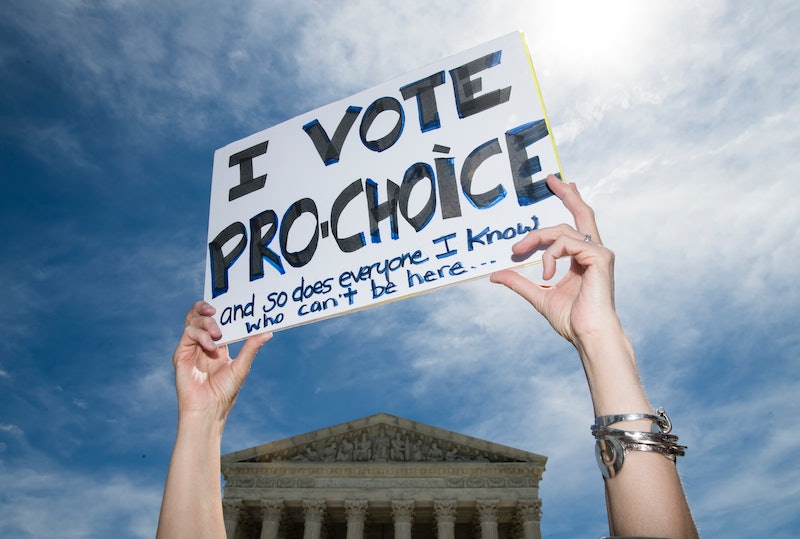 On Saturday, June 20 at 12:30 a.m., Tennessee state legislature passed a bill banning all abortion after a “fetal heartbeat” — technically, just electrical activity, since a fetus’ heart hasn’t yet developed — can be detected, which is usually at six weeks gestational age. The bill, which was immediately put on hold thanks to legal challenges from Planned Parenthood, the ACLU, and others, also bans the procedure if the doctor knows that the patient wants to terminate because of the fetus’ sex or race, or a diagnosis of Down syndrome. There are no exceptions for cases of rape or incest, and minors in custody of the Department of Children’s Services would also lose their right this procedure. Further, the ban would make performing an abortion in any of these scenarios a Class C felony, and because of how the bill was written, if it’s struck down, bans at eight, 10, 12, 15, 18, 20, 21, 22, 23, and 24 weeks gestation will be triggered. The current legal standard is that abortion may only be banned at the point of fetal viability outside the womb — around 24 to 28 weeks gestation — making Tennessee’s sweeping ban law one of the most radical attempts to limit access to abortion nationwide.

Dr. Kim Looney, M.D., the chief medical officer of Planned Parenthood of Tennessee and North Mississippi, tells Bustle what this bill means for her and her patients, and what she wants lawmakers in her state and those seeking abortions in Tennessee to know.

As a physician, I take this new bill really personally. It takes away my rights to advocate for my patients and to do my job — to help them make medical decisions in their best interest.

Passing this bill in the middle of the night feels like it was done so they could not have to deal with the other side of the issue, which is that many people feel that this bill is unjust. When you pass bills in the middle of the night, people can’t show up and say something about it. You’re already taking a woman’s voice away by taking away her ability to make decisions about her own body, and this is just an extension of that.

For people who are now finding out about the bill, it’s causing a pandemonium. Patients are flooding our phone line trying to see if their appointment is still there. People are coming in from other states that currently have even more restrictions than Tennessee does, like Alabama and Mississippi, to get an appointment as quickly as they can.

Lawmakers can understand economic freedom, but can’t understand someone wanting autonomy over their own body?

There’s this thinking that a woman who is disconnected from her pregnancy is more likely to terminate, but I think it’s anything but that. Those who get abortions are very connected to their pregnancies; they just don’t feel that it’s the right decision for themselves right then. If someone is genuinely not ready to be a parent, there are usually cultural, financial, and emotional stressors that come along with that decision. You don’t know what kind of irrevocable harm you may be doing when you force a person into parenthood before they are ready. We have a segment of society who get to make decisions about their own bodies and health, and a segment of society who do not get to make those decisions. And those segments divide by gender and socioeconomic lines.

Look at what happened with COVID — people were protesting because they thought their rights were being violated because they couldn’t leave their house. It felt like the government supported and understood them. But a person can’t feel violated when you trample on their rights to their own person? Lawmakers can understand economic freedom, but can’t understand someone wanting autonomy over their own body?

I feel that the people who write these laws are those who are least affected by them. A relationship between a physician and her patient is sacred. My ability to do my job as a physician and serve my patients should not be restricted by someone who has no understanding of the medical challenges these bans cause and the implications they have for my patients.

What I want the patients of Tennessee to know is that there are people advocating for you. We know the fight is not over. We know the fight will be hard. We know there are parts of the fight we’re not looking forward to. But it’s come to the point where even the quietest of champions for women’s rights can’t be quiet. I don’t like being on the forefront of this battle. But I am at a point in my career where I can no longer be quiet.