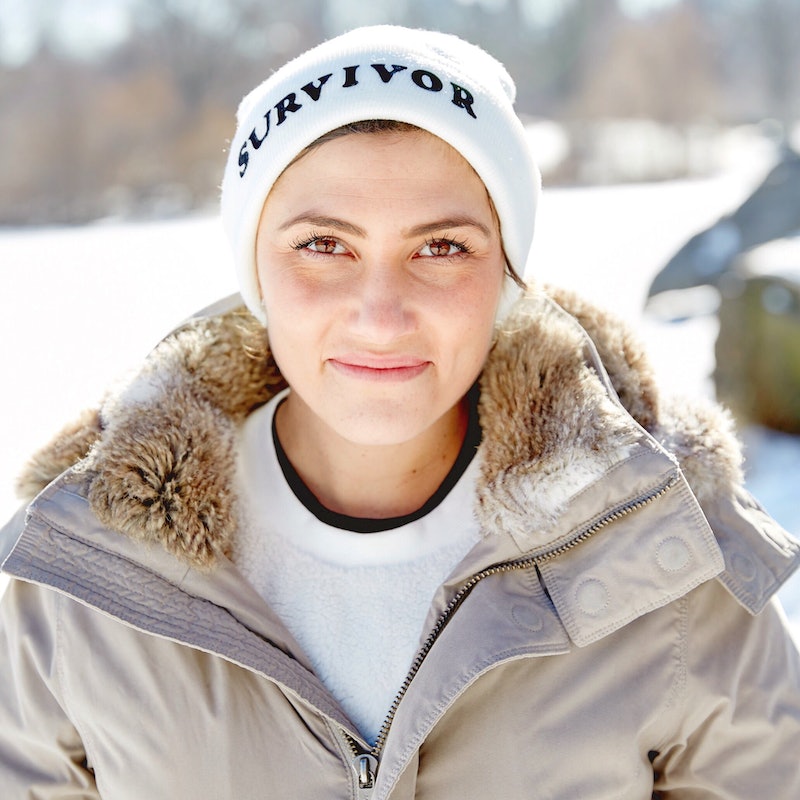 In this as-told-to, Allie Brudner, co-founder of The Breasties, a non-profit organization that supports young women who've been affected by breast and ovarian cancer, tells Bustle writer Eden Lichterman what it was like to get diagnosed with breast cancer at 28, and how she's been coping since.

In October 2016, I was preparing for my wedding. I scheduled my regular doctor appointments, like the gynecologist and dentist, before the big day. At the gynecologist, my doctor gave me a clean bill of health. She mentioned I had dense breast tissue, but assured me it was normal and sent me on my way.

About a week later, I felt this palpable lump in my left breast. I had a moment of panic, but I told myself, “You’re a hypochondriac. You were just at the doctor, and she said it’s dense breast tissue.” I felt the other breast, and to my relief, it was a little lumpy too. My husband and a few friends confirmed that both breasts felt the same, and I was probably fine.

So, I proceeded as usual. I got married. I felt good. After the wedding, around mid-November, I got my period, and the lump hurt a little bit. It had gotten bigger, more defined, and rounder. I thought this was weird, and I should tell my doctor. I went back to the gynecologist about a week later. She said she thought it was probably just a fibroadenoma, which is a benign breast tumor. At my request, she wrote me a prescription for an ultrasound and a biopsy, but she told me to keep the biopsy prescription in my purse unless the radiologist asked for it, which I found strange. The radiologist I saw the next day did the ultrasound, but wanted a biopsy as well to be sure.

Many anxiety-filled days passed before I got my results. On Jan. 3, I was sitting in a meeting at work when I got the call. The radiologist said, “The good news is that we saw another thing, and that’s just a fibroadenoma. But the main mass is malignant. You have cancer.” There was no, “Are you sitting down? Are you with someone?” He just straight up told me I had cancer. At 28 years old, my whole world changed.

At this point I didn’t know if it was “you’re dying cancer” or “no big deal cancer.” My gynecologist called me in a state of panic. She went on about how I was young and the cancer was aggressive. I was like, “Holy hell lady. Can you just call my mother? I don’t know how to tell her.” A few days later, I found out that it was stage two, triple negative breast cancer. I also found out that I was a carrier of the BRCA1 mutation, which I didn’t know because it hadn’t presented itself in my family. My dad passed the gene to me.

My treatment started with a two-week fertility preservation process. My husband and I knew we wanted children down the line, and chemotherapy can hurt your chances of getting pregnant naturally. A month after I began the fertility preservation process, I went through eight rounds of chemotherapy. I lost my hair, I lost my libido, I gained weight, and I felt physically sick. I also had a double mastectomy with reconstruction, radiation, and six months of oral chemotherapy. Luckily, I could take a medical leave of absence from my work as a child speech pathologist during my treatment, and Sloan Kettering covered most of my medical bills.

No one understands what you’re going through like other people dealing with their own life-changing diagnoses.

In May 2017, my doctors declared that I had no more evidence of disease. I have physically been in the clear ever since, but I’m still working to mentally recover from the experience. When you’re slapped in the face with a cancer diagnosis at 28, there's no guarantee that you'll make it to the other side. When I was going through treatment, I was comforted by the fact that my doctors monitored my every symptom to make sure I was getting better. Once the treatment was over, however, there was no one checking up on me every day anymore.

It’s hard to find the balance between not worrying about every sensation, but also being on alert for symptoms that could indicate a relapse. I don’t feel completely safe in my own body. Meditation, exercise, and eating healthy have helped me regain some sense of safety. I’m also fortunate to have a community through The Breasties. No one understands what you’re going through like other people dealing with their own life-changing diagnoses.

I’ve reached a point where I’m grateful. Although cancer has brought me darkness, it has also brought me connections with amazing people. When I was diagnosed, I felt like the only young person with the disease — only around 5% of breast cancer cases occur in women under 40 years old. I would check in at the doctor's office, and the receptionist would ask me for the patient's name. I would respond, "I am the damn patient. Not my mom, not my grandma. It's me."

I believe that everything happens for a reason. Now that I’m physically healthy, my husband and I are ready to go through IVF and expand our family. We're going to test our embryos for the BRCA mutation and only use ones that don’t have it. Maybe my diagnosis happened to prevent future generations from going through this. What I do know is that the pattern of mutation in my family will end here. I’ll make sure of it.