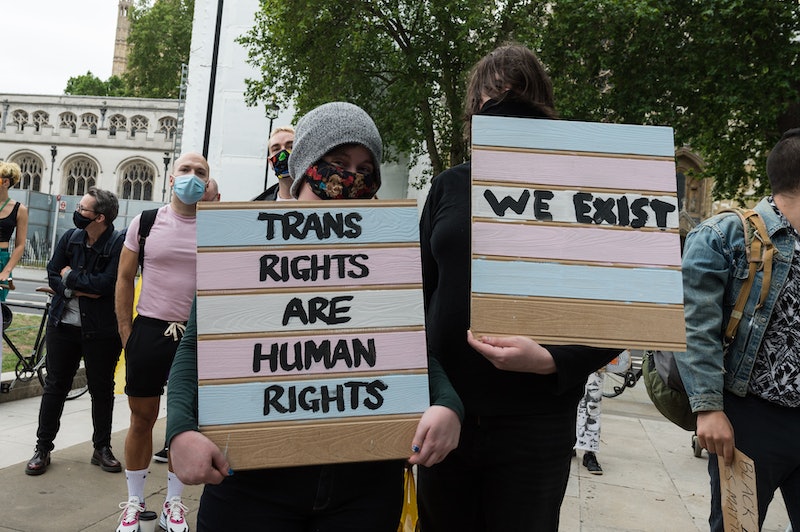 The government has changed the cost for Gender Recognition Certificates from £140 to £5, it’s been announced today (May 4, 2021). The new, more affordable pricing comes after a debate in parliament during September 2020 decided against wider reforms to the UK’s gender recognition process, which has been criticised for its bureaucracy.

As Sky News reports, Women and Equalities Minister Liz Truss said of today’s announcement, “In the National LGBT Survey, 34% of transgender people told us that the cost of applying for a certificate was holding them back from doing so. Today we have removed that barrier, and I am proud that we have made the process of getting a certificate fairer, simpler and much more affordable.”

Gender Recognition Certificates are available to UK citizens over the age of 18 whose gender is different from that assigned at birth and wish for it to be legally recognised. Currently, applicants still have to provide evidence to “demonstrate that you have lived full time in your acquired gender for at least two years” and that they have been diagnosed with gender dysphoria by medical professionals. They also need to provide a declaration that you will permanently live in your gender.

In September 2020, the government debated a number of reforms to this process. They ultimately dropped plans for people to self-identify, stating they would still need a medical diagnosis. This is when the decision was made to bring down the cost of the certificate by £135.

However, although it will now be more affordable to obtain a Gender Recognition Certificate, the gender options and processes are still being criticised by campaigners.

“It’s a shocking failure in leadership that after three years and a robust public consultation, the UK Government has put forward only minimal administrative changes to improve the process for legal gender recognition of trans people in England and Wales,” Nancy Kelley, Stonewall’s Chief Executive, said at the time. “While these moves will make the current process less costly and bureaucratic, they don’t go anywhere near far enough toward meaningfully reforming the Act to make it easier for all trans people to go about their daily life.”

Elsewhere, a petition with over 100,000 signatures is still calling for the government to legally recognise non-binary people on Gender Recognition Certificates and to be included as an option under the Gender Recognition Panel. The admission of this identity “ignor[es] members of the population,” the petition reads.

More like this
What The UK Blocking Scotland’s Gender Recognition Bill Means
By Sam Ramsden
Gen Z Are Twice As Likely To Identify As Queer, According To New Data
By Sam Ramsden
Why Being “Too Sensitive” In Relationships Is A Good Thing
By Lexi Inks
18 Hinge Prompt Answers To Try If You’re Looking For Something Casual
By Lexi Inks
Get The Very Best Of Bustle/UK
Sign up for Bustle UK's twice-weekly newsletter, featuring the latest must-watch TV, moving personal stories, and expert advice on the hottest viral buys.