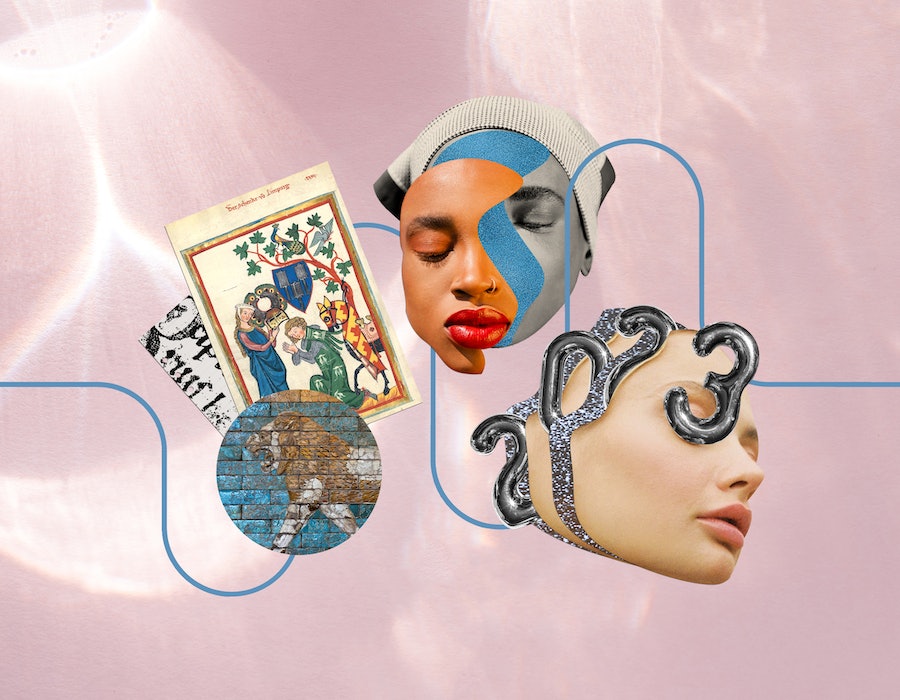 Four thousand years ago, ancient Bablyonians celebrated the new year with a 12-day festival called Akitu, in which they made promises to the gods, agreed to pay their debts, and returned what they had borrowed from friends or neighbors. It’s the earliest example we have of New Year’s resolutions. At a moment of renewal and reset, people swore to do better next time. (One practice that thankfully went out of fashion: Each of the king’s resolutions would be sealed with a slap across the face.)

Since then, resolutions have appeared throughout history. Entries in the diary of a 14th century Italian merchant resolved to be a better Christian and not have sex on Fridays. At the end of each year, knights in the Middle Ages made vows while placing their hands on a peacock called, fittingly, the Peacock Vow. The author of the 1726 book Gulliver’s Travels, Jonathan Swift, wrote how he wanted to “Not to tell the same story over and over to the same People” and “Not to boast of my former beauty, or strength, or favor with [Ladies].” A handwritten list from musician Woody Guthrie includes “have company but don’t waste time,” “don’t get lonesome,” and “keep hoping machine running.”

I can’t help it: I also use the start of a new year as a chance to become a shinier version of myself. But this year, instead of making the same resolution list I’ve always made (work smarter, go to yoga, stop impulse Instagram-ad shopping), I’m pausing to consider my “why” and my relationship to self-improvement. Why do we want to be better at all — especially when we know our ability to keep resolutions is limited?

New Year’s resolutions feel deeply personal, but the long history of self-improvement suggests that it has more to do with our culture’s values. Whereas self-improvement once revolved around a person’s character and how they relate to the world, today it has more to do with how we look, what we can do, our competitiveness in the marketplace, and how much money we have.

Asking yourself why and what you want to change, in other words, says a lot about what your world finds worthy about you. And on an individual level, it can reveal your own assumptions about your true self.

A Boston newspaper article from 1813 is credited with the first use of the term New Year resolution, and already, it was poking fun at the whole endeavor: “There are multitudes of people, accustomed to receive injunctions of new year resolutions, who will sin all the month of December, with a serious determination of beginning the new year with new resolutions and new behavior, and with the full belief that they shall thus expiate and wipe away all their former faults.”

But many of us make doomed mini-resolutions for the week every Sunday night: how many times we’ll go to the gym, how we’re going to eat well, keep our rooms clean, and get all our tasks done. Psychological explanations of why we want to improve, like self-determination theory or Maslow’s Hierarchy of Needs, say that once our basic needs are met, like housing, food, or safety, we have a desire to go beyond that. According to Gabriele Oettingen, a professor of psychology at New York University, when people fantasize about an improved future, it can be an expression of those higher needs.

“It’s what we don’t have, what we are lacking, or what we have a deprivation of,” she says. If people have a lack of meaning in their lives, they may fantasize about changing to a job that brings them purpose. Goals around losing weight could be connected to desires for more love, respect, or freedom.

We might be aware of how our habits are keeping us from having those things we want, whether it’s health, jobs, or relationships, says psychologist Christian Jarrett, author of Be Who You Want: Unlocking the Science of Personality Change. Self-discrepancy theory, developed by Columbia psychologist Tory Higgins, says that when people see a difference between their “actual self” and their “ideal self,” they’re motivated to close the gap between the two. The larger the gap is between our actual and ideal self, the more negative emotions we feel.

Studies have shown that people feel more “real” or “true to themselves” when they act according to what they think their ideal selves would do. “In other words, striving to be the best version of yourself is associated with feelings of authenticity,” Jarrett says.

Are you becoming more or less yourself when you improve? When people think about their “true self,” the essence of who they are deep down, it’s usually a version that’s morally good — who always calls their mom back and donates to charity. When we make mistakes or do things we’re not proud of, we interpret that as moving farther away from the true self. It’s no wonder we are drawn to self-improvement then, if it’s seen as the tool to uncover the real, true you.

“There is this intuition that there’s this even better version of me within. If I keep carving away and making these improvements, I’m going to keep getting closer to it.”

There’s almost definitely not such a thing as a literal separate true self, says Rebecca Schlegel, a social personality psychologist at Texas A&M University who studies the true self and authenticity. But it’s a powerful feeling that we can’t seem to shake.

I understand the desire to ascribe my “true self” to the version of me that does yoga everyday and takes her vitamins. But there’s danger here too: By casting off my other behaviors and traits as “not really me,” it risks turning my “self” into a never-ending project to exhume the real me. That urge can easily go into overdrive.

“There is this intuition that there’s this even better version of me within,” Schlegel says. “If I keep carving away and etching away and making these improvements, I’m going to keep getting closer to it.”

As consumers, we’re bombarded with the $10 billion self-improvement industry, including books, products, programs, apps, and influencers, all of which make the whole thing feel like a modern phenomenon. But when Anna Schaffner, a professor of cultural history at the University of Kent, started to look at the history of self-improvement, she found that this striving for the ideal self is old — really old.

But there are crucial differences between the self-improvement in the past and today. There’s been a shift from the focus on virtues and the aspiration to be good in an ethical sense to being good at something. This shift occurred in the late 19th century, Schaffner says, but even as recently as a 1947 Gallup poll, the No. 1 resolution was to “improve my disposition, be more understanding, control my temper,” followed by “Improve my character, live a better life.” The most popular resolutions in 2021 were people wanting to exercise more, improve their fitness, lose weight, save money, and improve their diets.

Within the modern focus on appearance is the belief that a good life comes mainly from creating the perfect body. “This is a fundamental value shift in what we think makes a good life,” says Heather Widdows, a philosopher at the University of Warwick. Of course, physical appearance has always mattered, but it’s now seen as a moral imperative, she argues, like integrity or honor. It’s a virtue unto itself to look a certain way.

She doesn’t think there’s anything wrong with wanting to improve and that humans are likely happier when they’re striving for something. “I just don’t think we have recognized how different self-improvement as body-improvement is,” says Widdows, author of Perfect Me: Beauty as an Ethical Ideal. “It’s not at all what we have traditionally thought of as self-improvement.”

This is paired with a more narrow and globalized ideal of what that body is supposed to look like. “We have, without really being aware of it, bought this view that a better body will be a better self, and that better self will have a better life,” she says. “Even though, when you look at the connections, it doesn’t really work.”

We might blindly feel that our resolutions are going to put us on a path to get to ourselves. But asking why and what you want to improve can expose surprising feelings about the self back to you.

The “true self,” is a very Romantic idea (historically Romantic, from the period 1800 to 1850). The French philosopher Jacques Rousseau thought that we were all born good, and then we got damaged by our parents, by society, and by cultural norms, and that it was our task to come back to our pure starting point. A lot of self-help today revolves around self-realization: that we have enormous untapped potential that we need to liberate.

“This is a historically specific way of looking at yourself — it hasn’t always been seen that way,” Schaffner says. “Self-realization is one of the biggest cultural values of our time. We have to self-realize in our jobs and our professions in our love lives, in the way we identify and see ourselves.”

How do you see your “self”? Do you think you have no self, that your self is bound up in others and in your community, or do you believe in a continuous stable self, perhaps even a morally good true self? “Is the self seen as atomistic or relational?” Schaffner wrote in her book. “As fundamental good or bad? As primarily rational or emotional?"

Ancient models often thought about the self as a relational identity — they saw the self as part of a larger context, embedded in social structures. “This embeddedness was really crucial to the understanding of self,” she says.

This is in line with what the philosopher Bertrand Russell wrote in his 1930 book The Conquest of Happiness. He shared how he used to fixate on all the things that were wrong with himself, his “sins, follies, and shortcomings,” and it made him miserable. “Interest in oneself on the contrary leads to no activity of a progressive kind,” Russell wrote. Instead, he “learned to be indifferent to myself and my deficiencies; I came to center my attention increasingly upon external objects: the state of the world, various branches of knowledge, individuals for whom I felt affection.”

This year, when I make my resolutions, I’m going to try both to turn them outward to the ways I can positively impact the world around me and also to make them character driven, rather than performance driven. For example, I might try to be a good sister, put effort into communicating my feelings to others more clearly while dating, or do one activity per month that helps the community I live in.

This is a different definition of improvement that might mean being better able to “live consciously and deliberately and to direct our energy outwards,” Schaffner says.

Yet I am still going to try to improve, and Schaffner think’s that’s OK. At the end of the day, she sees self-improvement as a deep-seated human behavior that we shouldn’t give up on. She even called it “noble.”

How we choose to improve, in the face of the freedom to be or do whatever we want, could be a better way to assess authenticity, rather than trying to attain a nebulous concept of “true self.” Importantly, improvement should be a gradual process. “One of the great myths of our time is this radical, effortless transformation of the self,” Schaffner says.

More like this
Why Being “Too Sensitive” In Relationships Is A Good Thing
By Lexi Inks
18 Hinge Prompt Answers To Try If You’re Looking For Something Casual
By Lexi Inks
Why We Love Investigating Friendship Breakups
By Carolyn Steber
Another Side Of Rupert Grint
By Maria Sherman
Get Even More From Bustle — Sign Up For The Newsletter
From hair trends to relationship advice, our daily newsletter has everything you need to sound like a person who’s on TikTok, even if you aren’t.