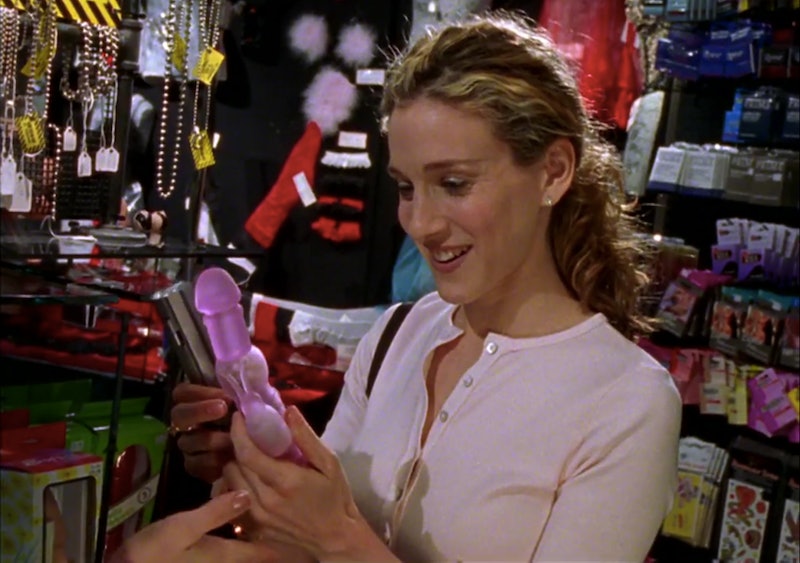 With unemployment rates skyrocketing and shelter at home extended, experts are predicting a recession that could be worse than the Great Depression. But amid an economic crisis, with restaurants and retailers closing their doors and larger companies laying off and furloughing employees, the sex tech industry is booming.

Nox, an online sex toy retailer, based in Montreal, reports a 97% increase in sales since March. Sex toy company Dame Products also witnessed a 30% increase since February, and sexual wellness brand Unbound has been selling twice as many wands and plugs as they normally do. And that's just the beginning.

Before their brick-and-mortar shops closed in accordance with the government shutdown, sex toy boutique Babeland saw a "huge rush" of customers stocking up on lubricants and safer-sex barrier methods like condoms. As they continue to sell products online, Babeland says they have seen notable spikes in cities that started social distancing sooner, like San Francisco and New York City.

Take LELO, a Swedish intimate lifestyle company that says sales have increased by 185% since this time last year. Or ZALO USA, a luxury sex toy brand that has doubled its sales over the past couple of months. Zoë Ligon, CEO of sex toy shop Spectrum Boutique, tells Bustle the shop has been "Busy as f*ck!" And modern sexual wellness company, maude, reports lubricant sales up by 15%, and their "vibe" was completely sold out (don't worry, you can still pre-order it).

Sex toys have become the apocalypse product to stock up on.

Wondering what the hell is going on? According to Samantha Caffrey, a representative for Womanizer, We-Vibe, and pjur (three pleasure brands with sales up 263% from last March in countries that started quarantining in March, like Italy and Spain), sex toys have become the apocalypse product to stock up on.

"Sex toys have become the latest [must-have] subject to consumer stockpiling," Caffrey told Bustle. "This is likely due to people all over the world being encouraged or mandated to stay home."

Alicia Sinclair, founder, and CEO of luxury sex tech brands Le Wand, b-Vibe, and The Cowgirl, has also noticed costumers stockpiling or "collecting" items in the wake of social distancing.

“The unique pattern, which reminds me a little bit of grocery store hoarding, is people buying not just a wand, but a wand and every single accessory option," Sinclair tells Bustle. "I don't know how else to call it — it's sort of like collecting or 'all-in' buying."

Though economic crises and sex toys may seem like an unlikely pair, Hallie Lieberman, sex historian, and author of Buzz: A Stimulating History of the Sex Toy, says that stressful times fuel sexual exploration.

"Customers want sex toys in a recession," Lieberman tells Bustle. "Sex tech did well in 2008, and it seems like sex toy companies are doing well now."

According to Lieberman, the current climate mimics the spike sex tech witnessed during the 2008 recession. "At places like Jimmyjane, sales went up 50% between 2008 and 2009," Lieberman says. "The sex toy spike also happened in England."

When the 2008 recession hit, sex tech was one of the only industries that wasn't gravely affected — the industry became this really interesting non-essential essential.

In 2017, Statistics Market Research Consulting reported the global sexual wellness market to be a $39.42 billion industry, estimating that by 2026, it will reach $122.96 billion. While newer sex tech startups, like maude or Dame Products, hit the market years after 2008, veteran companies like Doc Johnson Enterprises (established in 1976) have seen a pattern of sales spikes during times of economic adversity.

"When the [2008] recession hit, sex tech was one of the only industries that wasn't gravely affected," Chad Braverman, COO and CCO of Doc Johnson, tells Bustle. "The industry became this really interesting non-essential essential."

Although Braverman says he wouldn't consider sex tech as "recession-proof," like alcohol or tobacco, he shares that, in times of economic strain, people are more inspired to shop for something sexy.

"Watching people realize that their money is going to be tight really soon, it’s like, 'alright, what do I need?' I need my groceries, maybe I need a little booze, and then maybe I need a new sex toy or my first sex toy," Braverman says.

Like Doc Johnson, sex toy company Tracy's Dog has also witnessed an increase in first-time buyers. According to a recent poll of costumers aged 18-65, 37% of sales during the pandemic were purchased by people getting their first sex toy ever.

When asked why they were stocking up sex tech, 13% reported having "sex toy FOMO," noting that self-isolation had inspired them to let go of previous beliefs that kept them away from exploring sex toys.

Dr. Helen Fisher, Ph.D., biological anthropologist, senior research fellow at The Kinsey Institute, and chief scientific advisor to Match.com isn't surprised by these numbers. In fact, she says there's some science behind why people reach for sexual gratification during times of intense stress.

"When you first feel stressed, it drives up the dopamine system in the brain, which triggers testosterone, the hormone of sexual desire," Dr. Fisher tells Bustle. "With a partner or without a partner, it's going to stimulate the desire for sex."

But as lockdowns continue across the country, coronavirus-anxiety continues to ebb and flow. While initial stress can increase your dopamine system, Dr. Fisher says that over time, chronic stress decreases the dopamine system, making it harder to get excited or aroused. While this may seem like a sex tech deterrent, decreased dopamine levels may actually encourage people to try sex toys.

"The stress, in the beginning, can drive you to buy sex toys in order to relieve stress and have more fun," Dr. Fisher says. "And as the stress carries on, dopamine will reduce, and sex toys can help you sustain the good feelings of orgasm and connection."

Hallie Lieberman, sex historian, and author of 'Buzz: A Stimulating History of the Sex Toy'