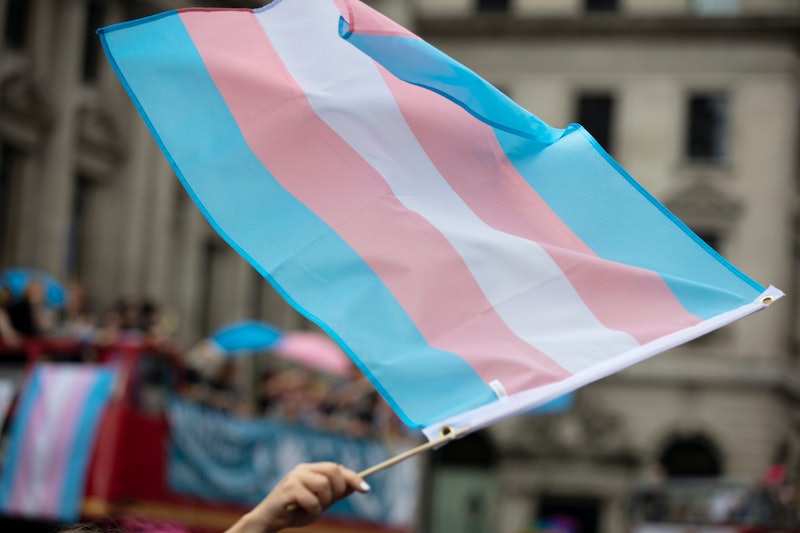 As trans activists and allies prepare for further protests to protect trans rights in the UK, a promising new survey by YouGov and PinkNews has revealed the majority of women support trans people’s right to self-identify. The findings show 57% of women "agreed that trans people should be able to self-identify as their chosen gender," compared to 43% of the men surveyed.

"Transgender and non-binary people know that we are who we say we are,” says PinkNews‘ gender and identity reporter Vic Parsons of the survey. “Public support for self-identification doesn’t change this – but it is still somewhat of a relief, given the horrifying levels of anti-trans rhetoric in the media."

As detailed in Bustle, the reforms would have enabled people to change their birth certificate without the difficulties and trauma associated with medical diagnoses. It would have also meant moving away from a system that classifies those who identify as trans as having a mental illness.

The revelation is a huge blow to the UK's trans community, but there are ways you can help them at this time from petitioning to donating to trans charities.

The statistics are heartening after a particularly challenging few weeks for trans people, with transphobic comments from JK Rowling making headline news. On June 7, the Harry Potter author sent the internet into a tailspin when she tweeted, “If sex isn’t real, the lived reality of women globally is erased. I know and love trans people, but erasing the concept of sex removes the ability of many to meaningfully discuss their lives. It isn’t hate to speak the truth.”

Rowling later doubled down on her anti-trans rhetoric in a blog post, which included the suggestion that allowing transgender women to use women's toilets could result in assault.

"When you throw open the doors of bathrooms and changing rooms to any man who believes or feels he’s a woman — and, as I’ve said, gender confirmation certificates may now be granted without any need for surgery or hormones — then you open the door to any and all men who wish to come inside. That is the simple truth," she wrote.

While Rowling believes that "new trans activism" is a threat to women's rights, the YouGov survey would suggest that the majority of women do not share her views.

More like this
Gen Z Are Twice As Likely To Identify As Queer, According To New Data
By Sam Ramsden
The UK Government Is *Finally* Banning Conversion Therapy
By Sophie McEvoy
Here’s Where The NHS Nurses’ Strike Currently Stands
By Sophie McEvoy
What The UK Blocking Scotland’s Gender Recognition Bill Means
By Sam Ramsden
Get The Very Best Of Bustle/UK
Sign up for Bustle UK's twice-weekly newsletter, featuring the latest must-watch TV, moving personal stories, and expert advice on the hottest viral buys.