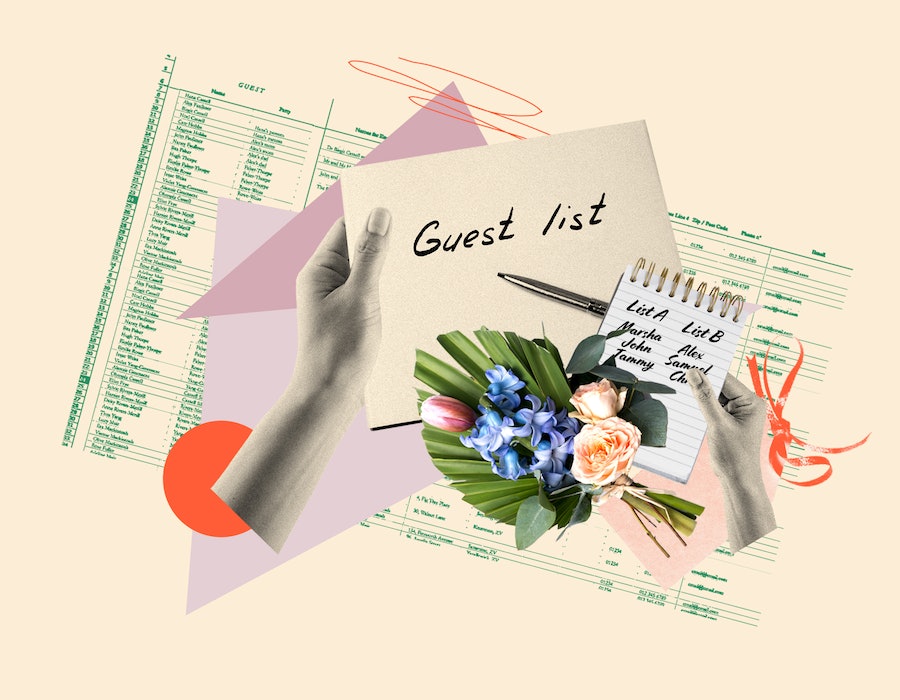 One small silver lining of planning a wedding post-2020: People are understanding of small wedding guest lists, and (most) won’t be offended if they don’t make the cut. That said, you, your partner, and your parents all likely have strong feelings about who you want there for the big day. And when we say guest list, we actually mean guest lists. “It is best to do an A-list and a B-list,” says Heather Odendaal, owner and principal planner of Weddings by Bluebird in Whistler, British Columbia. You can even do a “nice to have” list that can include coworkers, kids, and other people who can be added on if space opens up.

When Should You Actually Start Planning Your Guest List?

Your desired guest list will dictate your venue space, so it’s a good idea to have an informal idea of how big you want your wedding to be as soon as you begin to consider spaces and dates, says Odendaal. “Many things are changing every day [in these times] — capacities, travel restrictions, event restrictions — [so] it's best to set the guest list on a shorter timeline. I would say no sooner than six months out.” That said, you may want to give some A-list guests, like grandparents and anyone who has to travel a significant distance, a heads-up as soon as you book the venue.

How It Worked IRL

Sometimes, the best way to know who you want at your wedding is to decide who’s off the list. “We decided that we wanted to keep our wedding intimate,” says Shari, 28, from Reston, Virginia. “To us, that meant that we had to know our guests. That meant we didn’t invite a lot of parents’ friends. I’m glad we held firm on that.” Another thing to consider early on are plus-ones. “I was single during my 20s, and I hated how I wasn’t invited with a plus one, when my friends who had boyfriends or girlfriends were,” recalls Amina, 28, from Boston, Massachusetts. “So I knew I wanted everyone to be invited with a guest. This meant that there were some people we didn’t know, but everyone had a blast.”

Finally, it can be a good idea to start small and grow from there … and be flexible as the list evolves. “Initially, I was disappointed when some people I considered ‘musts,’ like my aunt and uncle, couldn’t come because they weren’t comfortable traveling,” recalls Faith, 31, from Sebastopol, California. “But then I realized that meant I could invite local friends who I might not have invited.”

The Best Hacks To Cut The Hassle

Organize your B-list according to preference, says Odendaal. If you have several lists, you may want to send out your original invites earlier than anticipated, with an RSVP date at least six to eight weeks before the wedding, so you have time to invite people on your alternate list. Another pro tip: Whether you use Excel or another program for your master guest list, set it to “view only” for everyone except you and your partner. That way, there aren’t multiple people editing and revising the list at the same time.

Heather Odendaal, owner and principal planner of Weddings by Bluebird

More like this
Breeding Kinks Have Been On The Rise Since Roe V. Wade Got Overturned
By Lexi Inks
21 Signs You're Not In Love Anymore
By Sara Altschule, Kathleen Ferraro and Carolyn Steber
30 Clever Ways To Slide Into Your Crush's DMs
By Griffin Wynne, Carolyn Steber and Lexi Inks
6 Dating App Tips To Try If You're Looking For A Serious Relationship
By Lexi Inks
Get Even More From Bustle — Sign Up For The Newsletter