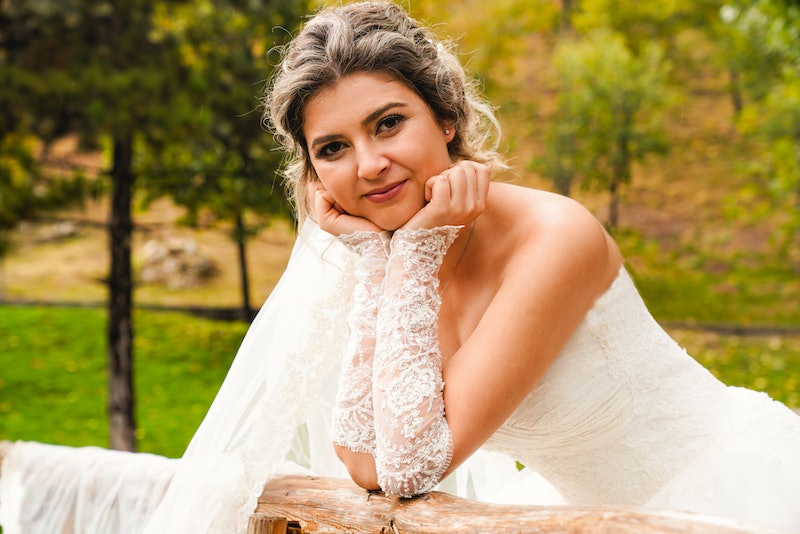 When my partner and I decided to get married, we knew one thing: We wanted the wedding to be small, but we did still want a wedding. The question then became — as it is for every couple — what does the idea of “a wedding” mean for us? The answer, as it turns out, has been something I’ve come to think of as a “micro-wedding.”

Neither my partner nor I had the desire for a Wedding With A Capital W; we’re both relatively introverted, and the idea of getting hitched during a giant event made both of us feel anxious, rather than excited. We did, however, know that a courthouse wedding or an elopement wasn’t quite the right choice, either: We wanted our immediate family and closest friends to be there with us (no small feat, given that they’re scattered all over the country; we wanted to have a celebration; and to be honest, I wanted to be able to wear a spectacular dress which I will never again have an occasion to wear again for the rest of my life (because when the heck else can you go full-on evening gown if not at your wedding?) — none of which would have been feasible if we’d gotten the first available courthouse date or gone off to get married quietly on our own.

We’re still in the planning process, but what we’re ending up with is something that lies somewhere between a Wedding and eloping: It’s a wedding, with a few of the standard wedding details, but it’s small, and the reception in particular is going to deviate from what’s considered the norm these days. But the most important thing about it is this: It’s exactly right for us.

It’s a commonly made argument that the wedding isn’t actually for the couple who’s getting married; it’s for everyone else. Frankly, though, I think that’s bullsh*t. First off, without the couple getting married, there wouldn’t be a wedding in the first place — but more importantly, it is mind-blowingly unreasonable to expect that just because two people have decided to tie the legal knot, they (or their families, or whoever else might hold the relevant purse strings) are obligated to throw an enormously expensive party for everyone they’ve ever met. That viewpoint smacks of entitlement, and it’s not doing anyone any favors.

For my partner and me, “marking the occasion” means a micro-wedding, because that’s what makes the most sense for us. This isn’t to say that big budget weddings are bad; if that’s what’s right for you, go for it (and the same goes for having a city hall wedding or eloping, too). But all of this is to say that you don’t have to have a giant shindig if it’s not what you and your partner want.

Here are some of the pros of throwing a micro-wedding:

1. There Are Fewer Details To Worry About

Things my partner and I are not worrying about booking, hiring, finding, paying for, organizing, etc., include, but are not limited to: Rustic chic décor; a photo booth; a DJ; a live band; audio rental equipment; a zillion place cards; a complicated seating plan; addressing a million invitations by hand; a giant, multi-tiered cake that doesn’t actually taste very good; flowers pinned to every person we happen to be related to; a unity candle; doves; a sand ceremony; a rose ceremony; a signature cocktail; matching outfits for an army of attendants; and a ring bear(er).

If any or all of those details are things you would like to have at your wedding, fantastic; the only right choices when it comes to wedding planning are what work for the people whose wedding it actually is, and a ring bear(er) might well be the right choice for you. For us, though, the right choice meant looking at that list, looking at each other, and just going, “…Nah.” The upshot is that it’s making the planning process a lot more streamlined — there’s less that we have to do to prepare, and in theory, there will be less that can go wrong on the day itself. It’s taken a ton of stress out of the experience, which has certainly helped make it fun instead of stressful.

2. It’s Easier To Keep The Costs Down

I mean, don’t get me wrong — it’s still going to cost money, and we are definitely still in super savings mode for pretty much the rest of the year. The good news, though, is that because we’re keeping the costs down by keeping the wedding small, we don’t have to dip into the savings we already have in order to fund it. Of course you can do a huge wedding cheaply, and of course a small wedding can still be expensive; again, whatever option is right for you is the right way to go. For us, that was having something that looked kind of like a wedding, but without a lot of the pomp and circumstance.

A lot of where we’re cutting costs is in having a tiny, tiny guest list — fewer people basically means less of everything, from food to favors — but we’ve also opted to shave off stuff in other places, too. For example, the venue is beautiful enough on its own that we don’t really need to drop a bundle on decorations — and besides, as A Practical Wedding points out, your guests probably won’t remember the decorations anyway. They’ll remember you and your newly-minted spouse accidentally bonking heads while going in for the kiss that seals the deal and laughing about it uproariously. They’ll remember the flower girl falling asleep in her cake. They’ll remember the human moments, rather than the centerpieces adorning each table. And the human moments? Those are free.

But back to that tiny, tiny guest list for a moment:

3. You’ll Actually Get To Spend Time With Your Guests

One of the biggest benefits of having a small wedding is a small guest list, and one of the biggest benefits of having a small guest list is this: Instead of trying to say a passing hello to 150 people (many of whom you may not actually know all that well), you get proper face time with everyone there. Also, if you’re an introvert like me, you don’t have to worry about having a huge number of social interactions with a giant crowd of people. Those kinds of situations can be extremely anxiety-inducing if you’re not a people person — and I don’t know about you, but “anxiety-inducing” is not what I would like to call the time at which I agree to spend the rest of my life with this really great person whom I adore.

Our reception is where we’re departing the most from what people tend to think of when they think of the modern wedding: We’re not bothering with a DJ, or a grand entrance, or a first dance, or even dancing at all. Neither one of us really has an interest in it, so none of that felt right to us; we’d much rather just eat delicious things, have some wine, and hang out with our favorite people, so that’s what we’re doing instead. We’re building a reception playlist ourselves; the plan is to plug a laptop into a portable sound system we already know we have access to so there’s some background noise, but it won’t necessarily be meant to get people up and dancing. Although if they decide they want to dance to whatever we’ve got playing, that’s cool, too. Anything goes, as long as people are having fun (and, y’know, not destroying property or anything).

This point is true for big weddings, too, but one of the most freeing aspects of planning a small wedding was realizing that just because wedding receptions usually follow a certain format, they don’t have to.

Again, this is true for all weddings, but consider things like how much easier of a time you’ll have finding an alternative venue if you’re not trying to fit several hundred people into it. Consider how much fun it might be to have your favorite food truck instead of traditional catering. Consider whether you want to cater your wedding yourself, if that’s what you’re into. It’s not easy to plan a major event for 100 people or more; if that kind of event doesn’t do it for you, you can plan it for just a couple instead, which in turn will allow you to get more creative about it by sheer dint of the fact that you won’t have to provide food, drinks, party activities, and space for such a huge crowd.