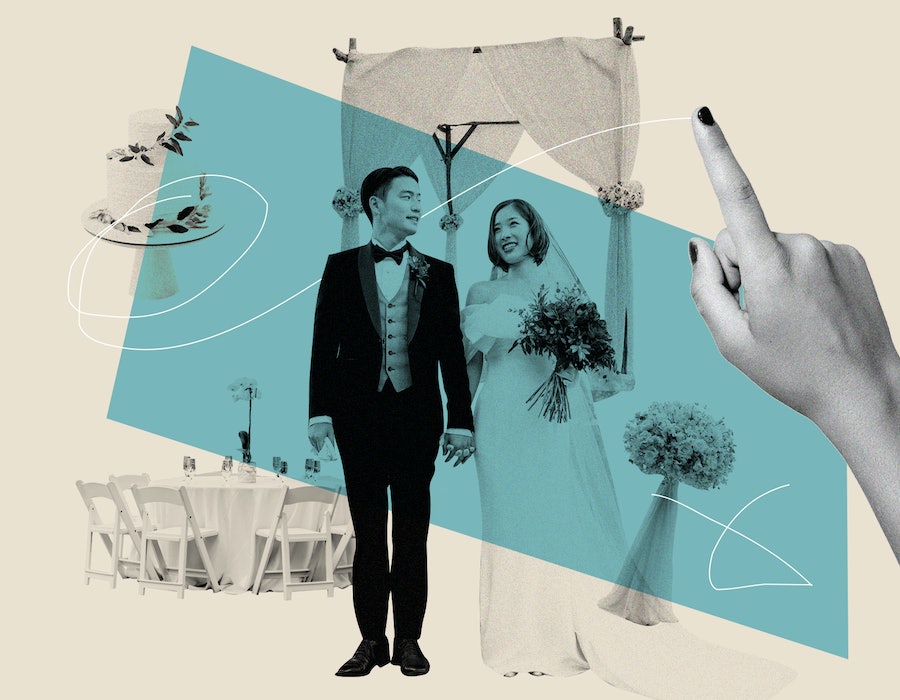 Lara Mahler was planning 34 weddings when COVID-19 hit. As founder of The Privilege Is Mine, she quickly launched three online packages, each with services including weekly Zoom calls and month-to-month commitments. Given that many clients still wanted to celebrate their original wedding dates, Mahler also launched ALT. WEDDINGS for virtual and micro nuptials with 20 guests or less. “People still want to get married right now, which is the exciting part. What's going to change is the way that we do it,” Mahler tells Bustle. “Right now we’re just kind of improvising — at least, I am.” Here, she reveals what planning her first pandemic micro wedding was like.

I just did my first ceremony since March and married a couple on their Tribeca rooftop. They quarantined there, they’re working there, and now, they got married there. They're going to look back on this year and see it as unbelievable, but also kind of special.

They were supposed to get married in June in a restaurant with 100 guests, but that obviously couldn’t happen, so they decided within a month to put this together. Wedding planning typically takes six to 12 months, and sometimes beyond, but I communicated with this couple for two weeks and then we just went with it.

For me, the short time frame wasn't stressful, though it may have been for the couple. They had to postpone their wedding during a lockdown and then figure out a way to do it while things are changing daily. They still hope to celebrate with family in 2021, but they didn't want to waste time — they just wanted to get married.

First, I had them fill out a questionnaire to help create their ceremony. Then, I checked in about getting their marriage license and made sure they’d have witnesses present who could sign it. Since I was helping them with the setup and breakdown afterward, I gave them an inventory list of everything they’d be bringing and what they’d need help with. After losing some money from the postponement, they decided to DIY their flowers and decor.

Usually, I have an assistant with me on a wedding day, but the prep for this was much quicker and more straightforward than usual. I took an Uber — the second Uber I’ve taken since February or March — and met them in their apartment wearing a mask. It was the first time in the pandemic that I entered someone else's home that wasn't my family's. Being around people you haven't been surrounded by in quarantine already feels a little different, especially when you're wearing masks.

"As soon as it was over, the couple put their masks back on."

We went up to the roof to set up the ceremony structure, flowers, rugs for the ceremony area, a table for snacks and drinks, and a Zoom station so a small group of close family and friends could tune in. From there, we got started.

I was standing against the rail of the rooftop, and the couple was 6 feet ahead of me within the ceremony structure. Their six guests were 6 feet away from them, with chairs about 4 to 6 feet apart from each other. We had someone else taking care of the Zoom portion. The vendors — the photographer and videographer — were 6 feet apart from each other and wearing masks the entire time.

The ceremony was so emotional. They both were crying at different times throughout and seemed genuinely happy. And as soon as it was over, the couple put their masks back on.

The guests were so excited to be there, but also willing to help any way they could — whether it was with the couple's dog, Sally, who was the "ring bearer," or making sure family members could be heard on the Zoom call.

After the ceremony, the couple had their first dance. Other than that, there was no music or dancing, though DJs are an option for micro weddings. Then, we all went to a table that had champagne, mimosas, and fruit. The event was quick — about an hour to an hour and a half. And then the couple went about their day.

What was really different was the casualness of this celebration. The couple never wanted a large wedding. Because the restaurant they were getting married at had a guest minimum, they were like, "OK, well, I guess we're having 100 people." Once they couldn't do that anymore, they were able to have the intimate, relaxed ceremony they’d always wanted.

Sometimes I joke with my couples that things are going to go wrong because in everyday life, there's no perfect day. Sometimes you're stuck in traffic. Sometimes you miss the train. So you can't expect everything on your wedding day, with 150-plus guests and 10 vendors, to go smoothly. Obviously, it's our job to make sure everything is happening the way that it should. But ultimately, if you leave at the end of the night married, it's a success.

The dance party, the food, the photo booth — all of that is just frills. So it was interesting to see, when all of that is stripped away, what a wedding truly is at its core. And really, it's just about celebrating love, being married, and a couple's partnership.