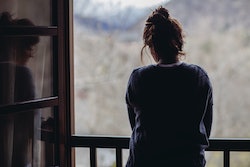 The term "daddy issues" has been a part of our cultural lexicon for quite some time, but the meaning and definition of trending terminology often becomes skewed over the years. Sometimes it's used as a derogatory term, usually aimed at women who date older men. Other times, it's used in reference to attachment issues or a complicated relationship with one's father. To help clear things up, below, Dr. Carla Marie Manly, Ph.D., a clinical psychologist and author of Joy from Fear and Date Smart, explains the meaning of daddy issues, the signs, and how to overcome them.

The Meaning Of "Daddy Issues"

According to Dr. Manly, "daddy issues" refers to someone having a poor or nonexistent relationship with their father that resulted in lasting psychological harm. "In essence, the adult child with daddy issues unconsciously thinks and behaves in ways that are an attempt to repair or repeat psychic wounds that stem from the father-child relationship, or lack thereof," she tells Bustle. She adds that generally, the term refers to a father-daughter relationship, but any gender can be affected by these issues.

While it's not technically a clinical term in psychology, Dr. Manly says daddy issues are believed to have originated from the "father complex" developed by Sigmund Freud and Carl Jung, which she says "describe the unconscious impulses and associations that develop in regard to the father archetype."

With that in mind, what exactly do people mean when they use the term daddy issues? Dr. Manly says it depends on the context of the situation. For instance, you may hear the phrase used when referring to someone's tendency to favor relationships with men who are significantly older than them, as in old enough to be their father.

While some people may use the term very loosely or playfully in reference to someone's fondness for older partners, Dr. Manly says in some situations, people use it to refer to unhealthy behaviors that could benefit from psychological care, particularly when the father was absent, abusive, or emotionally disconnected.

"Given that it is natural to want to be loved, protected, and connected to one's father in healthy ways, a lack of healthy father-child connection can create a host of issues in real life," Dr. Manly says. She adds that the desire to be with men who are significantly older and embody fatherly attributes stems from having a father who was absent physically or emotionally.

Dr. Manly says other signs of daddy issues can include a lack of trust, especially in men; a tendency to idolize certain men who appear strong and protective; over-pleasing tendencies particularly toward men; jealousy within intimate relationships; an insatiable need for approval from older men; and a lack of self-esteem.

The type of daddy issues also impacts how it shows up in adulthood. For example, Dr. Manly says if a child was extremely spoiled by their father, they might demand the same type of over-indulgence from their partner. Conversely, if a child was ignored or not treated well by their father, that can look like anxiety and attention-seeking behaviors as adults. And if the father was abusive, signs of daddy issues can look like passive behavior (e.g. giving in to the daddy figure’s demands), gravitating toward controlling male figures, or engaging in abusive relationships.

How To Overcome “Daddy Issues”

Daddy issues are something that you can heal over time. The first step, Dr. Manly says, is increasing your awareness of the psychological wounds from early childhood. Journaling is one tangible way to do this. "Nonjudgmental, free-association journaling that focuses on the father-child relationship is a wonderful way to delve into daddy issues,” she says.

If you need some guidance with your journaling practice, Dr. Manly recommends writing down an objective list of the behaviors you find problematic, such as giving away your power to older male figures. "Psychological wounds cannot be healed unless they are noticed and given proper, nonjudgmental attention," she says. "Processing and tending to the often hidden childhood pain that gives rise to daddy issues often result in empowering and life-changing personal growth."

With this newfound awareness of your behaviors, Dr. Manly says you can then choose to engage in different behaviors in the future. And if needed, she recommends seeking professional psychological care to help treat these issues.

More like this
18 Hinge Prompt Answers To Try If You’re Looking For Something Casual
By Lexi Inks
Why We Love Investigating Friendship Breakups
By Carolyn Steber
12 Active Date Ideas That'll Get You & Your Boo Outside
By Lexi Inks
Why Being “Too Sensitive” In Relationships Is A Good Thing
By Lexi Inks
Get Even More From Bustle — Sign Up For The Newsletter
From hair trends to relationship advice, our daily newsletter has everything you need to sound like a person who’s on TikTok, even if you aren’t.